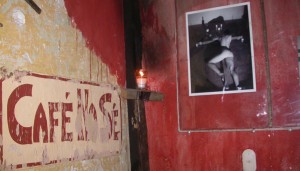 Semana Santa is presently washing over us like a tsunami of purple robes with thousands of floating – then sinking – now sinking, now floating again – cross-bearing effigies.  It is a beautiful time of year. Neighbors get together and make gorgeous alfombras, the intricate flowered carpets that take hundreds of man-hours to create and then have half-lives slightly shorter than that of a fruit fly. Tourists pour into little Antigua from the whole world over to witness the depth of devotion that Guatemalans have for the suffering of their Savior, while making the streets utterly impassable. The copal incense is fired to remind la gente that these are not ordinary days; these are the Holy Days, and the air becomes so thick that the black, diesel exhaust pouring from the rusted pipes of chicken busses is barely noticeable. The trumpets, tubas and drums that give cadence to the processions and penitents play so mournfully that even the volcanoes in the distance seem to lower their shoulders and pay their respects.

Holy Week in Antigua is like nothing else in the world, and when it is over, you will be certain of one thing.  The good people of Guatemala believe that Jesus suffered publicly and died publicly. Semana Santa, while beautiful, is dark and filled with spiritual silence and introspection.

As to the subsequent resurrection, well, in Antigua that kinda gets glossed over. There is a procession or two on Easter Sunday, and they are generally more spirited and uplifting, but also very sparsely attended.

Though we are both Collapsed Catholics, we honor the seriousness and solemnity of the brothers and sisters of our former faith – and we are left, ourselves, to recollect how differently Easter was celebrated in our home towns years ago.

Growing up Catholic, we performed ritual self-abnegation every Lent, prayed the Stations of the Cross and went to Church on Easter Sunday, but all that seemed just a prelude to the true celebration as it existed in Los Estados. By which, of course, we mean that after a gorging brunch, we’d go out to hunt for eggs in the back yard that had been steathfully hidden by a magical giant rabbit.

The more we reflect on the Easter Bunny, the more we think that whomever came up with the idea was brilliant. The Easter Bunny is, somehow, a beautiful link between the surreality of human existence and the surreality of the promised eternal life of Christianity. It is a very subconscious part of so many children’s spiritual and philosophical education. The Bunny is a grand icon that imprints upon the mind of the child that life is often utterly absurd and freakish, that it doles out rewards unjustly and unevenly, and that, maybe, you should get ready to be sold a smiling and artificially sweetened  bill of goods for the rest of your life. Yet, if you believe hard enough, then maybe you’ll be able to eke out a reward of unwarranted sweetness at least once a year, when the days turn magical.

We’ve long since found that the tasty treats of Easters past no longer bring joy. Chocolate is for children and for trying to paste over your indiscretions with your loving, and tolerant, partner in crimes of the flesh. These days we’re more given to spending the Holy Week in dark bars with sexy bartenders who bring us booze with a disinterested smile, and we encourage you all – whatever your faith – to come on down and join us at Café No Sé for some absolution in alcoholic ablution. While we can’t promise Peace on Earth or Good Will to Men, we do know that it is possible to drink enough to hallucinate into existence Giant Rabbits (one named Harvey keeps making the rounds) and maybe even find an night or two of salvation.

With that, we wish you all a spiritually purifying Semana Santa, an ecstatic Easter and a terrific transubstantiation with whichever libations you prefer. Make ours a mezcal.

Letters From The Editors - A Late November Letter From the Editors