Would you say you are dumber than most people? It’s a serious question. When you think about yourself, your brain, do you think, “You know, I’m not real bright. In fact, I’m kinda stupid. Maybe I’m not rock-chewing stupid, but compared to the people I see every day at the Gas-N-Sip, I am a bit of a boob, maybe even a nincompoop.”

I’m guessing that you don’t feel that way, and as you are reading THIS magazine, you’re probably right, but I’ve still gotta ask: If you’re NOT dumber than half the people in the world, then why in the fuck would you ever use TripAdvisor? Their entire business model is built around convincing you to take the advice of janglewits, and if you can’t see that, then maybe, you know, you should reconsider your answer to the original question.

TripAdvisor, for those of you who don’t know, is a crowd-sourced rating site for hotels, restaurants, bars and services providers. The notion is that all sorts of folk travel all over the world eating, drinking and sleeping at all sorts of places and TripAdvisor provides them a place to either praise or bitch about those experiences. At first blush, all seems well and good, but what it fundamentally means is that really stupid people get a say in the options you will see if you rely on TripAdvisor to plan your next trip. By definition, half of the people who review restaurants, bars and hotels on TripAdvisor are dumber than the other half, and dumb people tend to like dumb, lowest-common-denominator stuff. Thus, the stuff on offer in a market that caters to dumb people prioritizes mass appeal over unique adventures and experiences.

Using TripAdvisor gives idiots an audience and encourages them to keep pecking away at their keyboards when they should actually be out doing dumb-people work. Those ditches aren’t gonna dig themselves, dammit.

Of the top 100 restaurants in Antigua, Guatemala, forty-five have a four-and-a-half-star rating! Nearly all of the rest receive four stars! Wow! All food is equally good!

DEMOCRACY IS A LOUSY IDEA:

The Dooley family is descended from the High Kings of Ireland, just like every other clan of paddy-mutts on the planet, so you’d think we’d be a democratic bunch — and when it comes to ordering a society, we are — but when it comes to figuring out where we’ll order our next drink? Are you fucking mad? That takes a discerning mind and a refined sense of the trade in strong whiskeys. Telling us where to drink is not the job of a fraternity brother whose other contribution to our society is sticking his dick in a punchbowl. Look, the whole reason democracy exists as an institution is not that it will give us a good government. It doesn’t and won’t. Rather, the point is when choosing a ruler, it’s safer to vest power in the idiots than a tyrant because the idiots can’t manage to stay on task for more than a few minutes at a time. Democracies stagger from hither to yon, repeatedly doing dumb shit — but all the dumb shit they do tends to balance out the boat and keep it moving forward somehow. That’s a very good thing. Dictators get mean over time and then pass their crowns to some bastard like Caligula or Asshat III. Better the plebeian wobble than the clown hammer of despotism, BUT THAT DOES NOT MEAN WE SHOULD TRUST STUPID PEOPLE WITH OUR VACATION PLANS.

Of the top-ten restaurants in town, two received four stars. So did the restaurant ranked one-hundred and first — McDonald’s!

EXPLORE ON YOUR OWN, FOR FUCK’S SAKE:

TripAdvisor, Yelp!, or other crowd-sourced tools are fine for what they are, and they probably do help the birdbrains and the simpletons follow the crumbs to their next cookie, and for sure, many of the restaurants, bars and hotels that top the lists are excellent joints, but we beg you to travel like a real person. If you’re here, you’re making a conscious choice to leave your bullshit behind so that you might wade, sweetberries-deep into another world. So do it. If you wanna find a place to drink, wander down the streets at night until you hear music you dig. If you want to get a bite to eat, do what people have been doing for thousands of years, look for some signage and then follow your nose. If you want a recommendation on a place to stay, strike up a conversation and if the person isn’t a fucking IDIOT, ask them where they’ve been and what they might suggest. Or better yet, just get drunk and then see where you wake up the next morning. You might be glad you did. You might wind up with herpes. Either way, however, you will NOT be the dingus who starts his next conversation saying, “I heard that place was awesome on TripAdvisor,” because then, no matter how much you enjoy your truncated, paint-by-numbers vacay, you’re still a damned fool.

JOIN US IN EXPLOITATION!

La Cuadra Magazine and Cerro San Cristóbal, a vegetarian restaurant with stunning views of the Panchoy Valley, are teaming up for a contest. Try your hand at lampooning TripAdvisor reviews by writing one for the restaurant. Submit them to the Facebook page of either business. Make us laugh and you can win free stuff! You might even land yourself a gig with La Cuadra, too. We’re always looking for writers who don’t suck. So don’t suck!

Click here to submit your BadTripAdvisor review, or just type one into the comments section below! Length is not important. Do whatever the fuck you want. Submission open until January 29, 2016. Winners announced February 1, 2016!

Here’s a few examples of what we’re looking for, only funnier. Go hog wild. 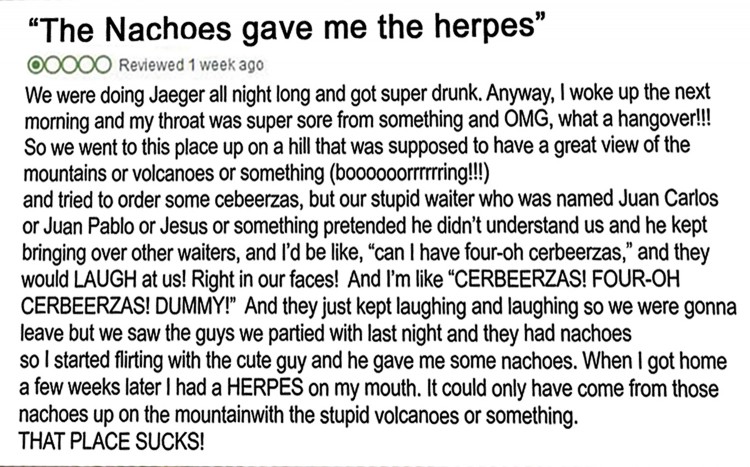 Special Commentary - Bolivia, the Defeat of the Right