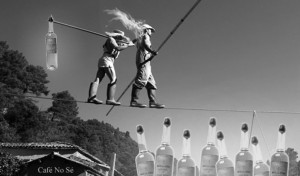 Sorry for the delay in getting around to posting new stories on the website. Your Editor-in-Chief recently had to spend some time in Gotham City in order to wrap his head around the nerve-rackingly premature arrival of two nephews and the crazy-making departure of a dear friend from this mortal coil. We apologize for having been away for a while, but occasionally Ye Olde Cycle of Birth and Death grabs us by the lapels and demands our full and undivided. And it does so to shake the comfort out of our heads and remind us that — as fast as gravity, conception or murder — entropy can send your whole world ass-over-tea-kettle. Whether we acknowledge it or not, we live, half-aware, in an existential two-step on high-wire.

That’s a lesson we seem to learn and forget time after time, but as we’re in “learning mode,” we’d like to share some insight gathered long ago from one of our heroes, Karl Wallenda, the patriarch of the world’s most famous tightrope act, who once said, “Life is on the wire. Everything else is just waiting.” Truer words have never been spoken.

After living down here in Antigua, Guatemala  for the better part of the past decade, we’ve often felt a kinship with Karl and the rest of the Flying Wallendii. At a time in life when the vast majority of our 40-something cohort are enjoying their “prime earning years,” getting respectfully fat and dutifully packing away nuts for the long winter of retirement, we’re still hopping in the back of pickup trucks filled with booze, running a bar full of idealistic, beautiful bastards, publishing an English-language magazine in a Spanish-speaking country, and all the while plotting to take over the 21st Century liquor industry with a magic found in a 500-year-old process that distills, in equal measures, the awareness and the fury of a succulent beauty, aka: the agave.

Writ short: there is absolutely nothing secure about this life. It is terrifyingly “on the damn wire.” There are no 401-K’s offered through No Sé Industries, no La Cuadra pensioner’s fund. We both fully expect to be working long past whatever retirement age is supposed to be for our generation. But what’s easier to forget — and it is something that we still, on occasion, lose sight of — is that the big difference between this life and the ones we’ve left behind up north is that here we’ve dispensed with the illusion of security.

Bad shit happens everyday back up in New York, or London or Amsterdam. If we decided to move back north, we could probably drop a few more drachmae into the deposit column before our first heart attack. But  there still is no purchasing insurance against waking up one day and discovering that you’ve been playing it safe for so long that you’ve lost your nerve to step once more into the breach, dear friend, or to even recognize that this whole living thing is neither a sprint nor a marathon; it’s a dance.

And we’d like to make a deal: if you ever find us forgetting that central truth, kick us in the ass. We promise to do the same for you.

So, to all you beautiful bastards in town, all of you lovelies who are on the road, free-booting, free-lancing, free-loving or free-loading, here’s a glass raised to you and to the fresh new babies getting their wiggle-on in cribs around the world, and it’s also raised to our absent friends — all the more if they lived life on their own terms.

And here’s one special glass raised to Karl Wallenda, who, it should be noted, plummeted to his death in the middle of a performance. We’ve taken from him our lesson, you take your own. But while you consider what it should be, reflect on this: Karl was 73 years old when he died and while it sucks that riggers blew his guy-wires and the wind kicked up to 30 miles an hour when he hit the central span, it is undeniably cool that the old bastard was dancing on the edge of life with a wire between his legs at such an age. And it’s even cooler that the wire wasn’t a catheter and the thin line separating his existence from the abyss was an actual, high-tension carbon fiber, not a the ghostly beep, beep, beep of a EKG. Salud, amigo.

Letters From The Editors - The Passing of Peter Kilbryde

We Finally Made It!
By Michael Tallon
Monday, October 19th, 2009