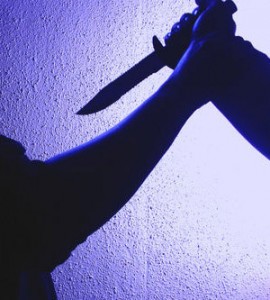 A number of attacks in Antigua on the night of August 18 sparked a CNN iReport post entitled “Bloodbath in Antigua,” a stern warning from the US Embassy, and the spreading of alarming rumors on origins of the violence and its possible connection to narcotraffickers, gang violence, political corruption or a mixture of all three. Two weeks later, concrete information remains scarce, though some of the victims are still in town and have real stories to tell. One of them is P., a American female who requested that her identity remain confidential.

“On August 18, I met a friend for drinks at [a local bar]. We were ready to leave by midnight and called a taxi,” P. recalls. “The taxi never came, so we decided to walk.”

They were headed to a friend’s business to wait for a ride only three blocks away.

“We had walked one block when a black pickup truck with a camper flew past us and suddenly stopped. Two guys jumped out, and I instantly knew they were coming for us,” P. remembers. She was mugged last July, so she had a gut feeling. The first time she was attacked, she fought with the mugger who struck her forcefully on the head before fleeing with her bag.

“This time I took off my bag, flung it to the guy, and turned to run when I felt him stick a knife in the back of my leg.”

P.’s friend was also attacked. “She kept saying, ‘No tengo nada! No tengo nada!’ but the other man cut her arm twice,” P. said. “The guys looked as if they were crazed on drugs.”

The men returned to the pickup and fled. P. felt confused and disoriented. She could not find her way. Her leg was bleeding badly. “I was wearing a long skirt and it was completely drenched; I was dragging it on the ground while trying to walk when a cab stopped. The driver realized what happened and gave us a ride.” Once they arrived at her friend’s business, someone called the paramedics, and the Bomberos Municipales arrived shortly thereafter.

P. and her friend climbed into the ambulance only to find another stabbing victim already inside. His name is Jake Blanco, from Canada. He was stabbed after he stepped out of a bar to smoke a cigarette and was one of ten victims that P. met or heard about. Not all of them appeared in police reports.

The CNN iReport posted on August 21 listed eight victims (six Americans, one Australian, and one Guatemalan). The Bomberos Municipales only recorded four emergencies. The victims were taken to the public hospital, Hermano Pedro, in the early hours of August 19. At 6:00 a.m. the Bomberos Municipales also picked up a Guatemalan woman with a bad cut on her left ear. She was wearing corte and güipil, traditional dress, and had no ID. This information appears on records from the Bomberos Municipales Antigua station, according to paramedic José Juan García.

The Bomberos Voluntarios did not cover any emergencies in Antigua that evening, according to their spokesperson Hugo Galindo. However, the National Civilian Police (PNC) recorded four people attacked with a knife. The PNC’s spokesperson, Donald González, revealed that all four reported being attacked by men traveling in a brown pickup truck and a motorcycle.

The police reported one case in addition to the Bomberos Municipales: a Guatemalan, Francisco Monroy, who suffered minor knife wounds and was found on Alameda Santa Lucía around 1:30 a.m. on August 19, according to Officer Erick Tórtola, deputy chief of the PNC Sacatepéquez precinct.

The director of the state hospital Hermano Pedro, Dr. Miriam López, released records which show that three foreigners and one Guatemalan with stab wounds were admitted in the first hours of Friday, August 19. When considering these numbers, however, it should be noted that P’s friend was not listed on any official reports. Further, Blanco, Monroy and P. all reported that there were more victims.

“I met a couple from New Zealand at the hospital who had been mugged near La Merced by men on a yellow bike around 8:30 p.m.,” P. recalls. “They took their money and credit cards, and slashed the man’s face,” P. makes a cutting gesture, to show that the cut went from the right eyebrow to his jaw’s left side. “I also know of a gay couple who was attacked and went to a private hospital,” added P.

It is possible that the hospital records are incomplete due to some of the victims not being treated promptly, opting for a private clinic or not seeking medical help at all. Still, P. is certain that some who were at the state hospital do not appear in the official records.

Local authorities and paramedics dub the attacks as “very unusual” for Antigua. Renato Melgar, from the Bomberos Voluntarios, says they cover — on average — one stabbing incident per month in Antigua. “Most of the cases are from the villages surrounding Antigua, or from other areas in Sacatepéquez,” says Melgar, who has worked at the Antigua station for ten years. Officer Tórtola agrees. He says that the only stabbing victims in Antigua between January and September 6, this year, are the five cases from August 18. The officer was assigned to Antigua last February.

Dr. López says the hospital treated only two other stabbing victims this year from Antigua. One on August 28, the other on September 5. These numbers strike a contrast with those for the entirety of Sacatepéquez. López revealed that the hospital treated 63 people with knife wounds, and 45 with gunshot wounds between January and August 2011.

The events of August 18 caused great alarm in the community, particularly as reports of an increase in criminal activity could drain an already compromised year for tourism, and a public meeting was called to address the issue. The meeting provided a forum for mutual accusations between the police, municipal and tourism authorities, and the local chamber of commerce. During the meeting a flurry of security measures was proposed, including an increase of police presence on the streets. It remains unclear what measures will be taken.

The fear of business owners who depend on tourism is real and fueled by crime elsewhere in the country. Some hotels in Antigua had large group cancellations after the May 14 massacre of 27 peasants several hundred miles away in Petén.

The PNC still knows little about the assailants who acted on August 18. P. only remembers that they were short and dark-skinned. But there is also no explanation as to how the “Plan Cuadrante” did not prevent the attacks. This plan involves two police officers assigned to patrol each cuadrante (a square with sides of two blocks each) by foot or car.

P. says the attack was quick, and Tórtola explains that “the assault could have happened when the police were two blocks away” However, this explanation would have to fit the other cases, as well. And the attacks took place over a four hour period, between 8:30 p.m. to 12:30 a.m. How this could have happened was not addressed.

Yet, Tórtola complains that the police alone cannot provide security. “It would help to have surveillance cameras and a joint command center with the traffic and tourism police,” he says. “There are smaller towns like Pachalum, Quiché, where the mayor installed cameras, or Mixco, [close to the capital, and much larger], where the municipality works together with the PNC.” In Antigua there are cameras, but they are not functioning, the blame being placed on insufficient funding from the municipality or business owners — some of whom scramble to make ends meet. Still, cooperation between the PNC and the municipality is showing some signs of progress.

“This month we began a combined patrolling program involving the PNC, the Municipal Police [PMT] and the Army,” says Tórtola, as a result of the August attacks. Yet, the PNC doesn’t have an answer for the reluctance some individuals feel towards reporting crime.

This reluctance had some effect on the night of the eighteenth. P. admits that she didn’t feel comfortable talking to the PNC. “I am not sure what my rights are as a US citizen in Guatemala,” she says.

Tórtola wishes more foreigners would trust the police. “The police is not what it used to be; we are different now,” he offers, perhaps alluding to a history of corruption which, while it still exists, does not involve all officers. “I have even given tourists a ride,” he says, genuinely surprised that there is a lack of trust. “Sometimes we get the information two or three hours later by a third party, when it’s too late to catch anyone,” the officer says.

Speaking of ways that the public could be more mindful of its own security, Tórtola mentioned the consumption of alcohol. “If [people are] drinking, and it’s late at night, they become a target,” he said. Further, he noted again the lack of technological sophistication in Antigua. “If we had cameras in key locations, we could monitor most of the town and act faster on suspicious vehicles and situations.” When asked whether the police would stop a pickup truck if spotted speeding at midnight, Tórtola says “yes” without hesitation.

Due to the attacks, which the authorities took pains to point out were highly unusual for Antigua, some foreigners have chosen to leave town. Others, however, have decided to stay. Even after being mugged twice in the last three months, P. is philosophical.  “I learned a lot, but this raises the question of what will happen next time.” As she speaks she is stroking a small bump on the side of her forehead, a scar she bears from the first attack. “This whole thing has made me think of ways to better protect myself. I feel that if I leave [the criminals] win. I don’t want to die, but I don’t want to leave either. I like it here.”

P. is still coming to terms with the attack and its aftermath. In many ways, Antigua is trying to do the same.