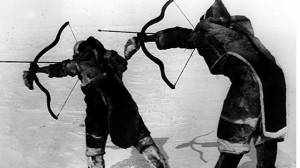 When considering the unexpected consequences in development work around the world, Farley Mowat recorded a cautionary and relevant tale. It is worth describing in detail.

The year is 1947. The place is the Barren Lands of North-Central Canada, a half-day’s flight from the end of any railroad track. Two children, five and ten years old, are found in an igloo next to the frozen body of their mother. Their village is deserted — no other survivors are found. All other members of their remote community died from exposure, starvation or suicide. This tragedy began innocuously, benignly, even beneficially. It began as what some call “development,” but along the way it mutated, spread and destroyed what it aimed to foster.

For centuries the Inuit had inhabited the Barren Lands between Hudson Bay and Great Slave Lake. To say that they thrived may be an overstatement, but in their frozen wilderness they had survived as a people longer than most countries or kingdoms. They lived the nomadic life of hunters, heavily dependent on their wits and the herds of caribou. The Inuit had learned to make oil lamps that burned deer fat, bows from antlers and clothes from deerskin. They took sustenance from caribou meat. They were a model of sustainability, stability and subsistence in one of the most unforgiving corners of the Earth. They had lived much in the same way as had their ancestors who crossed Bering land bridge from Asia some 10,000 years ago.

In the late 1800’s, a fur trading company reached the area. A single outpost, a thousand miles from any road, extended its influence further north. The trading outpost offered bullets and seashells in exchange for the pelts of the Arctic Fox. With those traded goods, the Inuit could buy meat, candles, bowstrings and such. And while trapping Arctic Fox is no walk in the park, it is far less taxing than hunting Caribou. “Progress” dictated a change from hunting with bow and arrow to hunting and trapping with guns and steel. “Progress” brought a new variety to the Inuit diet. “Progress” dictated a change from an economy of subsistence to one of the market.

And then that market took a downward turn due to events several thousand miles removed from the Barren Lands. The fur trading company closed up shop. The proprietor of the outpost went into business for himself — a single man now controlling the entire fur market for over a thousand square miles. He did well for himself, as capitalists with monopolies tend to. Unburdened by competition, he exploited the Inuit and gave little in return for their furs. The Inuit response was to spend more time trapping, and less time hunting and preparing for survival. After several lean years, the trader moved on, leaving his sons to run the outpost. They ran the business more fairly than their father, but “development” and “progress” had taken their toll. The Inuit now made their living almost exclusively by trapping fox, and much of the generational knowledge had been lost. The dependency to a larger world that development had fostered led to the displacement of subsistence skills in favor of market skills.

True, the Inuit tribe knew how to survive day-by-day. However, the resilience of a society, a people, or even a species is shown not in day-to-day life, but in extremis. Those extreme circumstances came in the winter of 1947. The caribou left the region early that winter and the Inuit, preoccupied with their trap lines, had failed to set up adequate stores of food or oil. Then the winter came early and fierce. In an early generation, this band of Inuit (like Inuit all over Northern Canada) would have hunkered down and lived off their stores of caribou. Instead, they had piles of useless fox pelts.

Hunger came, then starvation. Blankets and clothing made of animal hide were boiled for whatever weak porridge they could produce until no fuel remained. Some fled the community for a precarious fate in the frozen tundra. Others remained to face almost certain starvation. Those left behind butchered their dogs and ate them raw — an act of utter desperation in a community dependent upon sled dogs for mobility. The old ones chose their time to go, walking naked into the frozen night, leaving the meager scraps for the younger generation. The ancient custom that the hunter must be fed first was broken so that the children might survive.

News of their plight eventually reached Canadian officials by relayed Morse code. The official reaction was well-intentioned, but misguided. Sacks of dried white beans were shipped (and cached) some 200 miles from those in need. Two hundred miles, or two million miles wouldn’t have mattered. The starving had neither the strength nor the dogs to pull their sleds to the food.

Records from the debt log of the fur trading company indicated that there were fifty families who perished. An outpost of a civilization that had survived for millennia was erased in fifty years.

Mowat featured this story in his book, The People of the Deer. Like all his books, it comes highly recommended, and should serve as a warning to those of us who work in the world of “Economic Development.” The story is a warning to consider the unintended consequences of our actions, and a warning to ask the question at every turn: What is the cost now and what will it be down the road?

I am the director of As Green As It Gets, a development project in Guatemala, and I’m constantly engaged trying to answer the difficult questions surrounding the law of unintended consequences. For example: every year we are offered a donation of 90-day corn seeds that promise to increase food yield. Every year we say “No, thank you.” The donor is aghast. These corn seeds are an improvement — they represent newer technology and more food for the people. Why would anyone say no?

The story of the traders and the Inuit may seem far removed from Guatemala today, but we need to consider, “what might be the unintended consequences?”

Will this “improved” corn blow down when there is a hurricane on the coast? Can the stalks be used to build houses like our unimproved, local variety? Are they strong enough to support the pole beans that will be planted at their base — the beans that provide protein for families and nitrogen for next-year’s corn? Are the proving grounds of Illinois an accurate representation of Guatemala? Does our local corn have a resistance to tropical diseases that weren’t studied by Monsanto? Perhaps the question is better phrased: “How many diseases does our local corn resist that were NOT studied by Monsanto?” Are the seeds fertile or sterile hybrids? If they are sterile, how do we plant next year without depending on another handout? If the seeds are fertile, will Monsanto sue us for collecting and planting them? Most difficult of all: “Am I intelligent and informed enough to even ask the right questions?”

Or perhaps that’s the easiest question, as it’s the only one I can assuredly answer: I’m not.

But that’s only the first level. The problems become more complex and theoretical. What is the value of a corn field compared to a forest? What discount factor do I apply to the future value of the forest when I choose to cut it down and plant corn? Is our goal to maximize food production, to maximize quantity of life, or to maximize quality of life? Do we have the right to decide this question? Which is a greater sin: to allow a child to starve, or to cause future starvation by short-term development under the banner of feeding the children? If I am fully cognizant of population dynamics, and understand that increased food production leads to population growth, which implicitly means a de facto decrease in quality of life for the next generation, can I in good conscience increase food yield? The answers to those questions will yield Masters’ theses in Agronomy, Economics, Philosophy, Ethics, and Mathematics. The danger isn’t in the difficulty of these questions, but in how seldom they are asked.

As Green As It Gets helps Guatemalan farmers plant and sell coffee. As coffee is a cash crop, I’ve seen corn fields turn to coffee fields. Production of food gives way to the production of cash with which to buy food, thus maybe I can answer my theoretical questions. The future value of the corn field is low, and the future value of the coffee field is high. We are minimizing (local) food production to maximize (local) quality of life by putting more food on kitchen tables, though it wasn’t grown here. No one starves. We have secured the moral and economic high ground. If the current market economy will be the future means of distributing wealth, then the farmer will be in an increasingly strengthened position to provide for his family. But do I make the mistake of measuring that strength today, a relatively average point in time? As the Inuit and countless others have learned along the trajectory of their “development,” crisis happens in extremis.

Maybe the better question is this: What happens when coffee production has completely supplanted corn, the local coffee harvest has failed and the world market is glutted?

Are those conditions really so unimaginable?

Only if the following conversation is also beyond imagination: One Inuit hunter turns to another and says: “Why not give up on the caribou? The future’s in fox pelts.”

In the world of “development,” we tend to measure success in seashells and fox pelts, coffee beans and dollar bills. Yet, I can’t shake this nagging feeling that we’re using the wrong units. I don’t know the right answer, because I’m not even sure which of the countless possibilities will grow from the question I didn’t even think to ask.