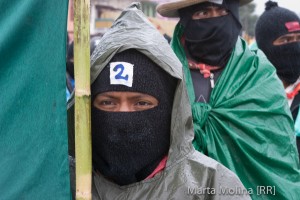 January 1, 2013 was the 19th anniversary of the first public appearance of the EZLN, the Ejército Zapatista de Liberación Nacional, in 1994. From late in the night of December 31, 2012, thousands of families arrived, carrying food, blankets and supplies, in the Zapatista town of Caracol de Oventic to celebrate the day.
Caracol is the Spanish word for the shell of a snail — and the Zapatistas call their population centers caracoles as a way to symbolize the slow, dogged persistence, the self-reliance and the autonomy of their revolution.

In Oventic, located about 40 miles from San Cristóbal de las Casas, in the Mexican state of Chiapas, where the Zapatista Council of Good Governance is located, thousands celebrated the nearly two decades of struggle and resistance during a political / cultural festival that lasted until dawn.

These celebrations came just ten days after the massive mobilizations on December 21 — the day on the Maya calendar that signified the beginning of a new era, a new b’ak’tun.

On the day of the b’ak’tun, at least 50,000 Mayan Zapatistas came out of their autonomous zones to march in five Chiapas cities: Ocosingo, Palenque, Altamirano, Las Margaritas and San Cristóbal de las Casas.

This action was the largest nonviolent mobilization in the history of the Zapatista movement, even larger than a march last May when 45,000 members came out in support of the “Movement for Peace with Justice and Dignity,” led by poet Javier Sicilia, which demands an end to the drug war and it’s associated violence.

The December 21 march demonstrated a level of discipline and coordination not seen since the initial Zapatista uprising on January 1, 1994, in which tens of thousands of armed Zapatistas seized cities across Chiapas, declaring independence from the government of then-president Carlos Salinas de Gortari and rejecting the ratification of the North American Free Trade Agreement.

This past December’s march came less than a month after the inauguration of President Enrique Peña Nieto, whose controversial election heralded massive demonstrations by various social movements, many of whom see the new president as part of a corrupt media-governmental oligarchy.

In this context, the action on December 21 carried a clear message to the Peña Nieto government: It may be 20 years later, but we are still building another world. One where there is actual justice, freedom and democracy for all.

Waiting For A Word

Never before had a Zapatista action generated so much anticipation for a communiqué, the standard way the movement communicates with the outside world. On the night of November 17 — the day that marked 29 years since the founding of the EZLN in 1983 — an advisory appeared in Spanish on the Zapatista webpage: “Coming soon, words from the Clandestine Indigenous Revolutionary Committee.” Within a week, it disappeared.

The message was reposted on December 17, only to disappear that evening. Two days before the action, it reappeared once again. Given the back and forth, observers curiously awaited word from the Zapatistas.

As the media waited, the marchers arrived and gathered in the five Chiapan cities in absolute silence. The entire march was conducted without the sound of a human voice.

Subcomandante Marcos, the spokesperson of the EZLN, was not present. Those who marched covered their faces with ski masks and carried the Zapatista flag: a black rectangle with a red star in the center and the letters EZLN.

Finally, at the close of the day, Marcos released a written message, which took the form of a question, a protest and an expectation:

Did you hear it?

It is the sound of your

It is the sound of

The day that was day, was night.

shall be the day that will be day.

From the Mountains of

For the Clandestine Indigenous Revolutionary Committee — General Command of the EZLN

Online, the communiqué appeared with an audio clip of the song “Like the Cicada,” composed by María Elena Walsh in 1978, during Argentina’s brutal military dictatorship. The lyrics symbolize the struggle for democracy in Argentina and served as a parallel message to Marcos’s concise, poetic words.
So many times they killed me, so many times I died. Regardless here I am, resurrected. I give thanks to disgrace, and to the fisted hand because it killed me so cruelly, and yet I kept singing.

Singing to the sun like a cicada, after a year underground, just like a survivor who returns home from war.

So many times they erased me, so many times I disappeared, to my own burial I went, alone and crying. I made a knot in the handkerchief but I forgot afterwards that it wasn’t the only time, and I kept singing.

So many times they killed you, so many times you’ll be resurrected, so many nights you’ll spend in desperation. At the moment of failure and darkness, someone will rescue you to go on singing.