Clues To The Message 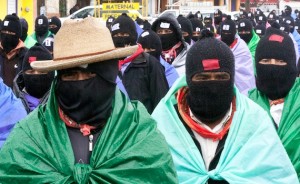 What did the Zapatistas want to express with the question, “Did you hear it?” when their opening salvo was offered in a wordless march? Why the song? Both provide clues that help explain the events that occurred on December 21. That day, the men and women’s silent presence was a reminder and a challenge to those who witnessed it directly and around the world in different media outlets. The challenge is this:

We are doing our work — are you? We are organized — are you?

These Mayan Zapatistas, as the march on December 21, indicated are, like the song describes, reborn every day and continue singing despite efforts to erase and silence them. They continue singing “to the sun, like a cicada after a year underground, just like a survivor returning home from war.”

It is a simple, effective message.

A Lesson In Organization:

Compared to the sometimes-chaotic mobilizations that occurred on the streets of Mexico City on December 1, the day that the President Enrique Peña Nieto was inaugurated, the EZLN’s silent marches stand out as examples of depth and organization. Although it rarely rains in Chiapas during the winter season, December 21 began and ended with an incessant downpour, and the sound of the raindrops became the only noise accompanying the march. Despite the weather, in the city of San Cristóbal de las Casas alone, at least 20,000 Zapatistas marched that morning — disciplined and orderly — from the town of San Juan Chamula to the plaza at the center of the city.

Around 7:30 in the morning, trucks loaded with Zapatistas arrived in San Juan Chamula. With their faces covered, they carried a piece of white cloth with a number sewn into the fabric and wore red bandanas tied around their necks. The numbers, from one to twenty-nine, one for each of the Zapatista autonomous enclaves, showed both the diversity and the solidarity of the Maya across Chiapas and Southern Mexico. Men, women, and children arrived, together. Some women wore traditional indigenous outfits, whose patterns along the borders of the cloth identified their native communities.

“How many are you?” one observer asked an organizer who was carrying a radio transceiver.

“I don’t know, but more are coming,” he replied.

“What time did you all head out?” the observer pressed.

Arriving in San Cristóbal de las Casas, the Zapatistas began walking toward the center of the city in columns of four. Like the snail with whom the they identify, they moved slowly — awaiting other contingents that continued to pour into the city.

A few Zapatistas walked alongside the columns, acting as marshals in case anyone stepped out of line. They charted a straight path down the streets until they broke the columns to create the pattern of a snail shell as they walked. Again, all without a word of command.

By noon, a massive group of Zapatistas had reached Diego de Mazariegos Street, a main avenue in downtown San Cristóbal. There were so many people marching that observers could not see the horizon beyond them. Thousands of women and men, grandmothers and grandfathers, teenagers, children and babies flooded into the plaza. They formed a “U” shape, quickly falling into position like a tidal wave of black dots or the rows of worker ants whose route is unchangeable.

The sight was powerful: thousands cloaked in black ski masks who had come to show the world that, if we want another world to flourish, the rest of us, too, must do our work. In perfect coordination, the Zapatistas climbed onto a wooden platform that had been installed during the action and, still in complete silence, raised their fists.

Without words, the symbolism was nevertheless clear. The Zapatistas were saying without saying: We are here, and we are fighting.

They were continuing the struggle, despite the end of calendrical cycles — whether that is a six-year presidential term or a Mayan b’ak’tun.

After descending from the platform in the central plaza, the Zapatistas re-grouped behind the city government offices. Nearby was the cathedral where, in 1994, Subcomandante Marcos met with Manuel Camacho Solís, a government official sent by former President Salinas de Gortari, after armed Zapatistas seized the city, freed the prisoners inside the jail and set fire to a handful of police precincts. In perfect order, the Zapatistas once again formed columns and began marching to the outskirts of the city, where they departed hours later in hundreds of trucks.

In the other cities where they marched — Palenque, Ocosingo, Las Margaritas and Altamirano — they arrived and departed in the same fashion. By the end of the day when Marcos issued the communiqué, all had returned to their communities to continue building the solutions to their 13 demands: shelter, land, work, food, health, education, information, culture, independence, democracy, justice, liberty and peace. They returned to their communities, in short, to continue building autonomy.

Many in the mainstream media later reported that the march represented the Zapatista “resurgence.” In reality, the public appearance was designed to remind the world that the movement had never gone away.

The children who marched on December 21 had been born in Zapatista communities; they are already living in this other world as the dominant one continues to stagger forward. The dignified silence of the Zapatistas resounded as they spoke with their feet and charted a path that showed onlookers the distance that is left to travel.

For the rest of the world — struck by their presence and the vigilance of the “Enough!” that they have been proclaiming since 1994 — December 21 was a lesson in dignity, organization, discipline. And hope.

Marta Molina is an independent journalist, originally from Barcelona, Spain. She has spent the past several years reporting on peace movements in the Middle East and Latin America. We welcome her to the La Cuadra fold and look forward to featuring her writing in the coming issues of this magazine. A version of this story first appeared on the website, www.wagingnonviolence.org