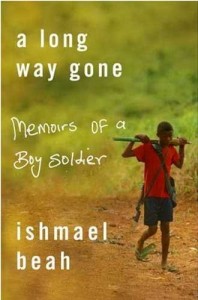 My High School Friends have begun to suspect I haven’t told them the full story of my life.

“Why did you leave Sierra Leone?”

“Because there is a war.”

“Did you witness some of the fighting?”

“Everyone in the country did.”

“You mean you saw people running around with guns and shooting each other?”

I smile a little.

“You should tell us about it sometime.”

These are the opening words to Ishmael Beah’s powerful memoir, A Long Way Gone.

Reading Beah’s story provides a clear view from the sad bridge spanning the chasm between the wealth of the West and the devastation caused by resource wars waged in much of the “developing” world.

Though Beah does not dwell at length on the causes of the war, they are important for contextualizing his personal odyssey.  In 1991, while Sierra Leone was descending into the blood cauldron, Ishmael Beah and his brother were rehearsing Rap songs they collected on old cassette tapes.  While the aspirational dreams of life in America and the West were being formed in his generation, a conflict was boiling over between the Revolutionary United Front and the Sierra Leone military.

As in all wars, each side claimed ideological purity and righteousness while demonizing the other.  As in most wars, the real motivations were access to resources, the money those resources could secure, the guns that money could buy and the power conferred upon generals when those guns were put into the hands of ruthless soldiers.

The resources in Sierra Leone were diamonds and the soldiers were often children under 14 years old.

Ishmael Beah was one of those boys.  At 12 years old, with his older brother and a friend, he left on a few days trip to participate in a talent show in a neighboring town.  Over the course of those two days, the war which had been raging in other parts of Sierra Leone would finally find his home.  The rebels came.  The townspeople were murdered or scattered.  Everything was burned.

For the next two years, Ishmael and a few other boys he met along the way would dodge the army and the RUF, but also had to be careful of previously peaceful Sierra Leonians who had come to fear all children they did not know.  One of the most moving chapters happens when Ishmael finds himself with another group of boys traveling by the coast of the Atlantic Ocean.  They are set upon by the men of a local village who, believing them to be child soldiers, threaten to kill them, then steal their shoes and set them to walking on the roasting Equatorial sand.  The skin bakes and peels off their soles and the sense of loss and hopelessness is ineffable.

In time, Ishmael finds himself living in a community protected by the Army.  The surrounding land is thick with rebels.  The army’s need for soldiers to wield their guns grows.  Ishmael and his friends, including two boys too small to actually hold their rifles, are absorbed into the army – and they become monsters.

Through a mix of drugs (the boy soldiers were encouraged to constantly snort a mixture of cocaine and gun powder called “brown-brown), and a ritual desensitization to violence and human dignity, they learn to do terrible things.

Beah doesn’t revel in retelling war stories, but he doesn’t shun them either.  At one point, he tells, clearly and even heartedly, how during a contest he won a promotion by slicing through a man’s windpipe with his bayonet faster than the other boys.

After several years of violence, drugs and barbarity Ishmael is taken from his unit by UNICEF, in cooperation with some commanders of both the Sierra Leone Army and the RUF.  He and his comrades are placed in a rehabilitation camp with other child soldiers from both sides of the war.

They are not happy about this change in their lives – and their initial disdain for the social workers, doctors and nurses is acidic.  While this is uncomfortable for the reader, who wants these children to begin to behave again as children, the lack of initial planning by the clinicians is stunning.

During the first day of their rehabilitation a fight breaks out between former RUF soldiers and former Army soldiers and Ishmael tosses a grenade he has smuggled into the compound into the midst of the fight.  Fortunately it didn’t find its mark.  Unfortunately, several guns were stolen from the MPs guarding the boys and six more children were killed.

The story of the rehabilitation of the children is nearly as harrowing as the stories of their flight from, and participation in, the war itself.  The boys suffer withdrawal from their years of heavy drug use and must process their own participation in such brutality.  Their nightmares are very real.

The central key to the boys’ rehabilitation is the constant assurance that “none of this was their fault.”  It is a line that at first infuriates Ishmael – as it is repeated to him daily for months.  But ultimately, by accepting his own victimization by larger forces, he learns to forgive himself for what he has done.

For Ishmael, the journey – while terrible – ends well.  His eloquence and innate grace – somehow surviving the years of child soldiering – lead him to be selected as a spokesperson for child soldiers at a conference hosted by the United Nations in New York City.  Yet, afterwards, he must return to Sierra Leone, and the war finds him again.

In the final passage of his African life, Ishmael smuggles himself across the border into Guinea to escape the war.  With the assistance of a woman he met while at the United Nations conference he makes his way to New York and ultimately graduates from high school and Oberlin College – where professors and mentors encourage him to write this memoir.

If Ishmael’s story were not redemptive it would be too terrible to read and its own improbability reminds the reader, even one without a diamond ring on his finger, that his survival is by far the exception and not the rule.  And that none of this was his fault.

A Letter of Warning to a Young Patriot, By Naomi Wolf
By Michael Tallon
Sunday, January 13th, 2008

Latin America, The United States and the Rise of the New Imperialism
By Michael Tallon
Sunday, October 14th, 2007