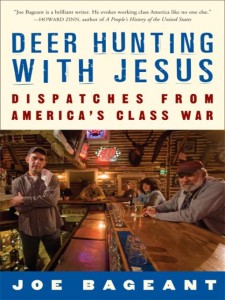 The audience Joe’s trying to reach with his book are the kind of liberal, progressive, do-gooders who would get visibly nervous having to share a room with Earl, or grab a burger and a beer at the Royal Lunch, Joe’s local bar in Winchester. And, if those “libruls” had to talk to Earl, or found themselves stuck at that particular drinking establishment, they’d probably spit out some dry lines about the “great human tragedy” of “our current economy” before trying to get the hell out of Dodge before the mark of poor, working class America was able to stain their organically grown, fair-trade, hemp-woven jackets with engine grease.

And those people are out there. Hell, I grew up with them, and if it weren’t for the Earls and Joes and Bos and Totos of my life, I might still be one of them. They are the folks who just can’t understand how “those damn rednecks keep voting against their own economic interests.” They are those who can’t  understand the attraction of Country Music or NASCAR, or guns and who, quite honestly, look down upon a good 40% of the American public with disrespect while sipping Green Tea and trying to figure out how to massage the Democrat’s message to attract their votes, though certainly not their company around the dinner table.

Mind you, Joe Bageant shares the belief that the poor, working-class whites with whom he grew up ARE voting against their own economic interests. He understands, but certainly doesn’t share, their anti-intellectualism. He believes, to use his own metaphor, that most Americans – the upper-middle class Chardonnay sipper and the poor white trash, the Hummer driving consultant and the gangbanger on the street – all live in an “American Hologram,” manufactured by corporate interests and spoon fed to us through mass media. His gift, developed over a life-time of experimental drug use, immersion in the beat culture of the 1950s and the Hippie movement of the 1960s, and a life long love affair with language and the importance of the written word, is that he can see the hologram for what it is: an unsustainable construct that encourages greed, disassociation from community, and constantly reinforced class distinctions to our detriment, and likely, our destruction.

In his own way, at the Royal Lunch and with his family, he engages his roots and challenges “his people” to see beyond the edges of the Hologram – and with his writing he engages those of us who share his core political and social beliefs, but not his cultural history.

In Deer Hunting With Jesus, Joe takes the limp lefty by the wrist and walks him through a few hundred electrifying pages that expound on the nature and origin of the heavy-handed, but never mentioned, American class system. He explains just why all those poor, proud rednecks are, almost to a one, Republicans. He explored, years before the sub-prime housing meltdown that cascaded the world economy into collapse, the ways that his family and neighbors got sucked into taking the riskiest mortgages on the least valuable of real estate and what it would mean for the rest of us and our 401 K’s. Those dozen pages or so are worth the price of the book on their own, and they put the lie to the idea that “no one could have seen” the hell that was coming down the pike in time to avert the disaster.

Hell, a half-drunk redneck saw it from Hopkins Village!

Bageant goes further in his analysis to explain that those trailer-dwellers with their variable rate mortgages, have been fucked with and fooled for generations by their “social betters.” In Deer Hunting With Jesus, the author drives into a readable and thought provoking anthropology of The American Redneck, tracing their history back to their Scots-Irish roots: The Borderers.

Hundreds of years ago, the Borderers lived on the frontier between England and Scotland. There they fought for a meager living by stealing and holding land for their families and clans against others who wanted to take it from them. These rough-hewn, God-fearing folk were then migrated, sometimes at the end of a pitchfork, to Ireland to fight and scrap for land against the Catholics and Republicans of that tragic island. Their descendants, still on the Old Sod, made up the Ulster militias that only this past month finally agreed to lay down their arms and decommission their extra-legal, right wing militias.

NGO - NGO Review – As Green as it Gets