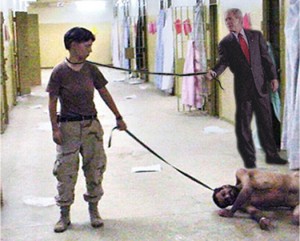 Deer Hunting With Jesus carries the greatest impact when Bageant writes about individuals – be they his brother Mike, the Evangelical preacher who casts demons out of teenagers who’ve taken to sexing and drugging rather than praying and preaching The Word, or his friend, Pootie, who wears a shirt that reads, “One Million Battered Women in this Country, and I’ve Been Eating Mine Plain,” or Dottie, the inhaler addicted, bottled oxygen dependant karaoke singer who belts out Coal Miner’s Daughter like she was Loretta Lynn herself, even after she lost her savings, but not her dignity, to the forced poverty of Medicare and ended up at one of those low-rent nursing homes where his people spend the last few years of their hard-earned lives.

But the one person of whom he writes most provocatively is one he never knew – though you get the sense that if he didn’t know her personally, he sure-as-hell knew her story. Lynddie England, that tossed out bit of White Trash who bore the brunt of America’s discovered love affair with torture in Abu Ghraib featured prominently, and enigmatically, in Bageant’s book.

Here’s Joe speaking of Lynddie and her experiences:

“Most of the young soldiers were fleeing economically depressed places, or dead-end jobs like the one Lynddie had at the chicken-processing plant… These so-called volunteers are part of the nation’s de facto draft – economic conscription. Money is always the best whip to use on the laboring classes. Thirteen hundred a month, a signing bonus, and free room and board sure beats the hell out of yanking guts through a chicken’s ass.

…I suspect that Lynddie knew her lot in life from the start; she wore combat boots and camo outfits to high school. She swore she loved it. If you are doomed to eat shit, you may as well bring your own fork. Such grim unacknowledged resignation has long been a survival skill of borderer people, an understanding that your life runs on a darker parallel track with success.”

Those excerpted paragraphs carry both Bageant’s unique voice and  much of his general thesis – that the much maligned redneck, accustomed to jumping into a fight, who is fiercely – if ignorantly – patriotic, who is buffeted by economic forces they can neither control nor fully comprehend, end up as the shock troops of empire whether they are put to the fight on the Rubbermaid loading dock, the frontier with the Indians, against the blacks at the school desegregation line, or way the hell over there in Iraq or Afghanistan.

And he further makes clear that these are also the people who get the scapegoated, butt end of the deal when things go awry. They are the ones who end up ever deeper in debt, working longer hours for less pay, and who are chosen to sit time in a Leavenworth stir or a foreclosed trailer in place of the true criminals – the higher-ups in Washington and Wall Street – when the gig is up.

At the end of the day, what Deer Hunting With Jesus reminds us lily-livered-lefties is that if we ever want to find common ground with these people, we first have to see them as fully human brothers and sisters. And if we just look at the course manners and their crimes, and in the case of young Lynddie England, truly horrible crimes, and abandon them to the “uncivilized pile” to sooth our consciences, then we’re no better than bigots ourselves.

If we do that, then we will never find our way into a conversation at the Royal Lunch, and we wouldn’t deserve the beer that Earl just bought for us, nor understand the stories he, nor Joe, have to tell.

We encourage you to check out Joe’s website at www.joebageant.com. And if there are any lovely ladies traveling around southern Mexico, we strongly suggest you drop in to visit Earl at www.mistermexico.net.