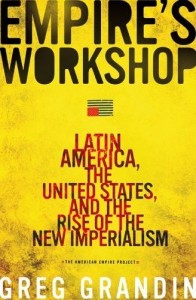 Much has been made of the radical right’s “hijacking of the Republican Party” since the election of George W. Bush in 2000, but according to Professor Greg Grandin of New York University, the hijackers have been plotting the take over the plane for 25 years.

Like many of us in the age of “Everything Changed on 9/11” and “Let’s Roll,” Professor Grandin has been striving to understand the origins of the self-defeating foreign policy of the Bush administration.  He’s had more success than most.  As he notes in the introduction of his latest work, Empire’s Workshop:

…in their search for historical precedents for our current imperial moment, intellectuals invoke postwar reconstructions of Germany and Japan, ancient Rome and nineteenth-century Britain but consistently ignore the one place where the United States has projected its influence for more than two centuries.

In Empire’s Workshop, Professor Grandin takes the reader on a revelatory tour of the changing relations between Washington and its southern neighbors since the 1780s, but he focuses the bulk of his book on the aggressive neo-imperialism that manifested itself in Latin America through the foreign policy of the Reagan administration and how it has served as the model for what might generously be called the “global vision” of George W. Bush.

It is a cautionary tale.

According to Mr. Grandin the hijackers, come from very different backgrounds, but coalesced within the Republican Party in the wake of the Vietnam War.  In the mid 1970s and early 1980s Evangelical Christians, militant Neo-Conservatives and Free Market Fundamentalists perceived America’s global power to be evaporating and they vowed not to let this happen.

Each group shared a unifying belief in the providential mission of the United States.  Each faction viewed the U.S. retreat from an aggressive foreign policy to be a dangerous breaking of faith with their national history.  To these individuals, the United States was destined to lead – by force or example – the nations of the world towards the light of democracy and while direct confrontation with the Soviet Union was fraught with difficulties, Grandin notes that in Latin America in the 1980s, “…all bets were off.”

To quote Grandin at length:

Once in office, Reagan came down hard on Central America, in effect letting his administration’s most committed militarists set and execute policy.  In El Salvador, over the course of a decade, they provided more than a million dollars a day to fund a lethal counterinsurgency campaign.  In Nicaragua, they patronized the Contras, a brutal insurgency led by discredited remnants of the deposed dictator’s National Guard designed to roll back the Sandinista revolution… All told, U.S. allies in Central America during Reagan’s two terms killed over 300,000 people, tortured hundreds of thousands, and drove millions into exile.

But Empire’s Workshop is not just a history of American foreign policy in Latin America; it is also explanation of our present and a warning for our future.  The same coalition of neo-cons, evangelicals and market fundamentalists that elected Ronald Reagan elected George W. Bush – and in the wake of September 11, 2001, all bets are off world wide.

If  it is remarkable that the men who designed, supported and implemented the foreign policy of the United States towards Latin America in the 1980s were given the portfolio for the rest of the world under George W. Bush in the early 21st Century, then it is reprehensible that they have learned so little.

Consider the following.  This is a short passage  wherein Grandin speaks with a coroner’s concision about one massacre committed by U.S. trained death squads in El Salvador in 1981.

In December 1981, the American-trained Atlactl Battalion began its systematic execution of over 750 civilians in the Salvadoran village of El Mozote, including hundreds of children under the age of twelve.  The soldiers were thorough and left only one survivor.  At first they stabbed and decapitated their victims, but they turned to machine guns when the hacking grew too tiresome.

With the United States failing to defeat the rebels on its own, the Pentagon came to debate the “Salvador Option,” that is, the use of local paramilitary forces, otherwise know as death squads, to do the kind of dirty work that it was either unwilling or unable to do.

Lest anyone misjudge the sincerity with which the United States under President Bush has considered the Salvador Option, the U.S. military recalled Col. James Steele to service to help train paramilitary units in Iraq.  Col. Steele led the Special Forces mission to El Salvador in the 1980s and as such, was the man who provided guidance, support and training to the Atlactl Battalion.