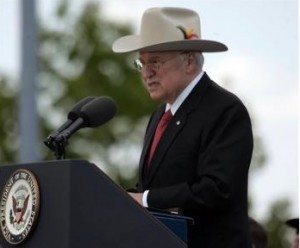 Throughout the book, Grandin’s advises that we not only question the truth of the Bush Administration’s words, but knowing their origins and the motivations of their practitioners, we doubt their wisdom.

Ultimately, it is this inability to reflect and learn – this curse of ideology found in the core supporters of both Reagan and George W. Bush – that is Grandin’s most profound warning to his readers.  Their fundamentalist neo-conservatism rejects the blowback that inevitably occurs when one brings violence to a neighbor and justifies into irrelevance the deaths of, literally at this point, millions of human souls.  And, tragically, it is all to the ultimate detriment of American and global security.

The tripartite ideological beast that placed both Reagan and Bush into power, Grandin exhaustively illustrates, has shown an incapacity to learn beyond its intellectual, historical and religious parochialisms.  During the dirty wars of the 1980s these men, and the movements they represented, were as convinced of their righteousness in Central America as they are now in Iraq.  It is up to us, with the help of scholars like Grandin, to sit them down and patiently explain just where they went so tragically wrong.

The past cannot be changed, nor with a wave of the hand can the present be made secure.  But the future is still salvageable.

Empire’s Workshop provides the reader, the citizen, with the historical insight to see past the rhetoric of dangerous ideologues.  As such, it helps to provide the raw intellectual material from which we can devise a plan, storm the cockpit, and take back the plane.

Greg Grandin teaches Latin American History at New York University and is the author of two previous books, The Last Colonial Massacre and The Blood of Guatemala.  Grandin has served on the United Nations Truth Commission investigating the Guatemalan Civil War.  He has written for the New York Times, Harper’s and the Nation.  He lives in Brooklyn, NY.

Getting Disabled Guatemalans Back in the Game
By Laura Shearer
Monday, October 19th, 2009

The Land Where Discipline Goes to Die
By Rocco Dooley, Jr.
Wednesday, May 28th, 2008