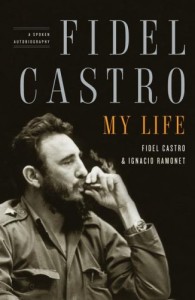 A man who inspires both loathing and admiration, Fidel is one of the twentieth century’s most influential leaders and, until last year’s illness, the world’s longest serving head of state. Starting with President Eisenhower’s CIA proposed plan to “topple Castro in one year,” Castro has remained a burr under the saddle for no fewer than ten U.S. administrations. This unrepentant revolutionary has withstood pressures both subtle (Radio Marti) and not so subtle (assassination and invasion attempts) from the administrations of Eisenhower, Kennedy, Johnson, Nixon, Ford, Carter, Reagan, Bush, Clinton and Bush.

This recent release is the result of 100 hours of interviews with Fidel Castro from January 2003 to December 2005.  It is a very literate translation by Andrew Hurley from the two previously released Spanish versions. Those readers who are looking for a balanced and critical perspective on Fidel’s life and influence will have to look elsewhere. This book is Fidel telling his own personal and political story, all in his own words. He has chosen the very sympathetic interviewer, Ignacio Ramonet to stake out his own version of the history of the Cuban revolution and his role in it.

By prior agreement, Castro was able to re-read and alter his responses to Ramonet’s questions and add his own historical references, aided by his personal historian, Pedro Alvarez Tabio. The final version of this book was totally revised and amended by Castro in November 2006, some four months after his crippling health attack, the details of which are still a state secret. Castro emerges as a man with a profound sense of his own position in history and this book is his final legacy.

Due to the process that was used to create this book, it is not an easy read. As you read yet another of his tirades against capitalism, you can imagine what it must be like to endure one of his brutally long speeches. He still holds the record at the UN for his 4 ½ hour long speech in 1960. Even the sympathetic Ramonet rises from his timidity to question Castro on some of his speeches “which are, let’s say, less brilliant” than others. Ramonet does provide a thread that is useful in tying together his subject’s frequent digressions, but his sycophantic statements such as, “Fidel, you’re a man who’s admired and beloved not just in Cuba, but in other countries as well…..” leaves the reader craving for a more critical line of inquiry.

But there is some very entertaining language used by Fidel in describing the “evil empire” which will delight those readers who love to see the capitalist west poked in the eye.  George Bush Junior is referred to as “shrub” and Governor Jeff is “the chubby little brother in Florida.” Tony Blair is a “fire-breathing militarist.” Cuban dissidents are “traitors and mercenaries;” while five Cubans being held in the US on espionage charges are “heroes of the Revolution.” When in 2004 President Bush accused Castro of turning Cuba into a “main port of sexual tourism,” Castro responded by linking his protagonist’s fundamentalism to alcohol.

The facts of Fidel’s life and the revolution he propagated are so interesting from an historical perspective that it is worth being reminded of them. His life, in many ways, encapsulates a living history of the post war geopolitical struggle. Seizing power in 1959, the same day that General Charles de Gaulle is inaugurated in France, Castro tours the U.S., addresses a crowd of 35,000 in Central Park, and meets with Vice-President Richard Nixon. In 1960, he returns to New York to address the UN and stays in Harlem where he receives Egyptian President Nasser, Indian Prime Minister Nehru, Malcolm X and Soviet Premier Nikita Khrushchev.  Forty years will pass before Castro will meet another U.S. president, a chance encounter with Bill Clinton at the UN’s Millennium Summit.

Fidel’s revolution has not only outlasted nine U.S. administrations, but also the Soviet Union, its sponsor for twenty years before collapsing in 1991. The book is sprinkled with references to Castro’s contemporaries, insurgents such as Nelson Mandela, Ho Chi Mihn and, of course, Che Guevara. This revolutionary tradition is linked by Castro to the present as he declares Cuban kinship with the Bolivarian revolution of Venezuelan President Hugo Chavez, Bolivia’s Evo Morales and other present day Latin American leaders. Castro displays an impressive grasp of 20th Century revolutionary history, all of which is, of course, presented in a way that puts him and his beloved “companeros” in the very best light. Reports of personal conflict with Che are dismissed out of hand as “the enemy planting suspicion.”

It may seem hard to believe now, but Castro sent some 55,000 Cuban soldiers to fight in Angola in 1975 at the height of the Cold War. According to Fidel, Cuba sent the military help without even consulting the Soviets, and all of the soldiers were volunteers in the cause of justice and revolutionary brotherhood. The eventual Angolan victory is described as a glorious victory that brought independence not only for Angola, but also for Zimbabwe and Namibia and ultimately led to the toppling of the hated apartheid regime in South Africa.

Castro masterfully overcomes serious gaps in logic as he resolutely defends the Cuban revolution. This is most evident when he is asked to defend the series of emigration crises in Cuba that has seen hundreds of thousands flee Cuba. These emigrants are described as having “no sense of patriotism” that leave just because “they want cars and other things that are associated with a bourgeois lifestyle.”

So this book, in many ways, is Castro’s final legacy as he lives out the winter years of his life, gradually relinquishing his health and his grip on power. He gives us his personal dream in these revealing words, “I die tomorrow and my influence may even increase. I may be carried around like El Cid – even after he was dead his men carried him around on his horse, winning battles.”

How Conservatives Abandoned the Free Market and why Liberals Should, Too. – Free Press, 2008
By James R. Tallon, Jr.
Tuesday, November 18th, 2008

A Letter of Warning to a Young Patriot, By Naomi Wolf
By Michael Tallon
Sunday, January 13th, 2008