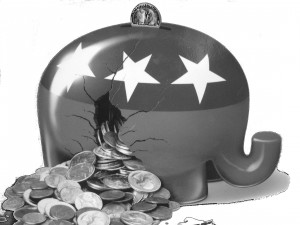 The Internet “gives us instant free communication at the price of universal surveillance.”

This parenthetical observation has nothing to do with the central themes of James K. Galbraith’s new book, “The Predator State.” It’s included in a brief description of technologies which moved from military roots to broader societal application. It marks the moment, however, when a casual summer read, poolside at a hotel in Antigua, gave way to an agreement by a recovering politician and policy wonk with minimal graduate training in the discipline to review a work on economic policy by a distinguished professor for his son’s magazine. Good thing, too. This book is worth reading.

With analytic clarity, grace, and wit – the Internet line is just one of myriad examples – James K. Galbraith takes the reader on an almost thirty year flight, from the Reagan Revolution to the hopes and fears of current discourse. The altitude is low enough to describe details on the ground but sufficient in height to discern patterns of governmental and economic policy. The result is a refreshing antidote, perhaps for the economist, but surely for the concerned general reader, to the superficial exchange of talking points and cable commentary which passes for a national policy debate. His goal, he says, is to “free up the Liberal mind.”

Galbraith introduces us to the concept of predation, “the systematic abuse of public institutions for private profit or, equivalently, the systematic undermining of public protections for the benefit of private clients.”  At its core, however, the analysis moves beyond yet another critique of the Bush administration to its real target, the inability of Democratic leaders to articulate a governing alternative. He challenges the reader to envision an approach which is more than not-Bush.

Galbraith begins with the theoretical economic tenets of the Reagan Revolution: tight money, low taxes, balanced budgets, deregulation, free trade and others.  With civility, he cites the roots of these ideas in the academia of the 1970s, and while affirming his rejection of both the content and logic of the theories, he grants a seriousness of belief to the revolutionaries.

A series of chapters, thought provoking to the layman, no doubt the grist for a bodily assault in the Academy, examines the rejection and abandonment of the conservative policies, at least with respect to their stated economic objectives, through the years of Reagan and beyond. The lasting impacts of the Reagan revolutionaries were not, he argues, in the basics of economic policy. Rather, Galbraith offers a fresh concept: Reagan and his supporters changed the language of debate.

The lasting effect of the “Reagan Revolution” was to bring reverence to the concept of markets, a word which Galbraith suggests has risen to the status of a secular religion in American political discourse. Observe the genuflections as the word “Market” is spoken. To the economic assertions about the market, Reagan conservatives appended the political concept of freedom. “Economic freedom,” in Galbraith’s words: “the freedom to shop,” took center stage in political discourse.

Far from defending or ensuring a role for coherent governmental action, Liberals have been overtaken by the language of “making markets work.”  The result has been to define and limit the discourse between Liberals and Conservatives nearly three decades later. What is government’s role and who speaks for it?

While the words of the current Bush administration echo the Reagan vision, they are – in Galbraith’s view – of a wholly different character.  The rhetoric is still of limited government, but the reality, simply stated, is why challenge the role of government when it is easier to acquire control directly? Galbraith cites the litany of oft-heard criticisms of the Bush years, but he places the behavior of the administration within the concept of a “corporate republic.”

Their policies are wholly consistent with a private takeover of the state. Help our “investors” make money on government’s lines of business. Keep regulation out of our way. Deliver our governing message with efficiency and effect. The rhetoric is conservative, but the reality is quite the contrary.  It is an aggressive governmental effort in support of private gain.

This is The Predator State.

To Galbraith, the ideas and policies of Reagan have been abandoned in practice. In his view, they were wrong anyway. But they have taken on cosmic life as a secular belief system. The political descendents of Reagan use the rhetoric to run a private interest government, and the Liberals, trapped in the language of markets, seem able only to stammer, “we’re not them.”

While Galbraith admits that he could write more – perhaps he will – about the road ahead, he reminds us that our national success from the Great Depression forward grew not from a “free market economy” but from our unique American mix of public and private action. He concludes with thoughtful examination of the potential for public planning and standard setting in advancing a new approach to climate change and infrastructure development.

Lest The Predator State be viewed as a one-sided ideological attack, Galbraith takes aim at commonly heard criticisms of trade policy and the loss of jobs by America’s middle class. He reminds us that the quality of jobs “at risk” in the trade debate were not created as a result of “free markets” but by unions, laws, regulations and standards, imposed here at home. The problem is a conservative attack on those mechanisms, not in the concept of trade. The answer is how we respond in our domestic policies. “The trade deficit overall has practically nothing to do with trade agreements.”

I learned a valuable lesson from Professor Galbraith. As a member of his target audience, a Liberal caught in the language of markets, he offers a simple challenge. Think about how things really work. My work is in health care policy. His modest treatment of this area covers the well stated criticisms of high cost, uneven quality, and our lack of a universal payment system. It’s also a field awash in talk about markets, about the freedom to choose. How does this market thing really work? Can you even buy a unit of health care if you wanted to? Are you purchasing medical care or are you purchasing insurance, an entirely different product? In other words: think about how the terms of discourse alter and mask our real choices.

Galbraith acknowledges that the book, at least in part, was suggested during his last visit with his father, John Kenneth Galbraith, at a Cambridge hospital in 2006.

The Internet moment cited above occurred in the presence of my son and, thus, the agreement to write the review. If 2008 presents an opportunity for meaningful discussion among generations, Galbraith is a good traveling companion.

Jim Tallon is President of the United Hospital Fund, a health care policy think tank and philanthropy. He served as Majority Leader of the New York State Assembly. He lives and works in New York City.

Latin America, The United States and the Rise of the New Imperialism
By Michael Tallon
Sunday, October 14th, 2007