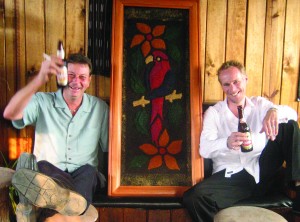 I have certain friends who, when they say, “Hey, man I’ve got a really great idea,” my mind turns to memories of wayyyy too much booze, blurry images of table dancers, the police, a killer hangover, three rounds of increasingly stronger antibiotics and finally a lawyer.

Now, I’m not saying (on the strict counsel of that same lawyer) that Tom Merpaw and Cris Noordzij are guys like this, but when they called me aside to tell me their latest great idea, I must admit to breaking out in a  cold sweat.

So, imagine my surprise when the idea turned out not only to be sane, but one of the best ideas I’d heard in all my years here in Antigua.

Tom and Cris, after years of research, planning and experimenting with materials have discovered a way to bring some of the unique beauty of Guatemala to the rest of the world.

Every year, in the weeks before Semana Santa, Antigua’s streets are covered in alfombras.  Alfombras, or  “carpets,” are made of colored sawdust spread in intricate patterns on the streets.  They are constructed by families and neighborhoods to commemorate the passage of Jesus into Jerusalem on Palm Sunday.  The patterns each family or barrio uses are often hundreds of years old, having been passed down from generation to generation.

Originally, the pre-Christian Maya constructed alfombras to welcome good spirits and then destroying them to dispel evil.  Their themes were generally taken from nature – birds, butterflies, fish and Mayan symbology.  Upon the introduction of Catholicism to Guatemala, the tradition continued, but the images changed to represent the traditional iconography of The Church.  Today, alfombras are a marriage of those two traditions.

What Tom and Cris have done is to take those traditional designs and make them both permanent and transportable by developing a technique for adhering the dyed sawdust to wooden frame.  Their works can then be displayed as wall hangings or worked into handcrafted tables.

Tom and Cris will be displaying their alfombras throughout March in Café Mio, Café Sky and Café No Sé on 1st Avenue South in Antigua.  Open houses with FREE WINE will be held at those locations between 6 and 8 PM each Tuesday in March (the 4th, 11th, 18th and 25th).  These alfombras are available for purchase and are the perfect keepsake of Guatemalan memories.

And that is one hell of an idea!

The Land Where Discipline Goes to Die
By Rocco Dooley, Jr.
Wednesday, May 28th, 2008