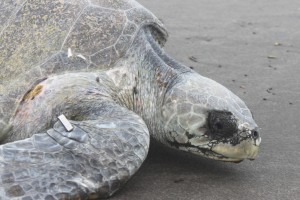 Guatemala attracts a multitude of tourists each year, drawn by its rich culture and traditions, varied landscapes and tropical flora and fauna. Few visitors, however, realise that its Pacific coastline is an important nesting site for the vulnerable olive ridley sea turtle, (Lepidocheyls olivacea) and for a small number of the last remaining critically endangered leatherbacks (Dermocheyls coriacea). Nor is it common knowledge that Guatemala’s existing sea turtle conservation strategy is regarded by most world renowned turtle specialists and aficionados as an embarrassing ‘black spot’ on the global sea turtle map. Unlike Costa Rica and Mexico, both ranked in the top four countries in the world for their sea turtle conservation efforts, Guatemala finds itself trailing far behind its more eco-conscious neighbours.

There are seven species of sea turtle in the world, (five of which can be found in Guatemala’s Pacific and Caribbean waters: olive ridley, leatherback, hawksbill, green and loggerhead) all of which feature in the International Union for Conservation of Nature’s (IUCN) Red List of threatened species, as vulnerable, endangered or critically endangered. Due to the severity of this threat, in the vast majority of countries across the globe, the hunting of turtles and the commercialisation of turtle products (e.g. eggs, shell, meat and oil) is completely illegal, and punishable by heavy fines and imprisonment. On paper, sea turtles are officially protected in Guatemala under the Law of Protected Areas (Decrees 4-89) with penalties of 5 to 10 years in prison and fines of up to $3000 for their commercialisation. In 1979, Guatemala ratified the Convention on International Trade in Endangered Species (CITES), and is also a registered party of the Inter-American Convention for the Conservation and Protection of Sea Turtles (IAC), both of which prohibit the intentional capture of and international trade of sea turtles and their derivates.

The reality however, is somewhat different. Every night, across the 254km of Pacific coastline, from July to December, the beaches come alive with emerging olive ridley turtles (locally known as ‘parlamas’) and thousands of hopeful egg collectors, ‘parlameros’, searching for nesting females. Due to the sheer numbers of collectors across the country, it is thought that nearly all nests are taken from Guatemala’s nesting beaches. Eggs are sold to compradores (buyers) at varying prices throughout the season, and can reach as little as Q5 a dozen. This means that an endangered sea turtle egg can cost about half the price of a standard chicken egg! The compradores transport the eggs from small coastal communities to busy city markets where they are sold raw (the white does not coagulate when cooked) with a shot of orange juice often spiced with chile. Sea turtle eggs are prized in Guatemala as a luxury food item and are also enjoyed by some men for their improperly alleged aphrodisiacal qualities. The annual economic value of this trade is estimated at approximately $3,000,000.

So, how did this paradox occur? During the mid 1980s, government-run CONAP (Consejo Nacional de Areas Protegidas), found themselves struggling to control the illegal egg harvest due to extremely high numbers of poachers operating in economically deprived coastal areas. In order to increase ‘conservation efforts’, CONAP initiated an informal ‘egg-donation system’. According to this system, local egg collectors are permitted to harvest unlimited quantities of sea turtle eggs, providing that 20% of the nest is donated to a local sea turtle hatchery for conservation purposes. Guatemala managed to gain an exception from the IAC rules with this system, under the condition that it is a ‘sustenance’ use of sea turtle eggs by traditional communities.

There are 18-26 hatcheries in operation each year along the Pacific coast, managed by various government institutions, NGO’s and private investors, whose role is to provide a secure area to receive donated eggs in order to safely incubate and hatch them. The parlameros are issued with receipts from the hatchery to prove the egg donation has been received. The remaining eggs are sold to a local comprador, who must obtain a different receipt in order to transport the eggs to sell. DIPRONA (the environment protection police) conduct irregular beach and bus patrols in order to check that the parlameros and compradores are collaborating with this system.

As a ‘conservation strategy’ this system is far from flawless. Since its introduction there has been a general lack of acceptance to the 20% donation rule. Instead, an unwritten agreement has been struck between the majority of hatcheries and the parlameros, where a standard donation of just one-dozen eggs is offered. Considering the average olive ridley nest is around 100 eggs, this can reduce the donation down to a meagre 12% of each nest. Not all parlameros and compradores collaborate even at this level, making the overall percentage of eggs protected even less. Considering only an estimated 1 in 1000 hatchlings survive to adulthood, these numbers seriously throw into question the idea of a ‘sustainable’ harvest.

Enforcement of the donation system is scant at best. Many hatcheries are understaffed and underfunded, making collaboration in many villages difficult to achieve. Another big problem area is the lack of scientific knowledge and standardised hatchery practices. Many basic turtle monitoring activities (e.g. daily nesting counts, tagging programs, thorough excavations of hatched nests, etc.) are absent due to lack of training and resources, leading to a huge deficit in essential monitoring and baseline data collection. It is impossible to assess true collaboration levels and long term conservation effectiveness of this strategy without this information. Community backing is also essential for this system to work. The hatchery must gain the trust of the community members, foster a mutual respect, help to address social and economic needs, ensure that the importance of sea turtle conservation is understood and achieve collaboration. Not an easy task to fulfil in economically deprived areas with few other income sources.

Egg harvesting is not the only threat that Guatemala’s sea turtle populations face. Beach development plays havoc with turtles; artificial lighting confuses nesting females and disorientates hatchlings, hotel walls and fences block access to nesting areas and beach traffic can scare and injure turtles. Each year numerous dead turtles wash up on Guatemala’s beaches, seemingly the victims of avoidable drowning in shrimp trawl nets. Water contamination and pollution are major enemies too. Even discarded plastic bags can result in death for a sea turtle, who often mistake them for tasty jellyfish snacks.

Throughout history, sea turtles have been utilised as an important food source and an economic asset. They have also always been a species of important cultural significance, featuring in creation stories, mythologies and ancient archaeological artefacts around the globe. In many modern cultures, sea turtle rituals are still common and they are revered for their spiritual connotations and their qualities of longevity and wisdom. Globally, the sea turtle is now an iconic symbol for the world’s oceans and has become a ‘flagship’ species for many international conservation efforts. But their perceived importance has not helped to save them from danger. Modern sea turtles have managed to survive in the Earth’s oceans for approximately 110 million years; it is only in recent times that they have become faced with extinction, owing almost completely to human activities. Some populations, such as the eastern Pacific leatherback, have dropped a staggering 99% in the last 20 years alone, due to threats such as egg harvesting and unsustainable fishing practices.

Sea turtles are a ‘keystone’ species, in that they play an integral role in the health, structure and complex functioning of marine and coastal habitats. Sea turtles are chief indicators to the health of ecosystems and can alert us to disruptions in their fragile oceanic habitats. They also act as ‘connectors’ between marine and coastal environments, transporting important and valuable nutrients from feeding to nesting grounds. The disappearance of such a key species would have dramatic and widespread effects, causing significant alterations and dysfunction within important ecosystems.

Sea turtle conservation in Guatemala has never been an easy task, but some highly commendable achievements have been made over the last few decades to protect these important animals. All hatchery staff and international volunteers should be congratulated for their continued efforts in challenging times.

And what of the future? In 2007, CONAP introduced a law outright banning the collection and sale of critically endangered leatherback and hawksbill eggs in Guatemala. Considering that annual nesting numbers for these species now barely reach double figures, it was a case of too little too late. Owing to the sheer extent of the egg trade, and the current lack of alternative incomes, whether it would be possible to effectively implement an outright ban on egg harvesting in Guatemala, (as recently occurred in El Salvador) remains to be seen. In the meantime, efforts need to continue in providing training and support for hatchery staff, standardising hatchery management practices, increasing community led conservation activities, addressing coastal economic and social issues, education, and raising awareness of the importance of conservation. With sufficient government, community and wider public support, it is not yet too late to turn the tide for the sea turtles of Guatemala.

Sarah Lucas is a director of Akazul – Community, conservation and ecology, a grass-roots initiative focused on preserving Guatemala’s marine and coastal habitats. Akazul operate the sea turtle conservation program in La Barrona, Jutiapa. To find out more about the work of Akazul and their volunteer opportunities, including sea turtle monitoring and community based activities, visit www.akazul.org

Not Black and White
By Bill McGowan
Monday, August 4th, 2014