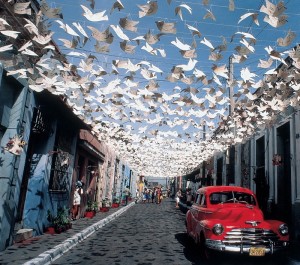 One of the most notable characteristics of 21st century Havana is what is not there: obvious and visible destitution. The begging and aggressive peddling prevalent in so many poor Latin capitals (and in most US cities) is entirely absent in Havana. There are no homeless people sleeping under bridges or hidden in doorways, no stumbling addicts crashed on park lawns, nor frantic children hawking candy and crafts. The sidewalks are crowded with workers and students and bureaucrats, rushing in every direction, often at a frenetic pace, but at no point is a visitor likely to encounter robbery or assault, or begging.

I recently spent a week in Cuba on a research tour, organized through the Canadian organization, Cuba Education Tours, with a group made up primarily of Canadian and American attorneys, union members, and researchers. It was an extraordinary experience, dispelling much of what I thought I knew about Cuba, and ultimately revealing more about the US than I had anticipated.

Two prevailing American misconceptions about Cuba were dispelled very early in our trip. One is the notion that the island is a society “closed” to the outside world, a stubborn throwback to another ideological moment. But this is typical American myopia, conjuring a country frozen in 1959, when the popular uprising displaced the American playground that was pre-Revolutionary Cuba. To be sure, the US economic blockade has had, and continues to have, a huge impact on the island’s economy, reflected most dramatically in the poor housing stock and lack of industrial development, but Cuba is hardly isolated from the world. Today, Havana is crawling with Canadian, Mexican, European, African, and East Asian tourists, students, and businessmen, and even a fair share of American backpackers and adventurers stealthily defying the US State Department.

The other common, but more complicated, American misconception is that Cuban society is less “free” than American society. We Americans still like to think we live in the Free World, if not the center of it, despite our massive surveillance state, a prison system unparalleled in its size and ferocity, and our militarized borders and restrictive immigration policies. But Cubans, our government and media tell us, are forced to live under a repressive, colorless, and undemocratic police state. This characterization comes as a surprise to most Cubans, who have minimal interactions with police (far less visible in Havana than in, say, Guatemala City or New York), engage in a lively electoral process every 2-1/2 years, and who seem to be among the most engaging and politically astute people I have ever encountered.

In the days following President Obama’s limited overtures to Cuba after the OAS meeting in April, the Administration’s point person on Cuba policy was not the Secretary of State, but Obama’s Economic Advisor, Lawrence Summers. According to Summers, “Cuba’s known what it needs to do for a very long time and it’s up to them in terms of their policies, their democratization and all the steps they can take and we’ll have to see what happens down the road.” President Obama himself echoed this line, lecturing Cubans that “if you take significant steps toward democracy, beginning with the freeing of all political prisoners, we will take steps to begin normalizing relations.”

This is extraordinary stuff at a time when the US is enduring international rebukes over its publicly-admitted widespread use of torture and the detention of thousands of foreigners and even US citizens without due process of law. According to the oppositional Cuban Commission for Human Rights and National Reconciliation (CCDHRN), there are currently 232 “political prisoners” in Cuba, not an insignificant number, but slightly fewer than the number of “enemy combatants” currently held in Guantanamo Bay. How could it be that 232 alleged political prisoners – some of whom are leftist opponents of the Castro government and hardly pro-American– represent the political basis for American hostility to the Cuban Revolution?

These 232 political prisoners have about as much relevance to the US blockade of Cuba as Saddam Hussein’s non-existent “weapons of mass destruction” had to the decision to invade Iraq. The selection of Summers as a spokesman on US-Cuba policy, a man whose misogynistic and anti-democratic tendencies were on full display during his short tenure at Harvard, would be odd if the policy issues truly involved democratic freedoms. But of course, the real problem is not with the Cuban political system but with its economic system.

In Cuba, 85 percent of the population owns their own homes, mortgage-free. They have unrestricted access to high quality health care and a guarantee of a free public education through the university level. Teachers and community organizations have pivotal roles in determining educational priorities and curricula, ensuring the accessibility and relevance of the educational system. Every Cuban is guaranteed a basic income, and a job if they can work. One could go on about the percentage of female medical doctors (62 percent) or universal literacy (99.4 percent) or the number of incarcerated juveniles (zero), but in the US, such basic values have nothing to do with democracy or freedom. “Freedom” is reserved for markets and capital flow.

My own trip to Cuba coincided with the 50th May Day celebration since the Cuban Revolution. For many Americans, the notion of International Workers Day might seem passé, a strange cousin to our own Labor Day celebrations of barbeque and the end of summer. Particularly in 2009, as American workers watch their hopes for long-term job security, health care, college educations, and a stable retirement dissolve in the face of economic meltdown, the notion of working class power feels highly theoretical.