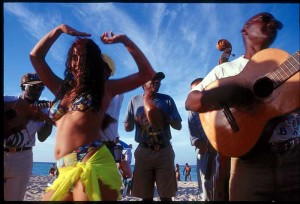 But in Havana, May Day is not “Labor Day.” It is both an act of defiance and a celebration of the survival of Cuban socialism. The 2009 May Day march was more than a million strong – ten percent of the entire population of the island marches – with unionists and community organizations from across the island massed for the festive occasion. The teachers union led off the march this year, with their block-wide banner, “Education is a Labor of Infinite Love,” followed by a three-hour jubilant parade of teachers, doctors, construction workers, dancers and artists, taxi drivers, students, and even scientists and engineers marching past the official reviewing stand. Their hand-made signs declare “We Are A Free Country” and “We Defend Our Socialism,” and of course hundreds of portraits of Che.

One sign in particular caught my eye, and seemed to explain the key role of Larry Summers in the debate over “freedom” and “democracy” in Cuba.

Somewhat poorly translated, the sign reads: “In capitalism in crisis, they impose unemployment on thousands and they close industries. How the working class suffers! Under socialism it is completely different. They create factories and industries, They provide jobs and guarantee work for those affected. We want socialism! Long live Fidel!”

Yes, this is a country that has been led by one man for most of the last fifty years, one of the most successful personality cults in world history. It is a country where travel abroad is difficult for most, and restricted for others, where political parties are banned and the official, monotonous state media allows little room for dissenting views. And most importantly, it is a country where resources are scarce and life can be very difficult for the mass of people.

But it is also a country without health insurance companies, home mortgages, or a usurious banking industry, and not accidentally, a country without unemployment or homelessness. It is a place where laid off sugar cane workers can go to school at state expense to become social workers or organic farmers, where masses of people from all strata of society participate in decisions about the economy and social development. Cubans do not depend on stock market gambles to provide for their retirement (at age 55) nor do they lose health insurance if they quit their jobs. Compare the aftermath of Hurricane Katrina in 2005, from which New Orleans may never recover, with the devastating hurricanes that hit Cuba during the summer of 2008. In Cuba, there were no casualties, and the storms resulted in not even a single missed school day as teachers moved to makeshift classrooms, and friends and neighbors provided emergency housing.

The American demand that Cuba “change” in order to normalize relations with the United States is in fact anti-democratic, calling for a reversal of the current and overwhelmingly popular economic status quo. In return for an end to US hostility, Cubans must accept multinational corporate domination and privatized education and health care. They must allow the importation of consumer goods, the crushing of domestic industry and agriculture, and, most importantly, unfettered access for international finance. Only then, when Cuba begins to resemble Guatemala or Haiti or Mexico, will the Americans agree to “normal” relations and end nearly 50 years of terror. Only then will Cuba resemble the kind of American-style “democracy” supported by Barack Obama and Larry Summers.

But what became apparent to me as a first-time traveler to Cuba is that the official calls for “democracy in Cuba” are strictly for American consumption. The US blockade of Cuba, and restrictions on American travel there, must continue until there is no longer a Cuban Revolution. Otherwise, Americans might begin to envision a world where health care, education, and pensions are truly rights of residency; where industry is developed to support human needs, not scrapped for the benefit of creditors; and where egalitarianism is a realizable goal, not a utopian fantasy. Americans must never be permitted to see that, even in a flawed socialist economy in a tiny island country, there is no homelessness or starvation or unemployment or illiteracy. It might give us dangerous ideas about “Change We Can Believe In.”

Philip Fornaci is a prisoners’ rights attorney based in Washington, DC.