Twenty some years ago, when a young, self taught artist named Alfredo Garcia Gil started shopping his paintings of some of the less reputable citizens of Antigua, including whores, johns and drunks around the  town’s conservative gallery culture he couldn’t even get in the door.  The galleries wanted unprovocative, easily digestible paintings that could be sold to those with disposable income and the studied belief that Antigua is a town of pure colonial charm.  It was an art culture that reduced this vibrant city to a sterile movie set.  For Garcia Gil the soul of the city couldn’t be found with such simplicity and he was determined to bring the more profound truths of his world to his canvas and to the public.

Yet, he still needed to put food on the table, so he joined the ranks of the street painters that line 5th Avenue, reproducing La Merced, el Arco and Volcan de Agua – over and over again.  His paintings, widely considered to be amongst the best in that field, fed the market and the earnings fed his family.  But, at night, Alfredo continued to develop his vision and his art.  Thankfully, over the past two decades the market has matured and Garcia Gil’s more substantial pieces are reaching an audience increasingly willing to contemplate Guatemala as a living thing – beautiful and tragic, inspired and muleheaded, progressive and regressive – rather than the postcard perfection marketed by the gallery owners a generation ago.

Each of Garcia Gil’s paintings demand a recognition that the people of this country, their traditions and their culture are both passionately alive and gravely threatened by predatory forces.

With these observations, Garcia Gil wishes to provoke his audience – Chapin or Extranjero, wealthy or poor, criollo, mestizo or indigenous – to reflect on the humanity of his subjects and the bestiality with which they so often treat one another.

Note that in each of these paintings the eyes of the subjects are obscured.  Garcia Gil says that he presents his subjects this way because he is not interested in castigating individuals or reducing the stories to specific characters.  And as the subjects aren’t anyone individually, they are everyone collectively.  They are us and we are them and in this very ringing sense, Alfredo Garcia Gil is still very much an artist painting from the Antiguañan Street. 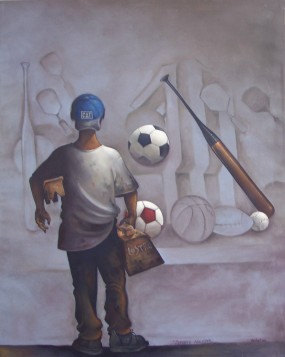 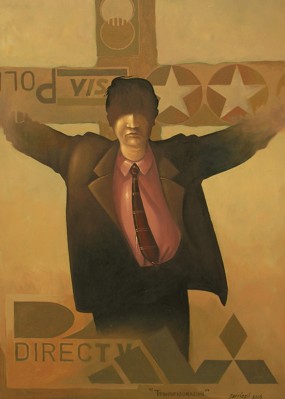 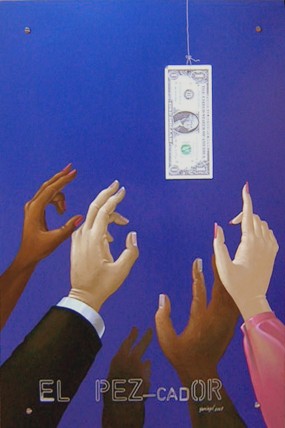 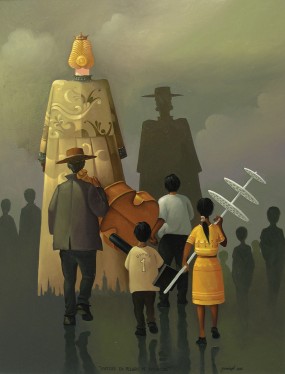 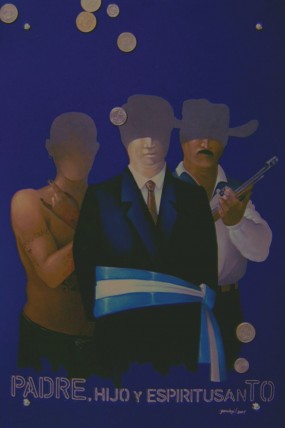 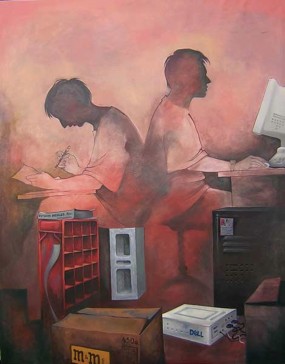 In What Light Shall We See One Another?
By Michael Tallon
Sunday, May 9th, 2010