In January of 2008, back when La Cuadra was still a stumbling puppy of a magazine, we featured the work of Alfredo Garcia Gil. It was only the second issue published by the current editor-in-chief, and we were very much up in the air as to how we should move forward. And, as it happens, our decision to feature Alfredo went a long way toward defining the goals and basic concepts of our publication. Put another way, Alfredo Garcia Gil is a part of the reason that La Cuadra looks and reads the way it does. For that we owe him our very great thanks.

At the time, in considering layout and design options, we were conflicted: Should we be more of a news magazine, with a topical cover that matched a given story or important event with every issue? Should we be more of a satirical magazine, and make each cover an elaborate joke? Or, should we try to encompass politics, news, satire, culture, and prominently feature local art as well?

We took the final option, but it wasn’t an easy call. The other English language magazines in Guatemala often shared the work of local artists, but they were, almost invariably, middle-of-the-road, unchallenging features.  Both the magazines and the artists seemed reluctant to rock the boat, timid of a challenging statement that might offend their audience or their advertisers. While that’s likely a better business model that ours, the thought of it bored us to tears.

At the time, we didn’t know many folks in the art world, and most of what we saw seemed to speak of the above mentioned timidity. Then one afternoon we happened by the Antigua Galería de Arte when they were hanging a Garcia Gil show, and we knew what we had to do. First, we had to convince Alfredo to allow us to feature his work in our magazine, and second, we needed to commit ourselves to finding provocative, thoughtful artists to bring to our readers every issue. That challenge hasn’t always been easy. Garcia Gils don’t just grow on jocote trees, you know!

Thankfully, as Alfredo has a new show up at the Galería, we have the opportunity to share his mastery with you once again.

Alfredo’s work is both playful and aggressive. His palette is shockingly alive and unapologetically Guatemalan. His themes of cultural conflict and societal syncretism are always arresting, and at times, downright chilling. The viewer, often first drawn in by the brilliance of the colors, and the skillful use of shadow and light, doesn’t notice the dichotomy between image and iconography. But then, like the proverbial ton of bricks, it breaks the plane. Suddenly, the indifference of los gigantes to los niños, is profoundly disturbing. The whore wearing the Guatemalan flag is . . . unsettling, but instructive. The submerging of colonial columns into the vegetation of the tropics is tragic to the same degree that it is hopeful, and then it is somehow terribly sad all over again. Wow.

Alfredo Garcia Gil has been making us consider our adoptive country more deeply for years now, and we’re so very happy that we have the opportunity to share him with you once again. His work will be on display through December at La Antigua Galería de Arte, located on 4th Calle Oriente, No. 15, between 1st and 2nd Avenues through December. 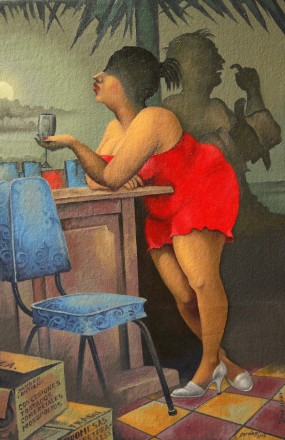 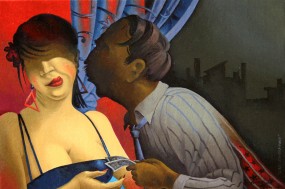 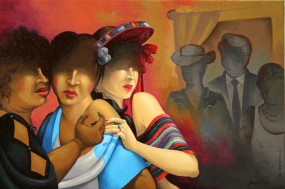 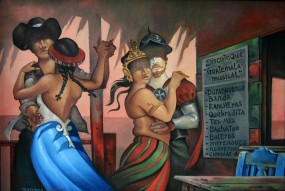 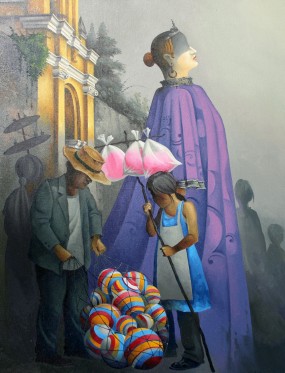 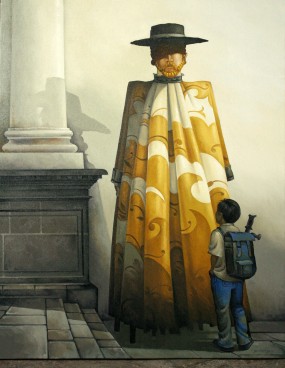 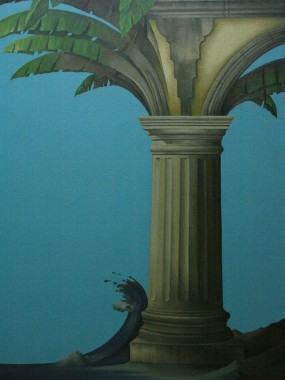 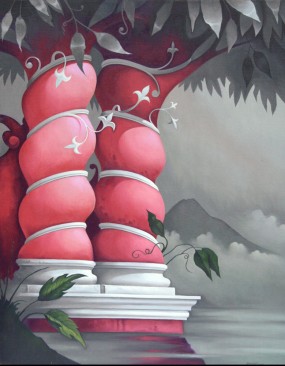