We’ve known J.P. Canale as long as we’ve been in town. He is now a man in full, at 38 years of age, but back in his heady, younger years, he was a regular staple of the bar scene, most particularly at our very own Café No Sé. In that time, now just gone a decade, we’ve known him as he matured as a man and an artist. Those twin processes have been both thoughtful and intentional.

Years back he was a noodler of sorts, very gifted in representing form but, as said in a recent interview, he was just “giving people what they wanted, something to make them feel good.” That was mostly well-rendered life drawings and caricatures. But in the past ten years, he’s sought deeply for his artistic voice.

We believe he’s found it.

While at first blush his paintings still elicit a smile, in each one there is a story being told. Those stories, more often than not, find their structure in his efforts to shed the preconditioning of a life once based in consumer culture and the sexually and intellectually repressive religious world of his Catholic upbringing.

The clown, which is an icon he has been rendering for years now, is a conscious representation of his childlike self. But it is one that he is trying, in his words, “to kill.”

It is decidedly not that he is trying to kill the playfulness in his soul, but rather to put it in its place, given the complexities of a mature worldview. So, give that clown a cigarette and a gun. Have him take aim at himself or the pervasive, facile interconnections of a digitized world. This clown is looking for redemption, a rebirth into a world where he can joyfully poke fun at the structures, the dominant paradigms and narratives that seek to contain us all.

J.P. enjoys folks finding the stories themselves, but just as a primer, consider some of the images in the gallery below. Divina Coexistencia (Divine Coexistence) suggests that the question of the chicken and the egg blinds us to the human realities of a need for love and compassion in this very moment. Then consider Sexualidad Reprimida (Repressed Sexuality) showing a hooded female figure with her genitals shaded in modesty, but still holding forward in her left hand what the world so often sees first, her chompipa, an alternative title for the painting and a term in Guatemalan slang that roughly means “female turkey,” but translates best as “pussy.”

The humor in his paintings abides, the clown is in transcendence, but the images — be they of sexual repression or class repression or the repression of preconceived notions — reach out for a higher plane.

The best way to see J.P. Canale’s work, if you are in Guatemala, is to give him a call and visit with him at his studio. We strongly suggest you make it a part of your visit to our adoptive hometown. 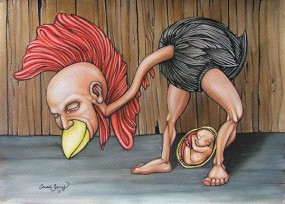 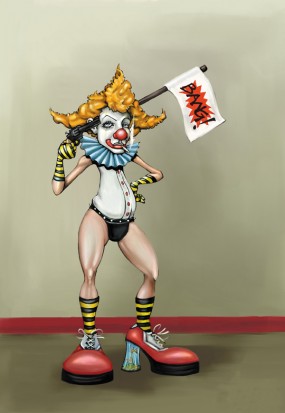 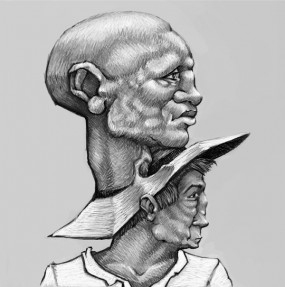 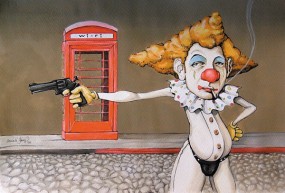 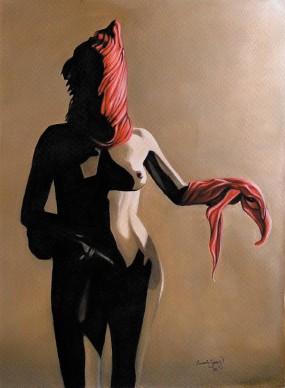 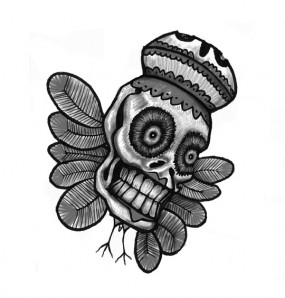 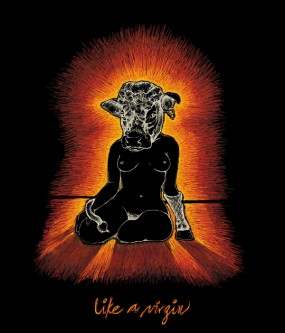