We last featured the work of Patrick McGrath Muñiz in the Spring of 2009 (La Cuadra, Volume III, Issue 4). At that time we wrote, “with the talent of an old master and the raw, intellectual wit of his millennial generation, [the artist] challenges his viewers to consider the interrelationships between our mass-media -driven culture and the longer traditions of the Western world. The results are, at the same time, satirically comedic and deeply disturbing.”

We stand by that assertion, though we’re no longer disturbed, in any way, by the images. Enthralled is more like it. McGrath’s complex use of interplaying iconographies from different cultures across historical eras have worked their way into our psyche and worldview. So much so, that we are now aware of the quotidian realities he describes in these quasi-sacred, quasi-profane images.

Which is a rather fancy-pants way of suggesting that the next time you’re out for a stroll in Antigua, keep your eyes open for the hidden hand of history. Note when you see a group of teenagers walking the cobblestone streets of our adoptive hometown that some sport Megadeth tee-shirts, while others favor school uniforms or images of a Jesus in the midst of his Passion. Listen to them. Sometimes they speak Spanish, sometimes Kaqchiquel. Sometimes you’ll hear them laughing with (or sometimes at), the indigenous women in the Parque Central. Sometimes, after stopping by the tienda for a few bottles of Coca-Cola poured into individual plastic bags, they might run onto the piazza of the Cathedral and practice hip-hop dance moves last seen on the streets of New York City in 1989.

Their reality bears the marks of Christianity, conflict, centuries, consumer culture, and the divisions of class inherent to a contemporary neocolonial world. Yet, if you asked them why they danced, dressed and acted as they do, they’d scratch their heads and say, “Porque nos gusta.” Because we like it. But why?

There is an active way to consider the world around us and Patrick McGrath asks his audience to lean forward into the complexity and catch the winds full on. Those of us in Antigua will soon have the opportunity to experience that artistically once again, as McGrath’s latest work will be on display through November of 2013 at La Antigua Galería de Arte.

In the artist’s own words, “The present collection of oil paintings on canvas and wood are inspired by the sacred imagery of the Virgin Mary from Spanish Colonial art. By re-contextualizing colonial iconography, the work responds to some of the current global and neocolonial issues that affect the Americas today. The depictions of contemporary ‘Madonnas’ are visited by characters and narratives that derive from pop culture, consumerism, Hollywood and the Mass Media Apparatus. Those interventions reflect on how the environment, economy and culture of former colonies have become heavily influenced and indoctrinated by new colonial powers, large transnational corporations and the global market economy.”

This is serious, challenging, critical work; but at the same time, it is also just a blast. For us, part of the fun with Patrick McGrath’s paintings is diving into the symbolic symphonies and seeing what you find. With that in mind, we won’t distract you from your own discoveries beyond this one observation: The publishers of this magazine have discussed at length — often late at night and towards the bottom of a bottle — if, as Techno Madonna seems to suggest —  the noösphere will actually set us free. One can make the argument that the Book from which the original line was cribbed didn’t do such a bang up job over the centuries.

Please browse this virtual gallery, but don’t miss the real show which is opening Sunday, November 9, 2013, from 4 to 7 PM at La Antigua Galería de Arte on 4th Calle Oriente, #15. The artist will attend the opening. The show will run through December, 2013. 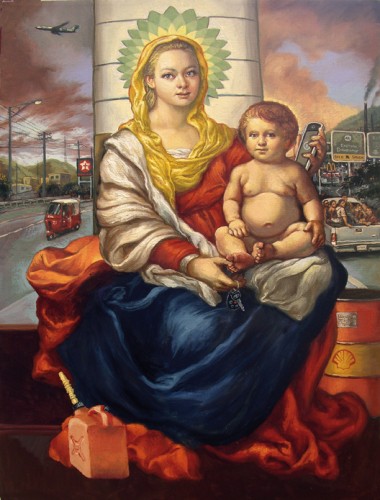 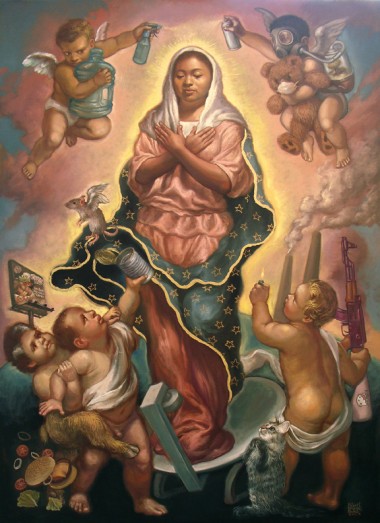 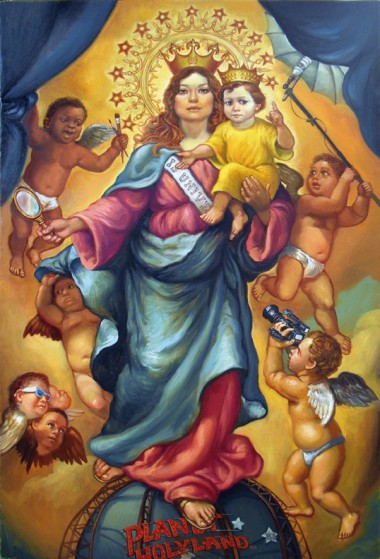 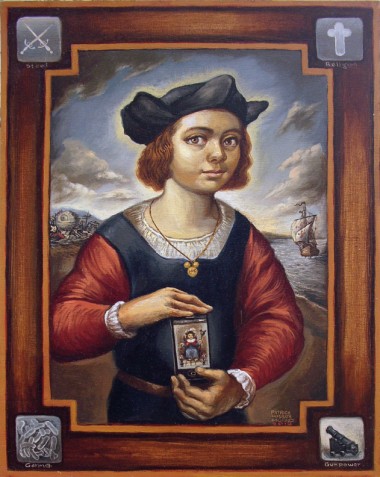 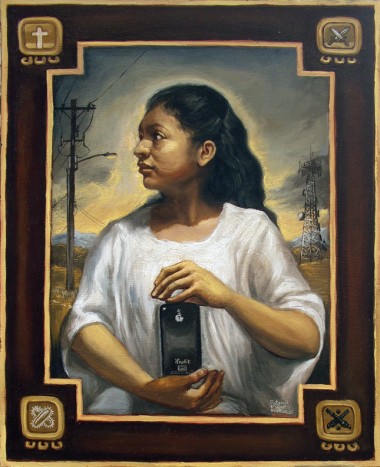 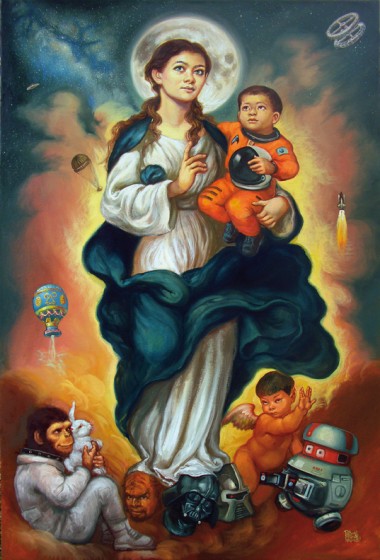 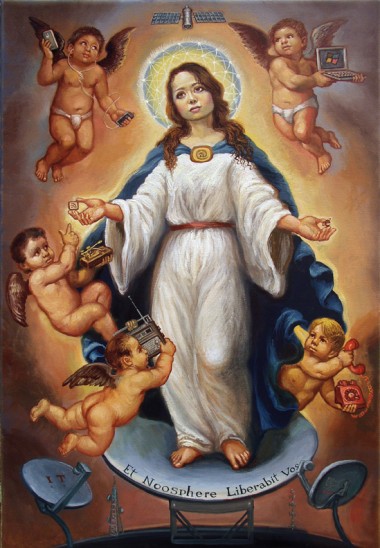 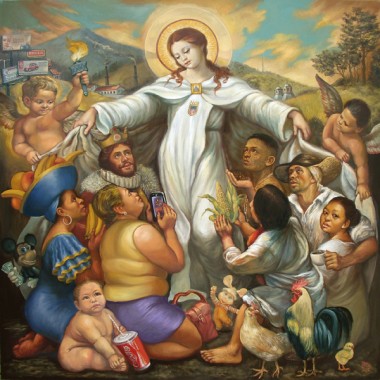