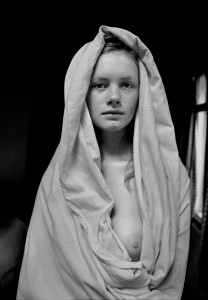 Renato Osoy told me that his subjects are always an accident and a marvelous coincidence.  I can’t say that I really believe him.  It strikes me more that these are the words of a very talented and humble man.

Certainly a photographer needs to be the beneficiary of grace more so than artists in other media, but if it were all just accident and coincidence we’d all be pretty damn good at it, and we’re not.  Each of us have a few great sunsets in the files and maybe a pretty picture of a mountain at dawn, but that isn’t us – it’s God and a bit of persistence. But to get a shot that becomes an icon, or tells a story, or is a metaphor goes well beyond time, chance and a lens, it’s the art that lives in the interior world of the artist.

Renato Osoy’s work, presented in two recent books (Fotografía, and Altiplano Infinito / Infinite Highland – Nativo Press, Guatemala) show this inner world with great sensitivity.  In both books he brings to his audience a unique eye, developed over a decade in his work on several continents.

Whether his subject is a model in a studio or campesinos in the Altiplano, his work always carries a narrative or reveals a hidden tension in the human condition.

Consider Eva, pictured at the beginning of this piece. Here is a girl as indifferent to your eye as if she were made of marble, yet one strand of hair, just visible, drapes seductively down her neck, drawing the eye to her exposed breast.  The cloth around her recalls a Madonna in Pieta, yet the shape of the folds, revealing her soft form is graphically sensual.  She is the tension of youth, trapped between religious and cultural expectation and bodily desire.  What she holds back with her stare, she allows us with her form.

Now look at Volcan Pacaya. Certainly, the viewer is first drawn to the line of lava, then to the figures in the foreground.  The event is momentous, it is dramatic, it is alive with the light and fire of the earth.  But what Osoy’s lens gives us is deeper.  The visual narrative is in the disinterest of the figures to the phenomenon behind them.  They walked through the dark to get here.  They are standing, literally, over a crack in the Earth as it forms and reforms itself in a process that harkens back to a time before life.  And yet we, as human beings can so quickly can become inured to such beauty and power.  Without intention our fascination with universal powers has been reduced to indifference.  A box has been ticked off the traveler’s to do list and then it’s time to hit the pub.

Look at the three men resting from their work on the hard and stubborn ground of the Guatemalan Highlands. See the family in their faces.  See their tradition in their traje.  See the trees that are older than them all, and now imagine this scene 20 years ago, the father in this photo as a young man with his brother and his own old man.  In this photograph Osoy captures the transient, the circular and the eternal for the farmer the world over.

Wonder, for a moment, about the dog safe in the middle of a road that sees little traffic.  Note the signs turned away from the viewer, and the two Mayan girls straining to read the Coca Cola billboards as her mother goes about her ways.   Sense the loneliness of this locale, and the familiarity of family that Osoy captures in a fleeting moment with his lens.

I spoke, at length, with the artist about the photograph featured on the following page.  It seems at first to be blatantly sacrilegious.  The full figured and bare breasted young woman wears the veil of mourning while fantasizing about the savior of mankind.  It’s the kind of thing that would get the Religious right up in arms, but it is deep and serious commentary.

The image of Christ is actually a bath towel the artist found in the Antigua market.

These stories – these visual lessons – each one an unfolding hidden truth, are more than just accident or marvelous coincidence.  They are manifestations of the skill and the vision which live in the heart of this very talented man.

Over the coming decades, Renato Osoy will deserve his success, and we will wait for the stories to come.

Renato Osoy, 29, is from Guatemala City.  He is currently living and working in Hamburg, Germany. More of his work can be seen at www.renatosoy.com. 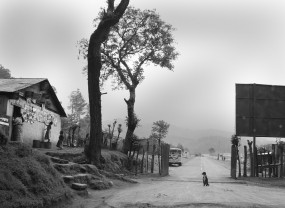 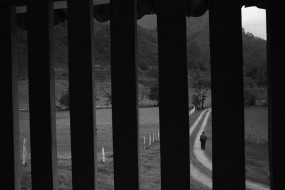 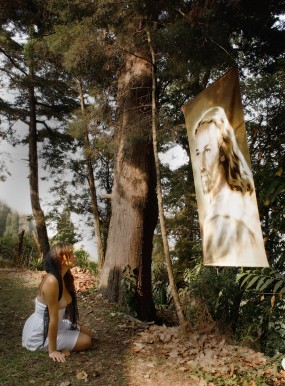 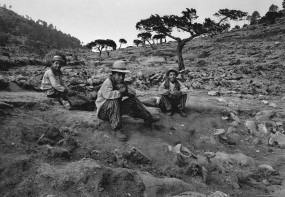 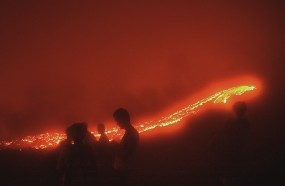