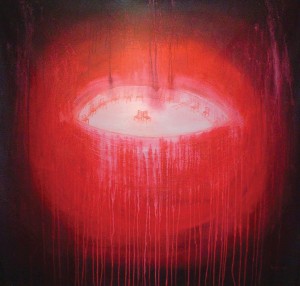 Arguably the first aspect of Sergio Valenzuela’s work that strikes the viewer is his choice of palette. The selection of deep reds, running rich between the contrast of whites and blacks, resonates like a minor chord played deep in the psychic register. It is a color scheme that roots us in our corporal, visceral substance, and by so doing faces us, not so much with what we like to think of as our humanity, but with our humanness — our temporality, our carnality. And, yet, Valenz’s paintings are at the same time cerebral dreamscapes that explore the artist’s own inner world, while making an unrelenting request that we journey inside, as well.

Within the borders of the work, Valenz introduces repeated and yet discordant themes that ride within the colors. He chooses familiar, angular, mechanical objects: chairs, stages, tables, abodes — all of which remain steadfastly empty, as if you’ve come upon the scene too late and all that is left is the tableau and a lingering question.

The only human representation in the paintings are faceless figures, each in some sense of unbalance. Perched upon their wheels or posed inexplicably on a summit, they are the mute chorus of the images, players that wish to explain what has happened, what will happen again — and yet they remain unable to connect with one another or the viewer. They appear somehow in mid-aria without a voice.

From his brush, Valenz’s brings one last recurrent form: the ladder — suggesting at a chance of transcendence or at least a practicable hope of escape.

Valenz is not easy. He is challenging and ruminative. And taken as a whole, his paintings — mechanical forms imprinted, as they are, within the mind and muscle of the human animal — define the edges of a struggle to understand self. 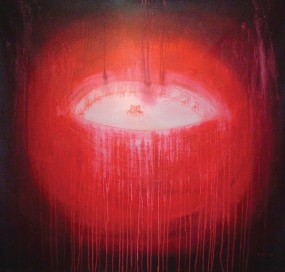 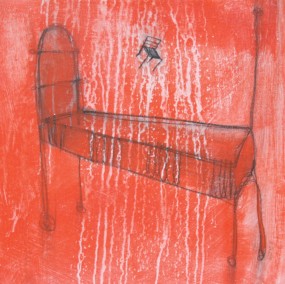 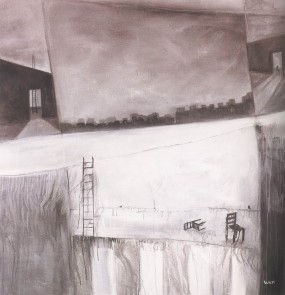 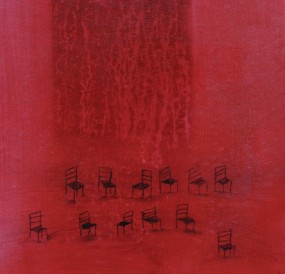 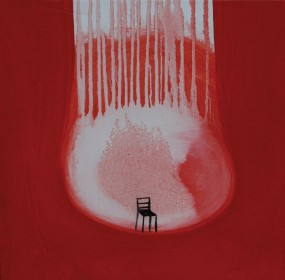