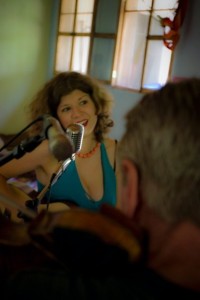 Corrina and Jueves, two individuals of incredible drive and electricity,  shared their thoughts about the power of documenting, registering and recording all the musicians in town. Jueves recently pointed out that being a musician in a travelers’ town like Antigua can be a pretty rough business. The pay is generally lousy, the energy needed to inspire the audience to feel some joy beyond their normal days and ways is demanding, and in general, when an artist is done with his fourth or fifth show of a week, the reserves just aren’t often there to go to another bar and check out what other artists are doing.

Both he and Corrina knew that overcoming that inertia would be difficult and would require setting some lofty goals. And so they did.

With the help of a core group of friends and artists, Jueves and Corrina set out to recruit as much of Antigua’s young talent as they could. Their aim was to record a full, 12 song compilation CD, to stage a festival or two, and to develop professional connections with the cultural world of Guatemala which might bring more gigs, music and creativity (not to mention money) into the budding Antigua music scene they hoped to create.

We’re certainly not the first to ever observe that Antigua is a bit of an Island of Misfit Toys, and with a few notable exceptions, “gumption” and “stick-to-it-tiveness” have rarely been found in surplus around these parts. Writ short, when I first heard about the idea I figured they’d never pull it off and it wasn’t until my friend Syd (pictured above) invited me over to her apartment to listen to the CD that I gave them a second thought.

That was fully my mistake, and I make a public apology here and now to any an all involved in the process for my doubts. Y’all have put out one of the best compilations of music these ears have heard in a very long while.

Before listening to the CD, Syd had been on my ass for a few weeks about committing to attend the festival, held this past August at a friend’s place just out of town. As is my style, I kept my “maybe” options open. But after drinking a few beers and jamming to that CD, I was committed – and the festival, as it turned out, was just about the most fun I’ve had in town in five years.