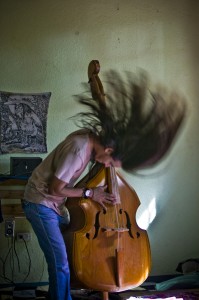 And now it’s down to you. Readers, visitors, business owners who might be able to lend a hand or provide a venue, give these guys a few more minutes of your time. Visit them on the web at www.myspace.com/latortilla. There you can stream a few of their tracks. After that, drop by Reilly’s, Rum Bar, Cafe No Se or El Hostal to pick up one of the CD’s. They’re only 10 bucks a piece.A short film about the creation of La Tortilla was made by the award winning professional photographer, Eric Stone. It’s a fantastic short movie and the shots of Dr. Baker riding a rope swing on Planet Earth are worth whatever effort it may take to click the link. We’re working out the technical issues involved in posting the video. It should be up in a day or two.

And if you’re a musician in town and want to find out how you can get involved, drop Jueves a line at latortilla.antigua@gmail.com. Word is he’s currently up at the lake tracking down other musicians, venues and opportunities – and we’re dying to see what he’s got cooking now on our recently unified tribal fire. Now go grab a guitar and play us a song. The fires are burning.

All photos in this story were taken by Eric Stone. To see more of his work, visit his website at www.estonephoto.com

To read about our previously featured artists, click here.