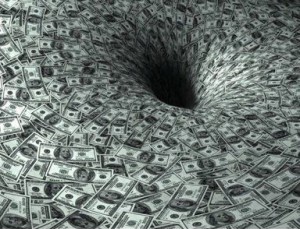 Next to an ancestor cross, where Ixil priests make regular offerings, lives one of Nebaj’s better-known financial speculators. Doña Alfonsa (not her real name) has eight children and sells food in the market. She doesn’t own a motor vehicle but she does have a cell phone. Her story is well-known because she has repeatedly apologized for it. In 2005, Alfonsa and her husband began asking their neighbors for huge loans. They offered to pay interest of 10% and 15% per month and presented their house and agricultural land as collateral. Then they transferred the funds to four acquaintances who promised them interest of 15% and 20% per month. Of their four business partners, three were K’iche’ Mayas who said they were guiadores de préstamos (roughly, loan advisers) sending local men to work in the United States. The fourth, an Ixil village leader and former functionary of the Guerrilla Army of the Poor, said that he needed seed money to attract an international aid project. And so the couple borrowed circa Q500,000 (at 7.8 quetzals to the dollar, US$64,000) and turned it over to the four. They expected to reap millions.

What they didn’t know is that their partners invested the funds in, not emigrants or projects, but a Mam Maya priest who promised riches from the volcanoes of Quezaltenango. At last report, this spellbinding practitioner of Mayan tradition was the object of an arrest warrant, a problem that was not interfering with his used-car business on the Mexican border. Back in Nebaj, the title to Alfonsa’s house fell into the hands of a bank, she was summoned to court, and she was about to lose her house when the bank agreed to refinance Q225,000 of the debt. She and her family will be able to keep their home as long as they make mortgage payments of Q3,000 a month. The only way they can generate Q36,000 (US$4,600) a year is in the U.S. labor market, to which end Alfonsa’s husband has joined their son in Houston, where the two are washing dishes in restaurants but having trouble finding enough hours. If they hang on in the United States, and if they remit faithfully, their house will be in the clear as early as 2024.

If you had told me this story a few years ago, I wouldn’t believe you. How can Guatemalans with household incomes of $1500 or so per year make $10,000 loans? How can they charge each other monthly interest rates of 10%, 15%, even 20%? Last but not least, how can their scramble to earn dollars in the U.S. make them poorer? These are not easy questions, but the answers lead back to two sacred cows in the current pantheon of wishful thinking: 1) microcredit and 2) unauthorized border-crossing in search of a better life.

Nebaj was hit hard in Guatemala’s civil war (it’s one of the towns for which genocide lawsuits have been filed), and it has received more aid projects than any other Mayan town. Yet no amount of aid will address a basic problem. Thanks to vaccination campaigns and potable water projects, most children are surviving to adulthood. Nebaj parents have been slow to reduce their pregnancies, women still average six children and the population is approaching five times what it was before the Spanish Conquest. The land base has become so fractured that most Nebajenses do not inherit enough land for subsistence farming. Local jobs pay four to eight dollars a day, which is enough to feed a family but not enough to pay for the consumer goods that Nebajenses now admire and want.

When I visited Nebaj for the first time in November 1982, it was a quiet, scared town occupied by the Guatemalan army as it chased Marxist guerrillas in the surrounding mountains. At one point much of the Mayan population, which is predominantly Ixil but includes a dynamic K’iche’ minority, seemed to support the Guerrilla Army of the Poor not just in Nebaj but in the neighboring municipios of Cotzal and Chajul. In retaliation, the Guatemalan army committed massacres and burned down the rural settlements. Thousands of people died, and more than a third of the population took refuge in born-again Protestant churches, whose members now provide a majority of the town’s leadership.

Since then the guerrillas have demobilized, the army has dwindled to a platoon, and Nebaj has become the most bustling town in the region. Thanks to the many aid projects, Ixils and their K’iche’ neighbors have replaced the domestic livestock they lost in the war. They are growing a wider repertoire of agricultural products. Shuttle looms bang out textiles. Ixils have taken over the local teaching profession, and thousands of Ixil youth have obtained secondary education. Ixils are in charge of the municipal government, dozens of Protestant congregations, and the Catholic parish. The streets are filled with pickups, motorcycles, and careening three-wheeled taxis. Teenage girls clump by in high heels gabbing on cell phones. A delegate from the European Union visited for the first time, saw all the three-story houses going up, and exclaimed: “This has got to be the drug trade!”

No, it is first of all the result of international projects, especially from the European Union, in an aid bonanza that began in the late 1980s and shows no sign of ending. The justification for the endless parade of new programs is that most of Nebaj’s population was displaced by the war. True, but equally devastated municipios have never been deluged with projects like the Nebajenses. What makes them such a magnet for international donors? Looking handsome, having a knack for getting on with foreigners, and living in a majestic mountain valley have not hurt, and so the Ixils have become calendar Mayas, in two senses. Their diviners still use the Mayan calendar, and the splendor of their traditional female dress gets them into calendars put out by aid organizations as symbolic capital for fundraising.

This is not to say that the Ixil-internationalist marriage is a happy one. What motivates the Ixils welcoming international organizations is their desire to superar (get ahead), not their loyalty to the picturesque traditions that foreigners so prize. While some families are plaintiffs in the genocide indictments against former dictator General Efraín Ríos Montt (1982–1983), many more Ixils have voted for Ríos and his political party on repeated occasions. When Guatemalan voters turned against Ríos in the 2003 election, all three Ixil municipios elected mayors from his political party. Yet Nebaj is so attractive to international donors that they have chosen to overlook its political conservatism and born again religiosity.