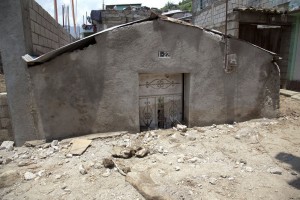 On my first night in Guatemala, I sat at the circular bar in El Portal, a little café on Antigua’s parque central, watching women in long skirts with complicated patterns make their way from bench to bench selling necklaces. Lights illuminated the pillars of the white cathedral, and water arched from a fountain in the center of the town square. Cars passed on the cobbled street.

I had hustled from La Aurora Airport in Guatemala City to Antigua without stopping in the sprawling capital. Most tourists use this colonial city, which at times seems to have been surrendered to ex-pats, as their base. Here you can drink good coffee and eat tofu and, surrounded by stucco and crumbling churches, feel as if you have arrived in a postcard of Central America.

A Guatemalan woman sat to my right on the end of the bar. She asked me where I was from. “New York,” I said in Spanish. She had family there, a sister, in Queens. I live in Brooklyn, I told her. Then using a saltshaker and a packet of sugar I showed her the lay of the land.

Across the bar, an attractive Guatemalan couple nuzzled over a sweet, well-iced slice of cake, their backs to a large flatscreen television. Flatscreens, I would learn, like fingerprint scanners and cell phones, were common in this country of high telecom investment. Someone commented that the television wasn’t on.

“It doesn’t work,” said the waitress behind the bar. They asked her why.

She smiled. “Because this is Guatemala.”

The people sipping coffee along the bar nodded. They all seemed to understand.

I came to Guatemala to leave New York. I wanted to put reporting aside, to take a break from conversations with strangers about life and death and social fabric for two weeks, and bury unfinished business beneath a new landscape, a new language, a good book. I could have gone anywhere, but my friend Nadia Sussman suggested I tag along while she visited old friends first in Antigua, then in a city called Quetzaltenango, also known by its K’iche’ Indian name, Xelajú.

Because my planning had consisted of little more than checking dates before I’d bought the ticket and slapped together my bag, I arrived with too few t-shirts and little context. I knew only vaguely of the 36-year civil war that involved the killing of 200,000, the widespread social inequalities and crime. I didn’t know of the distinguishingly high number of homicides, which, according the Economist Intelligence Unit, reached 6,200 in 2008 among a population of 13 million. I didn’t know of the rampant deforestation or the poorly planned water systems or the government corruption. I also didn’t check the weather.

In late May, as I was heading towards Guatemala the amoebic glob of Tropical Storm Agatha, the first of the 2010 season, began to congeal on satellite screens. First came the rain, uncharacteristically heavy for that time of year. On the morning of Saturday, May 29, the patter of water on tin roofs became a drone.

I was in Xela by then, a city of 300,000 in the western highlands. Information about the storm passed from house to house. There was word of rising water and people rowing out of their homes in the city’s low-lying Zone 2. News came in from the surrounding towns in the department of Quetzaltenango. Mudslides had devastated farms in Zunil, they said, burying the country’s onions and carrots under thick, wet volcanic soil. The road to la capital was impassable.

On Saturday afternoon I sat with Nadia and Sandra, our host, in the kitchen of the house that doubled as a comedor, the sort of ad-hoc restaurants common in Guatemalan neighborhoods. The young men who ate their three daily meals here leaned over their plates, chewing thick tortillas. One of the men, Bernabe, said he had heard from his family in Sololá. They were okay, but mudslides had crushed cinder block houses. Families had been evacuated to shelters, and there were fallecidos.