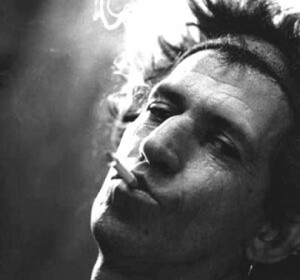 The image in Google was labeled RICHARDS. I clicked the link which led to a rock blog, but there was no reference to who painted the picture. I copied the picture to my desktop and later used it as part of an ad in this magazine to advertise my Tequila Bar.

Here is where it gets weird, serendipitously mezcal kind of weird.

Several weeks later I was doing some research on graffiti artists and muralists from Mexico. (I had recently been to Oaxaca where graffiti art tattooed every wall in protest against the local governor.) While doing this I randomly came across the work of the Mexican born painter George Yepes who was one of the more prolific Los Angeles painters in the Chicano Mural Movement of the late 70’s and founder of the San Antonio, Texas “Art Dacha” Movement.  (See sidebar on Yepes.) I went to his website and was surprised to find that he had painted the picture that has the likeness of Keith Richards, and that it is entitled, get this, Soy Ilegal. Ok, big deal, coincidence: Soy Ilegal, ILEGAL-MEZCAL.  But I have always believed there is no such thing as coincidence, and that if you are willing to let chance take you by the hand you will encounter its underlying magic.

Months passed while I waited for chance to knock on my door. People commented on the ad and I told them the story. Then one day a friend returned from Chiapas and said, “I have a surprise for you. It’s a photo taken in the 1970’s and it’s what that artist must have based that painting on, the one you used in the ad.”

She showed me the photo on her laptop and sure enough it was almost exactly like the painting by Yepes. The face of the man in the black hat was different; it was not that of Keith Richards, nor was there a crown of thorns. But almost everything else was exactly the same, except that Yepes had added religious and pop iconography.

“Where is this from?” I asked.

“A place called Na Bolom, in San Cristóbal de las Casas,” she said. “And mezcal figures into the story. So does Guatemala.” (See sidebar on Na Bolom)

“Not a chance,” she said, “You’ve gotta go there and find out yourself.”

I went to my tequila bar; it seemed like the right place to contemplate these matters.

It was early afternoon, and the bar was dark and empty. It was time to make a trip indeed. I poured myself a shot mezcal and sipped it slowly, thinking about how much I love crossing the border into Mexico. It never ceases to amaze me how the entire world changes by just passing a few meters of dirt; how suddenly the land seems to open its arms; how reds and greens and yellow seem to fly at you; how smoke and chiles waft from the food stalls. . . . In Mexico laid-back has a mad pace and rhythm; centuries seem to kaleidoscope in and out of each other as life and death dance in the same space . . . .  It dawned on me – by no means for the first time — that my love affair with mezcal and tequila is as much a love affair with Mexico herself.

I also began to ponder the title of the painting – Soy Ilegal. Was Yepes making the comment that Mexicans and Mexico have been persecuted, and that there would be a defiant resurrection? That the defiant resurrection was taking place? Was this painting in part a statement regarding the “illegal” immigration of Mexicans into the United States, ironically across the border into places like Texas, California, and Arizona which had once been parts of Mexico? Was he talking about himself, an ex-gang member and lone-wolf artist, playing the game according to his own rules?  Was Keith Richard’s likeness used because he represented rebelliousness and resilience and had defied the odds? And what was the relation of the photo to all this?

Three weeks later a friend and I hopped in a truck and headed north towards the agave filled mountains and pink skies. First stop was Oaxaca where some mezcal was being made for us in a Zapotec village at the foot of the Sierra Madre del Sur mountains, appropriately named, Tlacolula.  I say appropriately because the rough English translation for the Zapotec word is “twisted” – our ILEGAL-MEZCAL comes from the twisted pueblo – I liked that. (The long strange trip from Keith Richards to George Yepes to the discovery of the photo already had the perchance windings of a month long bender.)

We then drove 12 hours south to San Cristobal de las Casas, Chiapas. During the long ride I reminded myself I had to contact Yepes and inquire as to the connection between the painting and photo.

The following afternoon we walked through the doors of Casa Na Bolom to inquire about the photo.