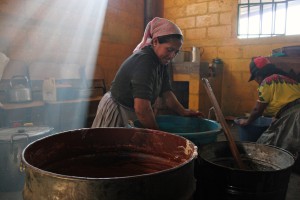 When Glamis Gold began constructing its $254 million open-pit gold and silver mine in Guatemala’s Western Highlands in 2004, the company promised residents in the Department of San Marcos jobs, schools and other social projects, in exchange for letting it extract precious metals. But a few years later, Elida Lopez Tojil, a lifelong resident of Sipacapa, says she has seen only contamination from the mine, though it is not lost on her that the Marlin project earned Goldcorp, the Canadian firm that bought Glamis in 2006, $72.8 million last year alone.

“When they first came here, they said they were going to give us training, give us jobs,” says Lopez Tojil, who runs a restaurant in Sipacapa, a small town connected to the rest of the world by pitted dirt roads. “But we haven’t seen any benefit . . . only contamination.”

Lopez Tojil fears that the mine and the chemicals it is using may have damaged the region’s main means of subsistence – agriculture. Recently, peach and other fruit trees have been less productive, she says. “We don’t know why, but there’s less fruit. This is the land of avocados, but there aren’t good avocados anymore.”

Lopez Tojil also worries that the mine – which uses cyanide to leach gold and silver ore from unearthed soil – might be contaminating the food she serves to her customers and family. Produce from Tres Cruces, San Isidro and other villages close to the mine is sold at the Sipacapa market.

“I’m buying [vegetables] with distrust . . . I don’t feel sure that they’re clean,” she says. ”It worries me that [the company is] taking all the flowers from the earth, all the riches. And us, what are we going to eat?”

Lopez Tojil’s fears appear justified. Two organizations have recently found that the mine may be contaminating nearby rivers and creating water shortages for villagers. The Latin American Water Tribunal, an international environmental justice organization, found after a review of the Marlin project in September that Montana Exploradora, S.A. (the local subsidiary of Goldcorp) has damaged the environment in the two municipalities of San Miguel Ixtahuacan, where the majority of the mine is located, as well as Sipacapa.

Weeks later, the Pastoral Commission Peace and Ecology (COPAE) of San Marcos presented a report to the media, the Ministry of Environment and Natural Resources (MARN), and the Union of Mines (Gremial de Minas) that did little to assuage local fears. The study contained the results of a year’s worth of monitoring local rivers and streams. Their analysis was sobering.

COPAE recorded the temperature, pH levels and electrical conductivity of the water at five points every month. Tests were also conducted to determine the presence of various heavy metals and chemicals, including iron, aluminum, manganese and arsenic. These substances, while naturally occurring, can foul groundwater when they are separated during the mining process.

Of great concern to COPAE was the discovery that arsenic levels found in the Quivichil stream, located below Marlin’s center of operations, had increased markedly over a period of months in 2008. According to their study, arsenic levels in the stream exceeded what is considered safe by Guatemala’s Ministry of Environment, the Canadian government, the World Bank, and the United States Environmental Protection Agency. “The presence of arsenic in the waters of the Quivichil stream is alarming and worrying,” the report states.

The World Health Organization has found that long-term exposure to arsenic can cause several kinds of cancers and a severe blood disease, and increase the risk for heart disease, diabetes and reproductive defects. Rashes and skin infections, which COPAE staff say have been afflicting residents in San Miguel since the project began, are a common short-term effect.

Fausto Valiente, COPAE’s agronomic engineer who worked on the study, says that the results of the monitoring are “an alert for the population” in San Miguel and Sipacapa that it is possible their water is being contaminated. Valiente says that COPAE’s results are not those of an independent, accredited lab and that more rigorous testing, over a longer period of time, is needed.

“What we want is to at least have immediate results made for ourselves and . . . to know if contamination exists or not,” said Valiente, adding that COPAE will continue monitoring water around the mine. The report is also intended as a push to the MARN to “do their job,” Valiente said, by monitoring the practices and impacts of the mine more closely.

The report yielded some success on Oct. 1, when Luis Ferrate, Minister of the Environment and Natural Resources, Douglas Gonzalez, the manager of the Union of Guatemalan Mines, and Bishop Alvaro Ramazzini, of the Diocesis of San Marcos, agreed to regularly monitor the rivers and water sources around Marlin, according to an Oct. 2 article in Prensa Libre. Still, Valiente said, monitoring by an independent lab would be best.

Representatives from Goldcorp have refused to comment for this story, but the company’s 2007 monitoring report for Marlin says water testing by the Asociacion de Monitoreo Ambiental Comunitorio (an independent group set up to monitor water quality) shows that water quality complied with Guatemalan and World Bank standards.

The Marlin Mine has been controversial since it was first proposed in the late 1990s. Guatemala gave Glamis a 25-year exploitation license in 2003 and construction began in May 2004. The following month, the International Finance Corporation – the arm of the World Bank Group that funds private-sector projects – backed the Marlin project with a $45 million loan. The company bought roughly 8 square kilometers of land from more than 250 owners, paying 4,000 quetzales per cuedra (or $4,671 per acre), according to Goldcorp documents. The company has since bought more land as a buffer.

Most of the mine, 85 percent, is located in San Miguel Ixtahuacan. The rest of the mine is in Sipacapa, where the strongest opposition has come from. On June 18, 2005, Sipacapa held a consulta – or referendum – on the mining project. Of the 13 villages in Sipacapa municipality, 11 voted against mining, one voted for, and the other abstained. But the consulta was never honored. Glamis and the Ministry of Energy and Mines challenged the vote as unconstitutional. Although the court was critical of the company and the government in its decision, it ruled that the consulta was not binding because the authority to regulate mining belonged to the Ministry of Energy and Mines, not the municipality, according to a 2007 article in the University of Toronto’s Indigenous Law Journal.

Today, most of Sipacapa is still strongly opposed to Marlin’s presence in their municipality, people there say. “[We] don’t want to talk, [we] don’t want to negotiate,” says Oracio Perez Perez, a teacher in Sipacapa. The people of Sipacapa are unique, he says, with a long history of resistance and cultural preservation. “We are a people who maintain our unity.” However, in San Miguel, he says the population initially agreed to the project because they knew it would bring them a new road. Now, however, “people  there are divided,” he said.

Health-wise, one of the biggest concerns about the mine is the fact that it uses cyanide leaching. The same lethal chemical used in gas chambers, cyanide is highly toxic and can poison people through inhalation, ingestion or skin or eye contact. Despite its toxicity, cyanide is useful to the mining industry because it makes it possible to glean gold and silver from land with low grades of ore, according to an article posted on the Mining Watch Canada website written by Robert Moran, a hydrologist and geochemist from the US-based Mineral Policy Center.

According to the International Cyanide Management Institute, gold and silver are generally found only at very low concentrations in ores. Because of this, chemical processes are the only economically viable way to extract the precious metals. When cyanide is mixed with water and then used to wash the extracted ore it bonds with tiny particles of gold and silver, separating them from the other components of the ore. Then a secondary chemical process is used to separate the cyanide from the gold and silver. The cyanide cannot be reused and must be treated as waste. The mine operators are then expected to make the cyanide inert before dumping it into local streams and rivers.

Along with the potential for cyanide pollution reaching the local community, the process requires vast quantities of water, creating competition in communities around mines, especially in areas used primarily for agriculture. COPAE’s recent report cites that Marlin uses 250,000 liters of water per hour to operate the mine – the same amount of water used by a local family in 22 years. Perez Perez, the teacher in Sipacapa, says that some springs have dried, pushing residents to look for water in neighboring areas. Lopez Tojil, the restaurant owner, says that a couple of months ago Sipacapa went without water for three days, after people in Chual – where Sipacapa’s water comes from, and where she says water levels have been waning – cut off the supply as a pressure to force out Fundación Sierra Madre, a foundation created by Goldcorp.