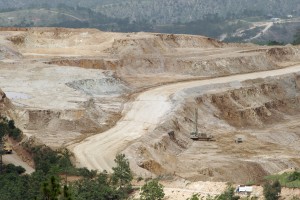 But Marlin has been remarkably profitable for Goldcorp, which bought out Glamis in November 2006 and soon thereafter paid back the loan, ending the IFC’s involvement in the project. In 2007, Goldcorp mined 227,200 ounces of gold and 2.9 million ounces of silver from the mine, for almost $204 million in revenues and $72.8 million in profits, according to its 2008 annual report. In 2006, the company made $36.4 million from the operation. Based on the company’s agreement with the government of Guatemala, 1 percent of these proceeds stay in the country – half a percent is given to the municipality while the other half is paid to the Guatemalan government.

The chief benefit of the project for local people is employment of unskilled labor, while tax payment is the chief benefit both locally and nationally, according to Jamie Kneen, communications and outreach coordinator at MiningWatch Canada.

According to the Goldcorp documents, the company has paid $3.2 million in royalties on the mine so far and $17 million in taxes. As of last December, according to Goldcorp’s annual report, the Marlin Mine had employed 1,149 workers, more than half of whom came from San Miguel, 12 percent of whom came from Sipacapa, and 31 percent from the rest of Guatemala. Another 1 percent of the employees were foreigners.

However, several other Goldcorp documents report a much lower employment figure of 160 locals for the mine’s operation at any given time.

Kneen added, however, that the social costs of the project have been, and will continue to be, extremely high.

“Even after the mine closes it will take years for the social conflict it has generated to die down, and it could take centuries – or forever – for the environmental impacts to fade,” Kneen wrote.

In its annual report, Goldcorp portrays itself as a model citizen, saying it is committed to responsible mining. Regarding the Marlin project, the company states, ”Goldcorp’s Marlin mine in Guatemala, along with the Citizen’s Development Corps, has created the Fundación Sierra Madre to initiate sustainable development and capacity building programs in the local communities surrounding the project, with the goal of facilitating locally based development that will continue well beyond the life of the mine itself. The foundation has been very active constructing, improving or supporting health clinics, banks, school projects, bridges, and water delivery systems.” In documents, the company says it paid $10.8 million in workers salaries last year, including the salaries of 37 teachers. It also boasts that school enrollment has jumped in every community near the mine since 2002.

Hannfried von Hindenburg, senior communications officer in the IFC/World Bank Oil, Gas, Mining and Chemicals Department, said by telephone that the IFC became involved in the Marlin project because the Guatemalan government had an interest in exploiting the natural resources of the highlands.  Although the IFC hasn’t been involved in the Marlin mine for more than a year and a half, von Hindenburg said that Glamis “did fulfill its promise.”

Von Hindenburg made it clear that he understood the Marlin project had experienced opposition, particularly from the residents of Sipacapa, but noted that the community initially supported the creation of the mine and the opportunities they hoped it would bring. He said that during the time of their involvement the IFC had worked with opposition leaders in order to find solutions to their problems. He noted that, “Mining is one way, not the only way” to economically develop Guatemala’s western highlands, though he admitted that projects in the mining sector account for only 3% of the IFC’s development portfolio.

Kneen, of MiningWatch, disputes the potential of mining projects to create sustainable development. “Minerals are non-renewable resources. . . . The best to be hoped for from mining is that it does as little damage as possible to the possibility of sustainable development. . . . However, environmental damage can be minimized by insisting on strict regulation and monitoring, as opposed to allowing the company to refuse access to government inspectors, and social conflicts can be minimized by respecting the Peace Accord commitments to consult with affected communities prior to any development, and conceivably even implementing requirements for Free Prior Informed Consent.”

Tim Miller, Goldcorp’s vice president for Central and South America, refused to answer specific questions about the Marlin mine. In an e-mail, Miller wrote, ”We are very proud of the excellent environmental and social record we have been able to achieve at our mine in Guatemala. I’m not sure how ‘controversial’ Marlin is, as much as being the target of some rather unscrupulous anti-development advocacy groups . . . We feel that at this time, out of respect for the people of the local communities and our workforce, that it is not appropriate to continually re-state what has been amply reported on.”

But Johanna van Strien, who works with COPAE in San Marcos, says that social clashes are one of the most serious impacts to have come out of the Marlin project so far. While in Sipacapa the vast majority of residents are united in their opposition to the mine, the population in San Miguel, where most of the mine is situated, is far more divided. Van Strien says this is in large part because there are more jobs at the mine for San Miguel residents – though not enough for everyone – and also because Marlin security has a larger presence there.

Disagreement and tension over the mine, violence and threats have “completely disintegrated the communities” in San Miguel, she says, even creating divisions within individual families. In addition, the presence of private security guards, and in some cases members of the Guatemalan military, has not only militarized the culture in the community, but contributed to the “criminalization of the social protest,” says van Strien.