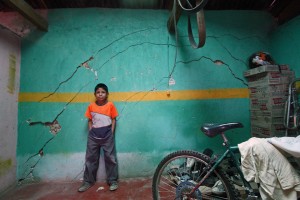 In addition to social turmoil and health concerns, about 100 homes near the mine have developed cracks in their walls since the Marlin project began, van Strein said. While COPAE can’t directly prove the connection, their engineer suspects that this damage is from dynamite explosions at the mine, she said.

Given these problems – plus longer-term concerns like the possibility of acid drainage in the community years after the mine has closed – the Marlin project is “not an integral form of development,” says van Strien. “A job for 4 or 5 years is a very short-term benefit,” she said.

Von Hindenburg of the IFC acknowledges that projects like the Marlin mine can disrupt local communities. “It’s difficult and intrusive to build a mine in a poor area of any country,” he said. “Inevitably there will be a certain amount of conflict.”

Von Hindenburg also suggests that competing special interests can surface when large projects – and with them higher visibility and economic opportunity – enter into communities. While mining projects do impact the social fabric, community opposition to the project isn’t always about the mine, he says.

Marlin will ultimately lead to sustainable development if it can act as a catalyst to other economic ventures that are not dependent on the presence of the mine, von Hinderburg said.

“The hope is that you create a diversified economy” that will outlive the mining project, he said.

But to Lopez Tojil, the restaurant owner, the potential for development from the mine isn’t worth the risks it poses to her community.

“Some people say, ‘Why don’t you take advantage of the projects they’re offering?'” she says. “I’m not going to sell myself for a small gift if what’s at stake is the health of myself and my family.”

Elizabeth Tomei and Joe Tarr are freelance journalists from the United States. They have worked around the world, most recently in  Central America and South East Asia. They can be reached at lizzytomei@gmail.com or joe@joetarr.com

James Rodriguez, a citizen of both Mexico and the United States, is currently living and working in Guatemala City. To see more of his Sipacapa photos, and much more work, visit www.mimundo.org and stay tuned for future issues of La Cuadra.