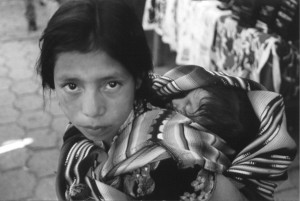 When we got our daughter’s paperwork, Walter and I noticed that her first, middle, and last names were exactly the same as her mother’s. We told ourselves this was probably because the adoption lawyer had suggested it-an efficient decision made for the sake of checkups and court appearances. I’d read that some adoptees believe their given name is a precious connection to their heritage. When we asked our social worker what she thought about changing it, she said it was up to us to decide what was right for our family. So we changed her first name to Flora and made Beatriz her middle name.

We did not, however, want Flora’s life before us to be irretrievable, so we asked if Beatriz wanted to meet us and stay in touch. Our social worker contacted the lawyer in Guatemala, who replied that Beatriz “would love to know us.” Then, a week before our trip, the social worker called and said there would be no meeting; Beatriz had gone back to her village and wasn’t reachable.

“But she’s from Guatemala City,” I said. “Do you think the lawyer is telling us the truth?” The social worker said it was hard to know. Adoptions in Guatemala are arranged entirely by private lawyers, without oversight from any central authority, and corruption is widespread. Our agency promised it carefully screened those it worked with in Guatemala. But this incident gave us pause. The lawyer might technically be representing both Flora and us, but whose interests was he really looking out for?

A week later, we flew to Guatemala City. The hotel of choice for American adoptive parents is the Marriott, which is so used to these “pickup” trips, it offers strollers for rent and has arranged with a nearby pharmacy to deliver formula and diapers to panicky new parents. Via chat rooms, adoptive parents with similar pick-up trip schedules make arrangements to connect at the Marriott. But the idea of all that camaraderie just heightened my anxiety. So we stayed at the Westin.

As the elevator chugged down toward the lobby, Walter pointed the video camera at me and said, “Here’s Mommy waiting to see Flora for the first time!” I forced a feeble smile. I was naked and sweating when I met my sons in the sterile glow of a hospital birthing room. Now I stepped out onto rose-marble floors to face Flora’s foster mother Maria, a stout woman with a six-month-old girl riding at her hip in a woven sling. As they cuddled and laughed-later I’d look at photos of this moment to remind myself that Flora could laugh; for weeks her eyes grazed her new home with a dull blankness-my heart sank.

Our lawyer was, to our surprise, not present. My limited Spanish had drained from my memory, but somehow I managed to ask Maria to walk with us to the hotel’s business center so that we could hire a translator. On our way, a gray-haired man in a suit stopped to shake Maria’s hand. Later she told me he was an adoption lawyer; he owed her four months’ salary that she knew would never be paid.

The woman who ran the business center was feeding documents into a fax machine when we blew into her office. On seeing Flora, she rose and shook hands with Walter and me. Then she nodded at Maria. I told her I needed to ask Maria a few questions: What time did Flora go to bed? How often did she nap? Did she eat solid foods?

She dutifully repeated my questions, but after Maria answered, she paused.

“She wasn’t told that this was your pickup trip,” the translator told us. “She thought you were only visiting.”

Tears streaked down Maria’s cheeks as she adjusted the stroller’s back to show us that Flora liked to take her bottle lying on her back. Then, her voice catching, she recited the prayer Flora fell asleep to every night, crossing herself as she whispered. She explained that she and her husband tried to prepare themselves to say goodbye, but it was always hard. We asked her to join us for lunch in our room and she stayed until eight that evening; I’m still not sure how we found the words and gestures to communicate.

When I asked Maria if she knew Beatriz, she smiled. “Muy linda,” she said. “Muy cariñosa.” Very lovely. Very affectionate. That last word opened up a hopeful possibility: Had Beatriz been able to spend time with Flora? The agency hadn’t been able to tell us, and the lawyer’s office claimed Beatriz didn’t have a phone.

Maria looked puzzled when I told her this. Then she held up her cell phone and gestured that Beatriz’s number was stored in her speed dial.

“Would she want to meet us?” I asked.

Maria shook her head. I think she said that it would be too painful for Beatriz.

I looked at Flora gumming a french fry. Maria had styled her hair so that two tiny ponytails stuck out atop her head like miniature oil geysers. Somewhere, a woman was coming to terms with the fact that she would never see her baby again.

Maria called on Flora’s first birthday to say that Beatriz wanted us to know she felt she had made the right decision. A few weeks later, our social worker told us that Beatriz had visited the lawyer and wanted to see photos of her daughter.

Several months later, Maria called again. The lawyer had threatened to fire her if she continued to contact us.

That night I was changing Flora’s diaper. “Who’s my girl?” I sang as I pulled the tab taut across her stomach. She pointed at her chest and laughed, her dimples creasing into pinholes. Then she reached up to tickle my chin. “Flora Beatriz,” I cooed. “You are one beautiful kid.” Hearing myself say her middle name took me aback. Beatriz, I suddenly realized, had chosen it, the only connection to their brief life together.

And that’s when it finally sank in: Beatriz hadn’t made a “choice” in the liberating way that our post-Roe culture thinks about reproductive options. Like any woman in the developing world placing a child for adoption, she’d buckled under crushing financial or social pressure-perhaps even coercion. I’d considered this before, but had always batted the thought away by telling myself that Flora was going to be adopted, whether it was we who stepped forward or someone else.

Walter walked in, flushed and sweating from wrestling with the boys, who were now happily digging into bowls of applesauce.

His smile fell as he saw me crying.

“Did something happen today?”

“I think Beatriz wants us to find her,” was all I could say.