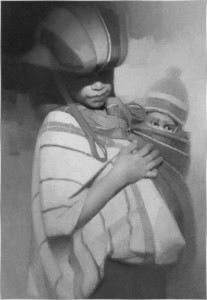 Is it ethical for an adoptive parent to push for information about her child’s birth family? Or should that be a decision left to the adoptee? And what about the birth family’s right to privacy? “You can’t compare an open adoption in the U.S. with an open adoption process internationally,” says Susan Soon keum Cox, vice president of public policy at Holt International, an Oregon adoption agency whose founders launched transnational adoptions in the United States. The child of a Korean woman and a British soldier, Cox, who was adopted in 1956, found her Korean half brothers when she was an adult. Yet she cautions against too-hasty birth family searches. “The stigma of adoption in many countries is still very powerful and very real. Women place their children for adoption and slip back into society. It’s a very different thing than the acceptance of single parents and adoption in the U.S.” In China, currently the greatest source of transnational adoptees-6,493 U.S. “orphan” visas were issued to Chinese adoptees in 2006-relinquishing a child is illegal, and families sometimes abandon their children to avoid running afoul of the one-child policy; birth mothers found to have done this can face prosecution.

While there is no simple way to track down Chinese birth families right now, voluntary dna data banks might one day help people find relatives. (A database developed by the University of California-Berkeley’s Human Rights Center is already connecting children stolen during El Salvador’s civil war with their families.) “China will be a different China in 10 years,” says McGinnis. “Just as Korea is not the same Korea it was in the 1970s.” A Dutch family recently traveled to the Chinese town where their daughter was born; they talked to the media, a couple came forward, and dna tests confirmed that they were the girl’s parents.

Some of these reunions could turn out to be unsettling. “One of the ways that wrongdoers hide their child-laundering schemes is by the closed-adoption system,” says David Smolin, a law professor who’s written extensively on corruption in transnational adoption.

He and his wife adopted two sisters from India only to find out that they had been stolen from their birth family. Last March, a Utah adoption agency was indicted in an alleged fraud scheme involving 81 Samoan children whose parents were told that they were sending their children away to take advantage of opportunities in the United States-that there would be letters, photos, and visits, and that the children would return when they turned 18.

Openness, Smolin notes, would also make it harder for parents to think of adoptions as “rescuing” children. “There are cultural reasons why people give up children for adoption,” he says. “But when you have a situation where money alone, in relatively small quantities, would allow the birth family to keep the child-under current law you are allowed to take the child and spend $30,000 when $200 would be enough to avoid the relinquishment.”

As it stands, families who have forged relationships with birth parents often find it impossible to turn their backs on their economic needs.

Some send a monthly stipend; others pay for the education of their child’s siblings, help finance businesses, or buy computers or cell phones to make it easier to stay in touch. And while all this is legal once the adoption is finalized, it’s a lot messier than writing a check for Save the Children. “We need to be careful what kind of impression that makes with other people in the village or area,” says Linh Song, the president of Ethica, a nonprofit organization that advocates for transparent adoptions worldwide. “Will they receive aid if their child is sent abroad?”

I was working on deadline the afternoon Veronika’s email flashed on my screen, a month after we had hired her to find Beatriz. Operating by word of mouth, Veronika has done hundreds of searches for birth families in Guatemala and elsewhere in Central America. In 1999, when she first considered this line of work, “I asked my friends and they all said, ‘No, don’t get involved in that.’ People here see adoptions only as a business. A big business. And when there is a lot of money involved, there is corruption.”

Still, the idea of connecting families appealed to her. Her first search was easy. “I knocked on the door of the address I was given by the adoptive family and the birth mother opened the door.” Soon, though, she got threats: Stop, or you’ll get into trouble. Her husband accompanies her on every search; she will not contact anyone who works directly with adoptions, or discuss the details of a search.

Her email relieved us of two worries: Beatriz had been hoping we would find her, and she had not been coerced into placing Flora for adoption. She thanked us for making it possible to watch her child grow up. She missed her, prayed for her, and wanted Flora to know that not a day passed when she didn’t think about her. She said that before the adoption she was a bubbly person. Now she kept mostly to herself.

I’d nurtured a vague notion of a faraway woman grieving for her lost child. But as soon as an image of Beatriz sobbing into her pillow materialized, my brain concocted a counter-narrative, a story in which she was healing from her loss. A story in which not having to raise the child I tucked into bed every night freed Beatriz in some way.

Then one evening not long after the email arrived, Walter and I spent our date night at a reading of Outsiders Within: Writing on Transracial Adoption, an anthology that is a stirring and stern rebuke to the standard heartwarming adoption narrative. Back in our car, Walter bowed his head.

“We should give her back,” he said.

I’d harbored the same thought, but the anguish on his face threatened me enough to push back.

“Why not?” he countered. “It wouldn’t take much money to support them.”

“Because we are her family.”

“How do you know that?” It was an unconvincing dodge. We were friends with several families who had adopted toddlers; their kids were thriving. “How could we do that to the boys?” I insisted.

“And how could we do that to us? I couldn’t live with that pain.”

“But why should Beatriz have to?” he asked.

To most Americans, Flora’s adoption is measured entirely by what she gains-Montessori schools, soccer camps, piano lessons, college. But it no longer quite computes that way for me. To gain a family, my daughter had to lose a family. To become an American child, she had to stop being a Guatemalan child.

McGinnis told me that because adoptive parents are put through such a rigmarole of assessments and trainings, it’s easy for them to jump on the “super-parent track” in the quest to raise a happy child. “If ‘adoptees want to know their past’ becomes another item on the super-parent track, it’s important to understand whether you are doing a search because you don’t want your child to be mad at you later,” she says. “My research has shown what makes a healthy identity is when the adopted person feels like they have a chance to make decisions.”

Walter and I are nothing if not grade-grubbing students in the super-parent classroom. We have a babysitter who is from Guatemala and speaks only Spanish with our children. She cooks us pepian and invites us for tamales with her family, which likes my trés leches cake. A jade statue of a Mayan corn goddess stands on our living room shelf, and a woven huipil hangs in the hall. We send the boys to a summer camp for children adopted from Latin America and their siblings, and get together once a month with other families with Guatemalan children. From the moment we met Flora, we planned on visiting Guatemala every few years.

Which is all very well-but the results can sometimes feel like a trip to Epcot. Perhaps one day Flora will appreciate our efforts; maybe she will resent them. I hope that if she rolls her eyes at our jaguar masks and woven placemats, I’ll be able to smile. But what if the decision she most resents is the one we can’t rescind? You can’t exactly put a birth family back into a drawer.