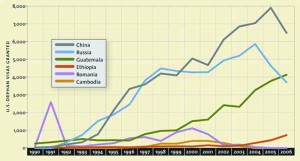 By the time we returned to Guatemala City, Flora was two and a half. Walter and I had decided it would be easier for her to meet Beatriz this young; as she grew up, she and Beatriz would figure out what they wanted from their relationship. But it was an uneasy compromise. Unlike our domestic counterparts, we didn’t have the benefit of longitudinal studies and books detailing best practices. We didn’t even really have an open adoption. There was no legal document to set out the terms of contact, only a tendril of trust spun from the fact that Beatriz, Walter, and I all loved the same child.

The day before we met Beatriz, I asked Veronika what it was like for Guatemalan mothers to see their child with another set of parents.

“I think it gives them peace,” she replied. “They feel, ‘I am dark-skinned. I am a woman. I have no education. I gave him away. I am worthless.’ They think about this child every day, but they feel like they have no right to that child. [After a reunion], they understand that they are being given the opportunity to have a relationship and that they deserve it.”

And what about the adoptees? “The most important thing for the adopted child is to know that they weren’t given up because they weren’t loved,” she said. “It is so obvious to me that they are deeply, deeply loved by their birth mothers.”

Veronika had decided we should meet Beatriz at McDonald’s because it would afford us some anonymity. It turned out to be the perfect setting for Flora, no stranger to the pleasures of McNuggets and giant sliding tubes. In the lunchtime rush, few looked up from their Big Macs to wonder why a blond gringa and a petite Guatemalan were clinging to each other and weeping.

When you meet your daughter’s mother, you don’t waste time with small talk. And at first, there was no need for talking because Beatriz could not take her eyes off Flora.

Flora frowned and turned away. “I want Daddy,” she said.

Walter picked her up and kissed her cheek. “Sweetie,” he said. “This is Beatriz. She’s your Guatemalan mommy.” Flora buried her face in his shoulder. Nervously, we tried to draw her out. But Beatriz told us not to worry.

With Veronika translating, Beatriz told us that she was deeply depressed for a year after the adoption was finalized. She got through her pain by turning to God. She loved being in the hospital with Flora and demanded as a condition of the adoption that she could visit her in foster care. She assumed that she would never see Flora again and she was still in shock that she had. She took obvious delight in how healthy and happy Flora was. She told us the names of all of Flora’s relatives and explained that Flora gets her dimples from her uncle.

Somewhere along the way Flora smiled at Beatriz and lobbed a Happy Meal Furby toy onto the table. Beatriz laughed.

“She likes to play boy games with her brothers,” I continued. Flora was dressed for the occasion in a freshly ironed dress and white patent-leather sandals; I’d even had her ears pierced so she would look like other Guatemalan girls.

“She doesn’t like dresses,” I continued. “She prefers pants.”

“And she is very attached to Walter.”

“That’s just like me, too!” she continued. “I loved my father more than anyone.”

As if on cue, Flora pooped and would only allow Walter to change her diaper. As he grabbed the wipes and trudged off to the men’s room, Beatriz and Veronika looked at each other. “We train the men differently in the United States,” I said.

Then I blurted it out, sobbing. “I’m sorry we changed her name.”

“Don’t worry,” Beatriz said. “You’ve given me more than I could ever have imagined.” Her gratitude was unsettling, unnecessary, overwhelming.

Many adoptive parents describe their connection with their children as something that was destined by a larger force. “God brought us to each other,” they’ll say. “We were meant to be a family.” I understand why we want to think that, but the reality is, Flora is my child because something went wrong. To believe otherwise would mean that God intended for Beatriz to suffer because she couldn’t afford to raise her child, that we were meant to have the option of adding a girl to our family because we could afford the price.

At the end of our third hour together, all of us-save Flora-looked shell shocked, but no one wanted to leave. Beatriz asked if I worked. I said I was a journalist and that one day I hoped to write about women in Guatemala and other countries who place their children for adoption. I told her that we don’t hear much about these mothers.

Beatriz nodded. “Please write about me,” she said. “Please tell the Americans how much I love my daughter.”

So what will Flora make of that day, much less this article? I have no idea. But I think a lot about what Hollee McGinnis told me about her Korean family. “Adoptees have to ultimately figure out what it means that they were adopted,” she said. “Yes, they can go and ask some questions, but the meaning-making will be theirs. Openness is really good in that you don’t have to jump through all these extra hurdles. But the work of figuring it out is still there.”

Loving an adopted child is easy. In fact, Flora’s adoption was in some astonishing way more powerful than giving birth to my sons. To fall so deeply for a daughter who has no genetic link to me made me realize that we are simply hardwired to love the children we are given to raise.

Raising an adopted child is, however, a complicated privilege. Walter and I could not turn our backs on Beatriz’s poverty. After trying unsuccessfully to find a nonprofit that would help us sponsor her somehow, we finally decided to just send her money through Veronika so she could finish her education. Could this encourage women in her neighborhood to place a child for adoption? Could we possibly not do it?

What I do know is that I have never felt more like Flora’s “real” mother than when Beatriz and I were holding each other next to Ronald McDonald. And that’s not because Flora so obviously saw me as her mommy. It’s because I now understand I’m not her only one.

This story is reprinted with permission from the American Magazine, Mother Jones © 2007, Foundation for National Progress.