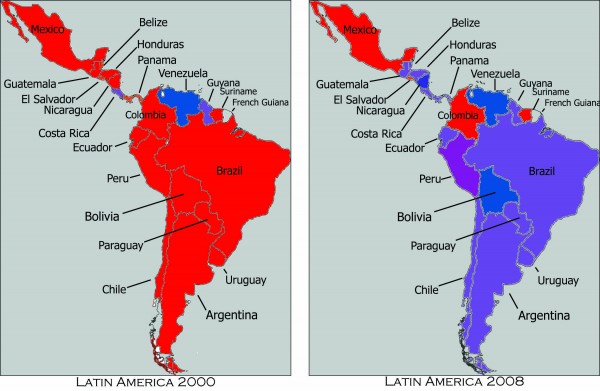 The END OF ‘CONSENSUS’

The current progressive political waves have signaled a cooling shoulder to the U.S., not just as a heavy-leaning “big brother,” but also for its conspicuous economic dogma – long enforced by monetary loans and guns – known as the “Washington Consensus.” The primary problem with the Washington Consensus, however, is that there never has been any consensus at all, even within the United States.

The strings attached to loans required debtor nations to conform in broad strokes to the “small government” economic doctrine of the U.S. Republican Party’s so-called “supply-side” economics – which insists that the less a government taxes and does, the more wealth is retained by the wealthy, thus the more they will invest in the economy. To impose this doctrine, terms of the loans required that recipient regimes embark on programs of trade liberalization and government divestiture (hence “neoliberal”) and “fiscal discipline”: slashing taxes on the wealthy, lowering tariffs, privatization of state-owned industries, canonization of “property rights,” bailing out corporations while gutting agrarian subsidies, and eliminating social spending.

Adopted as unimpeachable dogma by America’s economic elite, this orthodoxy became an austere, counterintuitive religion to be spread via missionaries from U.S. fiscal subsidiaries such as the International Monetary Fund (IMF), the World Bank and the Inter-American Development Bank, who in many cases took de facto control of debtor economies. These institutions, as a result, became less economic relief and lending institutions, as they have always insisted, and more policy-making arms of the U.S. government.

The second and weightier problem with the Washington Consensus is that its underlying theory doesn’t work in the real world. In a nutshell, the supply-side theory conflates “economic liberty” with the wishful thinking that increased investments by an unencumbered capital class will create more jobs, thus effecting a mythical “rising tide that lifts all boats.” But Latin America found out that simply enabling the capital classes to do whatever they wish – per the old “laissez faire” canard – does more harm than good.

The “globalization” aspect of the loans, effectively lowering economic borders, gave carte blanche to local elites to merely shunt investments out of target countries more easily. Those U.S. loans that were used in-country often went to hire U.S. or European corporations, or their subsidiary local front companies, to assume the roles of privatized industries, thus sending a bulk of the profits northward anyway. Prior to the “Blue Shift,” big corporations’ Latin American business partners also often occupied presidential palaces and assemblies, which nurtured cultures of caprice, cronyism and corruption, with politicians unaccountable to the welling needs of the majority.

As the capital classes’ windfalls came in inverse proportion to the government’s falling tax coffers, the IMF/World Bank loan officers insisted that the client states cast off their domestic infrastructure and social programs, such as medicine, education, business regulation and labor protection.

As a result, the Washington Consensus did little but deepen the already gross chasm between rich and poor in Latin America. Nearly every U.S. presidential administration since the end of World War II has rationalized their alliances with Latin American dictators as the defense of “economic liberty,” tacitly acknowledging (and allowing) that this comes at the expense of political and social liberty. This occurred most infamously when the father of supply-side economic theory and right-wing icon Milton Friedman allied with Chilean fascist strongman Augusto Pinochet, to use Chile as an economic Petri dish, with stereotypical results.

Even amid Pinochet’s disappearing of some 30,000 citizens, Friedman’s Chilean “economic miracle” yielded a growth in the country’s poverty rate from 17% in 1970, when Salvador Allende,  the elected President whom Pinochet overthrew with U.S. assistance was elected, to 35% in 1990, with the poorest 50% of the population’s share of national income declining from 20.4% to 16.8% and the share of wealthiest 10% increasing from 36.6% to 46.8% – arguably, just as planned.

When the Reagan administration turned up the heat on the Cold War in Latin America – killing upwards of 300,000 people in a series of illegal wars-by-proxy in Central America alone – things got even worse. From 1980-2000, per capita GDP grew an anemic 9% throughout Latin America. This growth was unable to offset the increasing numbers of those living in poverty – a population that, according to the  U.N. Special Economic Commission for Latin America and the Caribbean, exploded from 136 million in 1980 to 205 million last year.

Reagan’s wars and heavy bankrolling of right-wing regimes suppressed popular movements against this inequitable status quo, but they became cause to inevitable effect. That is, by simply beating down dissent and making change impossible, the U.S. only worsened the conditions and assured further discontent, enabling a system of government that, shed of any civic responsibility to its people, did little other than marshal armies.

The Washington Consensus “was relatively blind to the importance of governance and the role of the state,” Mark L. Schneider, senior V.P. at the Brussels-based NGO the International Crisis Group, told Latin American Studies Annual Conference in Montreal last September. “Without effective, inclusive and accountable governance . . . inevitably some of the measures produced losers as well as winners, and the poor and the most vulnerable always tended to be the losers . . . [T]he consequences exacerbated a sense of exclusion and alienation of growing segments of the population.”

John Kennedy famously said, “Those who make peaceful revolution impossible make violent revolution inevitable.” A contemporary corollary now at play in Latin America would suggest that those who suppressed revolution violently might not fare so well once their actions are measured by an honest vote.