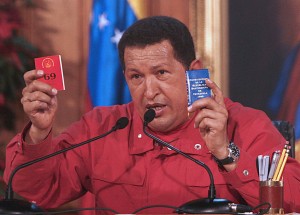 Even as these monetary chains were being cut, perhaps the most devastating single public blow to U.S. primacy in the region occurred in 2005, at the Summit of the Americas in Mar del Plata, Argentina. Bush arrived to thousand of protesters, led by football superstar Maradona, decrying the U.S. president’s war in Iraq, his administration’s sanctioning the torture of prisoners, and, closer to home, his plan for the Free Trade Agreement of the Americas. Neoliberals envisioned the FTAA as a hemispheric expansion of NAFTA, the North American Free Trade Agreement, which had devastated both the industrial economy of the U.S. and the agrarian economy of Mexico, the first nation to which many U.S. corporations moved manufacturing facilities for cheap, unregulated labor. While 29 other nations signed onto the pact, five refused – but those five accounted for over half the economic activity and population of the continent: Brazil, Argentina, Venezuela, Uruguay and Paraguay. In addition to Bush’s public relations black eye with all Latin America watching, and Chávez adding actual insults to injury at the event, the FTAA went down in flames, smelling too much, by the dissenters’ estimates, of an attempt to revert back to the bad old days under another guise. In Chavez’ words, “We’ve come to bury FTAA, I even brought a shovel.”

“We’ve almost all of us been down that road, and it didn’t work,” an anonymous diplomat for one of the holdout nations told The New York Times at the time. “The United States continues to see things one way, but most of the rest of the hemisphere has moved on and is heading in another direction.”

It must be noted that the dissenting bloc at the Summit of the Americas does not necessarily represent a constant, united ideological front. Fernandez, Uruguay’s Vazquez and even the ostensible socialist Bachelet in Chile (as well as some of the surprising center-left victors in Central America) have shown themselves amenable to continued neoliberal trade policies – Lula in particular has continued along a course of privatization and alienated his labor base. The continuum, however, lies in their willingness to stand up to U.S.-written, supply-side-dogmatic trade pacts, as well as their pursuit of “mixed economies” whose domestic social reinvestments fly in the face of conservative “small government” dogma.

While Washington tolerates such administrations and has publicly drawn a bright line between them and those it deems heretical rogue regimes (Chávez, Morales, Correa and Nicaragua’s Ortega) that line is largely a fiction confined to U.S. borders. Differences have arisen between the more market-minded and the socialistas, such as the 2006 rift between Bolivia and Brazil over Morales’s nationalization of his country’s energy assets, in which Brazil’s state energy company, Petrobras, had considerable investments. But a summit between Chávez, Lula, Morales and Kirchner settled the matter amicably, if grudgingly, with a frame for renegotiating Petrobras’s contracts, instead of a CIA-engineered coup.

The hard leftists and center-leftists might disagree on degrees of state activism, but, as Greg Grandin, professor of Latin American history at New York University, wrote in The Nation in April 2006, “they are also highly dependent on one another, especially in their dealings with the United States. For Chávez, besieged during the first three years of his administration, the election of sympathetic regional allies . . . came just in time to help him shore up his position and push back his domestic and foreign opponents. In return, the confrontational Chávez provides cover to his more circumspect counterparts, drawing Washington’s anger. If it were not for its quarrel with Venezuela, the United States would certainly be less tolerant of . . . Brazil’s opposition to the [FTAA] and Chile’s refusal to support the invasion of Iraq.”

Indeed, the Pink Tide’s common cause became even more evident late last year, when Venezuela, Argentina, Brazil, Bolivia, Ecuador, Paraguay and Uruguay signed the founding charter of the Banco del Sur. Surprising everyone, Colombia even requested membership. If the center-left nations are as wary of Chávez as the Bush administration says they should be, they showed no signs of it, agreeing to headquarter the bank in Caracas. The new lending institution will pool the member countries’ capital reserves to be loaned out amongst themselves and neighbors, essentially in competition with the IMF and World Bank. But more importantly, it will lend on considerably less doctrinaire conditions and with an eye towards sustainable development – from basic road building to a trans-continental oil pipeline – versus the neoliberal emphasis on growth capitalism.

Figuring not just on Chávez’s established oil wealth but tapping potential reserves in Bolivia and, just recently discovered, Brazil, the bank could portend at least the first steps toward an intra-sufficient economic bloc, which, for the conservative status quo in Washington and on Wall Street, is the worst possible scenario. Proponents of neoliberalism, as a component of U.S.-defined “globalization,” have long couched it as a beneficent system of economic development, even if in reality it has maintained developing countries as neo-colonies with cheap labor and resources for the corporations of wealthier nations. The fear in the big business-embedded Bush administration in its remaining months is not necessarily of the ideological turn in Latin America, for there is no Soviet Union remaining with which to conflate smaller nations’ politics with greater global “threats.” It is that an entire community of nations might successfully buck off interdependence from the Great Power whose corporations have found such fertile climes in el Sur.

Recall that the Nixon administration’s problem with Allende in Chile wasn’t that he posed a Ruskie-puppet socialist threat to the region or the U.S. It was that his administration might become a case study in socialist-inclined government happily co-existing with democratic institutions, thus disproving the great Cold War myth, that only a certain dogma – of unfettered, elite-driven capitalism – fits neatly hand-in-glove with democracy. The Pink Tide, in all its hues of “blue,” has at long last disproved that. That Pandora’s Box has been opened in Latin America.

“Developing nations must create their own mechanisms of finance, instead of suffering under those of the IMF and the World Bank, which are institutions of rich nations,” Lula said in inaugurating the Banco del Sur in December. “It is time to wake up.”

Matthew Grimm is a freelance writer currently living in Iowa City, Iowa. He is also the front man of the best political rock band in the Americas, Matthew Grimm and Redsmear. He blogs at www.redsmear.com.