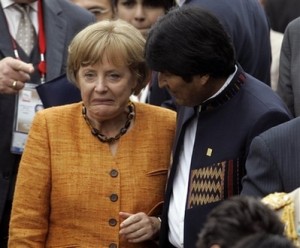 German Chancellor Angela Merkel, left, gestures as she listens to Bolivia’s President Evo Morales during the group photograph of the Fifth Latin America and European Summit in Lima, Friday, May 16, 2008. European and Latin American leaders are gathering in Lima to tackle climate change, high food prices and poverty.(AP Photo/Roberto Candia)