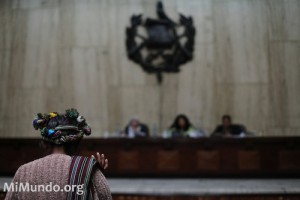 Witness Magdalena Marcos De Leon, Ixil Mayan woman from Nebaj, raises her right hand before beginning her sworn testimony during the sixth day of the historic genocide trial against former de facto dictator Efrain Rios Montt and his head of Intelligence Jose Mauricio Rodriguez Sanchez. Both are accused of genocide and crimes against humanity committed against the Ixil Mayan people during their de facto reign from March 1982 to August 1983. Ms. Marcos De Leon states: “After the army attacked our village, I saw how they captured my husband and decapitated him. I ran to the mountain with my five children and we remained there for a long time.” Guatemala, Guatemala. March 26, 2013.