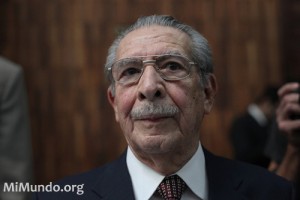 Former de facto dictator Efraín Ríos Montt listens in the courtroom inside Guatemala’s Supreme Court of Justice on the day when the long awaited Genocide trial begins against him and his head of Intelligence Jose Mauricio Rodriguez Sanchez. Guatemala, Guatemala. March 19, 2013.