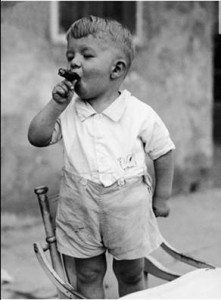 Unfortunately, I was sharing my office at the University with four other grad students, most of whom smoked, but none of whom would put up with the stench of Dutch Treats. So then I moved on to Pall Mall 25’s. Regular, filterless Pall Malls, but they came in packs of 25 instead of 20 – for the same price! Unfortunately, I was only able to find the 25’s available in one place: a gas station which, though close to my apartment, required a death-defying dash across an extremely busy (and crosswalk-free) highway. It was worth it for the while I was there, when I was young and spry, but once I left Minneapolis, Pall Malls – and specifically the 25’s – became too damned hard to find to keep it up as my home brand.

In Philly, Pall Mall-less, I floated freely through all sorts of nonsense. I smoked Camels until I realized that everyone smoked Camels. I never touched Marlboro’s for the same reason. I spent a few weeks with Lucky’s, then with Chesterfields. Bogart smoked Chesterfields. In fact, Chesterfields were the smokes that killed Bogart. That alone made them a class operation. Unfortunately, they also gave me a ringing headache from the first draw.

I even made the mistake of going snooty a couple of times and trying Turkish cigarettes, which were just too wimpy for my taste, and burned too quickly. Then I tried those Black Russians – the smokes wrapped in black paper, which I thought was pretty neat for a box or two, until I realized that they had no kick whatsoever, and left me looking like a sissy. Same with Dunhills. Too expensive, too sissy.

When those Injun smokes, American Spirit, were first introduced into the marketplace, I was sent a press kit with two packs and a bag of rolling tobacco. Well, I tried them, and not only did the smokes themselves taste like dried, shredded cat turds rolled in toilet paper, but the press kit was full of all sorts of New Age hooey about “the Great Spirit” and “taking time out to get in touch with yourself.” I ended up writing a story for the paper I was with at the time called “Me Smoke ‘Um One Heap Foul Peace Pipe!”

I forget, exactly, how it was that I settled on Kools. Maybe it was the clean, minty taste. Maybe the fact that fewer people are willing to bum these – except for the bums, who love them, and love me, in turn, for doling them out. And come the revolution, I think I’d like the bums on my side. Kools are an easy way to get and keep them there. I also remember I was very impressed to discover that there was a time when the fine folks who make Kools were packing the filters with asbestos and fiberglass (in order, I guess, to keep them cool) – and that this shit was ripping smokers’ lungs all to hell.

I think it was with that knowledge, and with the Kools themselves, that I consciously decided to use cigarettes as a means of slow suicide. So now I combine the smokes with the booze and the bad, greasy frozen food. The more difficult I find it to breathe, the harder it is to walk up a flight of stairs or carry things, the more greenish-brown globs of thick phlegm I hack up over the course of the day, the more I wheeze into the telephone – well, dammit, the better I feel.

Jim Knipfel is a free lance writer living in Brooklyn, New York. He is the author of the memoir, Quitting the Nairobi Trio, the novel, The Buzzing and several other works. His new novel, Unplugging Philco (Simon & Schuster) hit the streets on April 14th of this year. His weekly column, Slackjaw, can be read at www.electronpress.com