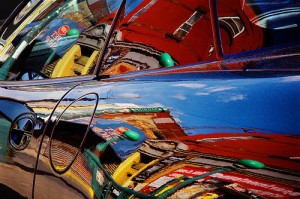 Maybe this happens to everybody, but they just don’t talk about it. They’re probably afraid that if they mentioned it to anyone, they’d sound, I dunno, crazy. But it’s like this.

Sometimes I step outside the front door of my apartment, and suddenly find myself very confused by the world.

I’m not talking about large-scale issues. I’m not thinking “why do men fight wars?” or “Why don’t people realize that new technologies are accelerating our loss of humanity?” None of that shit. It’s much more basic than that. I mean the world itself – the physical things around me – seem strange and confounding.

Buildings seem to loom at strange angles. Human faces seem to be not just identical, but monstrous and twisted. Voices sound like gibberish. Even walking seems like a strange thing and suddenly requires conscious effort. One leg, then the other.

It’s akin to a mild acid trip, but it’s not the result of drugs or alcohol (that’s a whole different story). It just happens sometimes, usually in the morning. Most of the time things are simple – I shut the brain off almost completely and just go about my business by reflex. Those other times, though, boy. I need to concentrate real, real hard to get where I’m going.

I’ve mentioned things like this before, I think, but it really hit me again this morning. I was out running my usual Saturday errands, and people and walls and fences appeared out of nowhere in front of me. A man in a car stopped and asked for directions to the hospital, and I had to make him repeat the question three times before I could parse things out and point him in what I believe was the right direction. I should’ve known from the start what he wanted – people in this neighborhood only and always want directions to the hospital.

I walked into the grocery store and froze. I knew I was supposed to be there and knew what general principles were involved in “buying groceries.” I knew the process, but still it seemed like nothing I had ever experienced before. All those products, all those packages – the colors and the white noise. It was almost overwhelming. Thank god the store wasn’t crowded at that hour, or I might have turned around at that moment and fled. Instead I grabbed a basket and moved down the aisles, grabbing this and that while everything seemed to flow around me. Thank god the grocery store was big enough that I could cover myself okay. If I’d been in a narrow and cramped bodega, I would’ve been lost.

As I waited in the checkout line, my eyes scanned the magazine covers, and I could find no discernible, qualitative difference between Time, Women’s World, TV Guide, the crossword magazines and The Weekly World News.

“Humans Are Evolving Back Into Apes!,” the Weekly World News headline screamed.

Well, yeah, I thought. It seemed so obvious. I figured everyone knew that already.

Then the woman at the register was asking something of me – demanding, even.

What does she want? I thought, and said “Hmm?”

“Twenty, three, forty.” she said, and it took me perhaps a little too long to figure out what she meant by that odd string of numbers. I looked behind me, hoping there would be someone there to help me out, but I was alone.

Finally, slowly, the old internalized ways took hold again, and I reached for my wallet.

“I understand,” I told her.

Once outside in the warm gray drizzle again, I became aware of what was happening. It didn’t change the fact that everything seemed weird and wrong, but at least I was able to take that step back now and think.Yes, things seem weird from a safer and saner vantage point. I was able to recognize that the problem was one of perception and nothing else. Things were as I’d always remembered them – I was merely perceiving them off-kilter.

It was kind of like the time I woke up in a hospital in Minneapolis after a long drug-induced hallucination and thought, “Oh, I’m completely insane” – only to realize that being able to make that observation meant I wasn’t insane at all.

In this case it didn’t help dispel the crazy perceptions themselves, but I stopped worrying about them. I had a better sense of what needed to be done, even if the streets and storefronts and people around me seemed like a landscape from some distant, outlandish planet.

I got home without too much incident and put the various groceries where they belonged (I think – I guess I’ll find out later). Then I talked to my girlfriend, Morgan, which brought things back around again. What’s more, in my apartment everything seemed familiar and comfortable once again. I knew where I was and what things did.

Part of the problem, I think, was the fact that it was early, that I hadn’t yet had enough coffee, and that my brain was still waking up. Things hadn’t quite snapped into place yet, so the perceptions of a fluid and changing world simply flooded in willy-nilly, without the brain yet able to register things like “perspective” or “depth perception.”

It’s funny how the body wakes up in stages during the first hour or two of the day. Not just the brain, but things like digestion, coordination, the respiratory system. At least with me that’s the way it works. Brain comes last.

I poured myself another mug of cold coffee and downed it, then lit the morning’s eighth cigarette. Yes, things were starting to come around. A glance out the front window a few minutes later revealed that things seemed normal again. Still frightening, still strange, but at least recognizably so.

Meanwhile, I set myself the task of trying not to think about what schizophrenics, alien abductees, or Philip K. Dick might have to say about the morning’s grocery run.