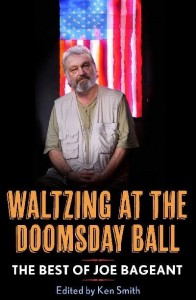 Well, even though our buddy Joe is dead, we just can’t get enough of him. Nor, it seems, can many of his other loyal readers. Thankfully, for those of us around the bar who miss his top-shelf wisdom and his speed-rack wit, Joe’s good friend Ken Smith compiled and published fifty of Bageant’s best essays in the new book, Waltzing at the Doomsday Ball. Scribe Publications, 2011.

The La Cuadra editorial board (a.k.a. Mike, John and a bottle of Mezcal) decided to run one of those essays in this issue. Maybe reading this will encourage a few of our readers to pick up any of Joe’s three remarkable books. Along with Waltzing, Joe also published Deer Hunting with Jesus — Dispatches. From America’s Class War, Broadway Press, 2008, and Rainbow Pie — A Redneck Memoir, Scribe Publications, 2011.

For readers who’ve come to know Joe through La Cuadra, well, here’s another little treat for you.

Waltzing at the Doomsday Ball is currently available for Kindle through Amazon and in paperback if you happen to be in a bookstore in Australia.

Let it be known: we’re offering a free bottle of Ilegal Mezcal to whomever first brings a copy of the book down to Café No Sé. Together we’ll raise a glass to our absent friend.

This essay was written in the Spring of 2005.

Raise your glass to the hard working people

Let’s drink to the uncounted heads

Let’s think of the wavering millions

Who need leaders but get gamblers instead

Salt of the Earth, The Rolling Stones

I stopped into Larry’s Gas ’n Grubs for my regular morning commuter coffee mug refill and lo and be damned! There was my hirsute 300-pound friend Poot working at the counter. I said, “What the hell are you doing ringing up my coffee at this crap stand? You’re supposed to be a welder, fat boy!”

It turns out that Poot, who’d lost his job with a metal fabricator, took on a little private contracting work. However, he couldn’t afford to get his contractor’s license and was busted for working without one. And got thrown in jail for it too. Somehow I would have thought it was a lesser offense than that.

Now he is on jail work release to work at Larry’s Gas ’n Grubs, an area 6-location chain of convenience stores that regularly hires work release labor at super cheap rates. By court order Poot must work there at least until August and pay the great state of Virginia a big chunk of his wages for the privilege. This represents nothing less than chattel slavery under the local judicial system, impressments of the same sort as have always been practiced on blacks and poor whites here in the slave states. Throw them in jail, and then farm them out on work release to local industry and businesses in cahoots politically with local law officials and courts. In fact, in a new twist on the game, the masters of our little Virginia banana republic brought in a huge regional jail. It is now a provider of cheap local work release labor, even as the taxpayers foot the bill for housing and feeding the jailbirds, and the jailbirds seldom return to their hometowns up nawth, choosing instead to shack up with the fetching local wenches. You Yankees have no idea what Bush’s election has kicked off in the American South. Our congenital penchant for punishment and press gang labor has ushered in a new era of prison building unseen since the days of Uncle Joe Stalin. Down here we know what to do with uncooperative folks like the hapless Pootie and the dope fiends our prison industry imports in from seven other states: Lock ’em the fuck up and make a profit on ’em. Rehabilitation, Republican style.

But getting back to Poot. When crap happens to working people, it’s usually a domino line of crap. It is bad enough that Poot lost his apartment when he landed in the hoosegow, and will have to find a new one in August, along with a new job, unless he decides to starve to death by remaining at Gas ’n Grubs. He also lost his truck along the way. I am almost willing to bet that his life will never recover from this setback. Meanwhile, something even worse has come of this run-in with American penology’s gulag system of white trash labor: By court order Poot cannot set foot in Burt’s Tavern until August. He may not survive such a blow.

That was a week ago. Now it’s Friday and there’s nothing stopping me from making the usual ass of myself at Burt’s, with or without my fat hairy friend. Aaaaannd of course there he sits over in the corner of the bar! Stupid me. I should have known no court order could keep that 300-pounds of redneck sin out of a tavern. So there sits Poot explaining to Nance Kelly his talent for hooking up with the wrong woman. For the record, the wrong kind of woman is any woman: 1) whose name does not match the one on your marriage certificate, 2) who is middle aged and taking both progesterone AND thorazine or 3) speaks in tongues at church. Whatever the case, Poot has a snowball’s chance in the Sahara of ever hooking up with Nance. Poot’s “Drink until you want me” approach is not going to work on her.

Nance is 32, hillbilly cute, and raising two kids with the help of her mom. She drives a “deep reach” machine on the loading dock at the local Rubbermaid plant. For the benefit of you patricians out there, a deep reach is a kind of forklift that can reach 30 feet up and into stacks of pallets. They are usually driven by men, which makes Nance a “women’s libber” by working class labor standards. Active in her fundamentalist church, she does not drink and seldom dates, yet strangely enough she comes in here occasionally and sips on cokes (I don’t even want to know the psychology underlying that little game). Her coworkers call her “Termite” because of her stature, but we old farts in the back booth call her “Magnum Muff,” and when she parks that tush of hers on a barstool, well, we old geezers at Burt’s are reduced to humble wonder. Quite a few young ones too, I would suspect. But we are supposed to talk politics in these columns, aren’t we? (sigh)

Politically, Nance is anti-union, anti-abortion and vaguely aware of N.O.W. (National Organization of Women), which registers in her mind as “A bunch of lesbians out on the West Coast.” Nance is a Republican much as a fish is a creature of the ocean. Because of her caste in America (lower working class, Southern, high school educated, semi-fundamentalist Christian), she does not know a single registered Democrat. We’ve discussed it and neither of us could think of a Democrat she personally knew. “I know you,” she offered. “That doesn’t count,” I replied, “because I am a godless commie.” But the point is that for many working class Americans it is possible not to know a single person of liberal persuasion in daily life — which must seem inconceivable to urban and metropolitan Americans. A night in any tavern in this town shows why this is possible. Can you spell American C-L-A-S-S system?

Joe Bageant, author of Deer Hunting With Jesus and the master of www.joebageant.com, is one of America's most piercing social critics. He has been kind enough to allow La Cuadra to republish several of his essays and is threatening to come down and visit us at some point in the coming months. We plan to slay the fatted keg upon his arrival. We'll keep you posted.
Read more by Joe Bageant