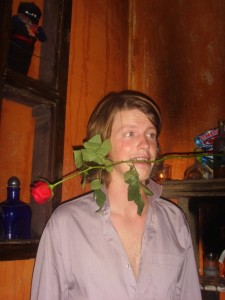 Guatemala unfurls from the fractured landscape of my memory in a vast expanse of broken glass and Christmas lights, cobblestones, coke-covered mirrors and sex. The time is only divided into two sections: with a girlfriend, and without a girlfriend. Beyond that, any distinct chronology fades, obscured behind a miasma of drugs, laughter, music, sex, cigarette smoke and booze. I am in a boat, rocketing across the opal blue waters of Lago de Atitlán with towering volcanoes scratching the belly of heaven. I am in a car, hung over, with a beer in my hand and no idea where I’m going. I’m in the bathroom of a bar bent over a mirror. I’m slinging drinks at the Mezcal Bar in Café No Sé. I am at home, sitting on the roof, watching Volcán de Fuego vomit clouds of black ash into a sanguineous sunset. All of it is melted and twisted together, temporally indistinguishable, existing only in the realm of the deep and personal. In my memory it is the people who lend shape and definition to the swirling mass.

Mike, my friend, my editor, my drinking companion. I remember him in quotes and flashes. On Mother’s Day, wandering out of the piña colada sunshine and into the bar and, I find him sitting at one of the front tables nursing a beer and watching motes of dust dance in the white light streaming through the open door.

“Hey man,” I say, or something like that, and I take a seat across the table from him, knowing I don’t have to bother asking for a beer. One will show up in front of me. He doesn’t say anything, just nods and tips his beer at me. I smile. “Did you call your mom yet?”

“Yeah,” he says, “I called her a bitch.” And we both burst out laughing. We laughed for a long time. It is one of the more offensive things either of us has ever uttered, and we always vied for the lead. One thing we shared was an fundamental inability to pass up the opportunity to crack stupid.

When one or both of us awoke with a throbbing hangover, feeling as though a menagerie of barnyard animals had emptied their waste directly into our brains we would meet to commiserate. He always told me “Remember, it’s like my father said. You don’t want to overdo it too much. The point is to be able to drink for the rest of our lives.” Then we’d laugh and have a cigarette. Mike casually pulling a pack of Marb Reds from the front pocket of a button up shirt, distended around his generous beer gut, offering me one, lighting it for me. Then he’d inhale his own and pause before exhaling tendrils of smoke up around his eyes, and into his short, grey hair.

John owned Café No Sé. The bar we all called home. He also owned the juice bar across the street. And the bookstore next door. He also had a defunct theater company and a successful mezcal business. He started this magazine.

I occasionally arrived at work, exhausted from the previous evening’s extravagancies, to stand reeling behind the bar, unable to talk comprehensibly, let alone serve drinks. John would walk in and say something like “You look tired,” at which I would nod my dumb assent.

“Why don’t you take a shot of mezcal?” he would suggest.

At first I thought it odd for an employer to recommend Hair of the Dog as a cure for his employee’s hangover, particularly while said employee was on shift. I eventually came to realize he viewed mezcal as a magical panacea that could cure everything from headaches to pancreatic cancer to general malaise with efficiency and absolute effectiveness. Agave based spirits were, to him, a gift from the heavens. Employment at the bar practically required one to drink during their shifts. Or perhaps it was just me. I think John noticed a causal relationship between my mezcal consumption and my alacrity, and therefore encouraged a certain amount of drinking in order to maintain the best bartending services available. Or maybe I’m just rationalizing. He certainly didn’t discourage drinking, at least not until the end when I had clearly lost control. In fact, he normally didn’t expressly encourage it, either. Unless he was drinking, too. Or it was a really good night. Then sometimes he would pull a bottle down off the shelf and wade through the crowd, pouring shots down people’s throats.

My favorite times with John were always after closing. Just a few close friends sitting around until four or five in the morning, discussing labor politics in Guatemala, or the hypocritical nature of Central American Catholicism, or pussy, or the novels of William Faulkner.

Once we sat for a long time in the back bar, just him and me, sitting on one side of the room and trying to put out a candle on the other side of the room by throwing shot glasses at it. We ran out of glasses, but we never did get that candle out.

I can remember almost no quotes from John now. It seems strange. I can hear his voice — the timbre, the cadence — his laugh sputtering up to become a series of quick “Ah ah ah’s,” like a cartoon vampire. But I don’t remember much of what he actually said. The phrase that most stands out is “It was beautiful,” spouted thick-lipped and dreamy, with far away eyes. He usually employed it in reference to incredible displays of intoxication. The day after I broke up with a long term girlfriend, the woman I had followed to Guatemala in the first place, I staggered into the bar in the early afternoon to find John sitting in the office.

“How you feeling?” he asked.

I think I muttered something monosyllabic.

“Man, you were on a tear last night. You smashed a bunch of glasses, swore at some customers, then punched Steve in the face.” He smiled at me, enjoying my obvious chagrin. And then that boyish twinkle came into his eye and he let out a long breath.

And I knew he meant it.

Mer arrived two or three times a year on a flight from San Francisco to sit in the bar with us and have filthy conversations. She’s in her 40’s, short grey hair, jeans and tee-shirts, a self described “diesel dike.” She and I would sit in the corner of the bar with Mike and John and whoever else was around, talking shit about everything and everyone until eventually the conversation disintegrated into a serious of sexually explicit non-sequiturs designed to shame the shameless. “One day Mer, one day!” I’d slur at her, “I’m gonna turn you straight for a night, and I’m just gonna RUIN you!”

And so on into the night.

Everyone liked Mer. Honest to a fault, always willing to help, never took shit off of anybody. She was incredible.