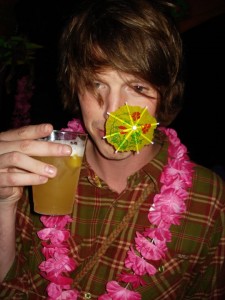 Tono appeared in the bar almost nightly, with his ascots, panama hats, tweed jackets and his paunch. He looked like he was in his 50s, but may have been older. He could dance tango with two girls at once, keeping them both twirling as he looped beneath their swinging arms. He is the only person I have ever met who could pass out standing up and not spill his drink. You would see him, standing in a corner weaving back and forth, a glass of rum or whiskey clutched in one hand for 20 minutes or more, then he would suddenly pop into wakefulness and stagger up to the counter, smile at me, order another drink and go back to dancing.

He had a deep, gravelly voice and a talent for turns of phrase honed in the international political arena; He was the Guatemalan Consulate to Portugal, though I never heard of him doing much in that capacity. Mostly he would sit and drink and say wildly inappropriate things while still managing to come off as charming.

“Kevin,” he would say after a lengthy disappearance from the bar area with a companion, “the bathroom floor is much too cold . . . At least that’s what she was complaining about.” And then he would laugh and light a cigar. When questioned about almost anything he would employ a phrase destined to become common among all who knew him. Someone would ask if we could have an after party at his place, drink some scotch, play some snooker, and he would look at them and mutter: “Tonight? I don’t know. Let me drink about it.”

The phrase became so embedded in our collective lexicon that we all heard it and said it without thinking. To the point where, upon my return to The States, I heard someone say “let me think about it” and felt momentarily confused.

There was Benito, a Frenchmen with a growth disorder that presented itself similarly to dwarfism, but, I’m told it was something else. It made his legs hurt and he overcame this by gobbling handfuls of narcotics and shooting cocaine directly into his thighs, after which he would waddle into the bar and drink 20 or 30 rum and cokes. Sometimes he would crawl into people’s laps and try to bite their nipples. Whenever Benito passed out, John carried him home and put him to bed, but it usually didn’t take.

Twenty minutes later a triumphant voice in a heavy Corsican accent could be heard ringing out from the doorway: “Everybody naked!” I don’t think Benito knew any other English phrases. At least none that he was comfortable with.

One night, after breaking up with his girlfriend, Benito arrived at No Sé even more hammered than usual, muttering French obscenities under his breath. He vanished into the back office momentarily, then emerged with a bottle of 120 proof liquor with a rag jammed into the top, nervously flicking a lighter in his other hand, apparently hell-bent on burning down his ex’s house. Someone took the bottle away and placed it on a high shelf where he couldn’t reach it. He disappeared once more, only to reappeared with another rag stuffed bottle. Again it was taken from him. It went on like that until the entire top shelf behind the bar was populated by a clinking row of Molotov cocktails. Eventually he passed out in one of the store rooms.

We pulled the rag from one of the bottles and passed it around.

On these nights, there is no place in the world like The Café.

Ally was my neighbor, my friend, my caretaker. She’s everyone else’s caretaker, too. She was the bar den-mother, always with a shoulder to cry on, an ear to listen, and an uncanny ability to call you an idiot and leave you feeling good about yourself. I desperately wanted her as a sister. I still do. Sometimes she would knock on my door at two or three in the morning and say “I’m too drunk to sleep by myself,” and I would sigh and let her in to curl up on my bed and pass out.

We talked about almost nothing other than sex. Constantly. And yet never lost our friendship in a pit of carnality. I remember one night we both went to pass out in Mike’s bed, he must have been out of town or something and I had a key to his apartment, and she turned to me and said “I really wanna fuck somebody tonight.”

“Me too,” I said. “But what are ya gonna do?” She frowned and looked at the ceiling.

“There were some cute boys in the bar tonight. You’re supposed to be my wingman here.”

“Hey!” I said, defensively. “There were a bunch of cute girls there too, but you weren’t exactly helping me out. Where were you on that one?”

And then we both rolled over and went to sleep. The next morning we were discussing the previous night’s events and arrived somehow at an analysis of that particular discourse. “Ya know,” I said, “normal people would’ve just had sex with each other in a situation like that. Especially considering how drunk we were.” She threw an arm around my shoulders and gave me a quick squeeze.

“We’re not normal people,” she said. “We’re awesome.” She was always comfortable, always friendly, and our interactions were never tainted by the threat of romance. I miss her.