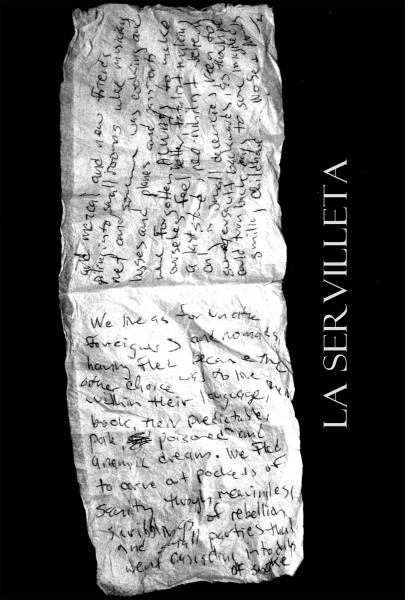 Camilla and Gustavo were the half-Swedish, half-Guatemalan Barbie-nightmare dream couple of Antigua. I used to work with Camilla on Sunday nights, and if we weren’t doing well on tips she’d take a few shots, peel off her bra, and flirt with whoever looked wealthy. It generally worked, although it left me to fill all the drink orders solo. I didn’t mind. We split tips and I figured she was putting in more than her fair share of effort. More incredibly, Gustavo never seemed to mind. I’m not sure how he managed to keep his cool in the face of such deviance. I admire him for it.

Canadian Pete showed up often, always wanting to talk about a piece I had published in this magazine a few years back. It was a black comedy about an ex-girlfriend getting an illegal abortion in Bangkok.

“I get to the end, and it makes me tear up every time,” he told me, again and again.

Syd, a curly haired, 20 year old musician from Pennsylvania came in almost nightly to drink and sing and play music for everyone whether she was being paid or not. Another friend, owner of one of the best restaurants in town, said of Syd one night, “She plays guitar with her breasts in the most incredible way.”

Then there were Kenny and Gustavo, a couple of young Guatemalans who played incredible music in return for free drinks. There was Juan Pablo the artist, Juan Pablo the trekking guide, Juan Pablo the bar owner, and several other Juan Pablos to boot. There was New York Rob, who nobody liked after a while because he talked too much. He and I hung out a lot during his stay, drinking, playing bar games, doing way too much cocaine. There were the Dutch girls, all of them lovely, some of them promiscuous drunks.

They were all wonderful.

There were tides of culture-sick Peace Corps volunteers every few weeks, stunned by the cosmopolitan nature of Antigua and delighted to consume something other than rice and beans. There were Guatemalan tourists from Guatemala City on weekends, waves of college kids taking immersion Spanish classes every summer, wealthy Mexicans, wandering Euro-hippies, pretentious Manhattanites ordering strawberry mojitos, prompting the bartender to point at the bottom of the drink menu where it said: “We don’t make fucking mojitos, pendejo.”

There were crazy artists from everywhere and musicians, too. Poets, writers, armchair philosophers, general miscreants, sexual deviants and the merely insane. All of them were drawn to Antigua and then to Café No Sé by a kind of casual madness, a lackadaisical prurience endemic in the place. It attracted us all. And it existed, all of it, outside of time, in a space all its own.

Only the people mattered. Not the days or nights, not the weeks, the hours, the minutes, the seconds. Not even the years. Time passed. Drinks were drunk. Plans were made and then ignored. Transients came, transients went. But that central cast remained, more or less constant, and it is their personalities, quirks, tales and cocktails to which I anchor my reminiscence. That’s the way it should be everywhere.

One night John got wasted and wrote a poem on a napkin. It was passed around, copied, and eventually published in this magazine. It belongs here once again, so I’m including it without his permission. I don’t think he’ll mind.

We live as fortunate foreigners and nomads, having fled because the other choice was to live within their language, their book, their predictable, poisoned, pale and anemic dream. We fled to carve out pockets of sanity through meaningless scribblings of rebellion and small parties that went  cascading into days of smoke and mezcal and new friends piling into small rooms where musicians met and someone was cooking and busses and planes and passports were forgotten. Always to make ourselves feel better, fatalists making a last stand, neo-nihilists believing only in small decencies, keen to summersault backwards as though we could turn back days to some imagined smiling childhood . . .

Beautiful, John. Next round on me.

The editorial board of La Cuadra would like to stipulate that no one in their right mind would believe that our Editor-in-Chief would ever say anything like that about his wonderful mother, even in jest. Further, we are all aware of Mr. Petrie’s issues with clearly remembering ANYTHING. Further, we think it was very cheeky of him to demand that the offending line be included if we were to publish this slanderous pack of lies. We also miss him very much and want him to come home immediately. Kevin, If you don’t, we’re going to call your mother.

First Person Shooter - Away With Children

Reflections on The Social and Economic Utility of “Grease”
By Carlisle Johnson
Sunday, July 25th, 2010