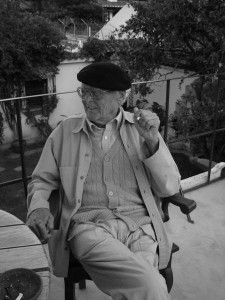 As Ivy enters the room, Bo is leaning against the bar. He exhales a plume of life and says, “Ivy, come here.”

She saunters and swivels. A smile, a laugh.

He takes another meditative drag. “Ivy,” his voice is staccato. He punctuates his sentences with cadenced pauses.

“Ivy, I know an old man like myself does not stand a chance with a young woman like you.” He tilts his head back and takes a drag of his smoke.

He continues, “But, Ivy, if I should die, and come back as a horse, would you train me?”

Ivy leans forward, throws her arms around his neck and kisses him on the cheek.

The flirtation continues. A week later, Ivy is at the  front bar slinging drinks to an audience of wannabe suitors. Bo glides through the door and it’s as though the bar is suddenly connected to a tobacco stained band of light, a fading ray, here for a moment to teach us about defiance and dignity and grand gestures.

Bo lights a cigarette and waits for Ivy to look his way. When she does he says, “You know, Ivy, if I was just 40 years younger…”

This time he gives her a kiss.

From The Recesses - My Name is Hector “Bullshit” Cullivera

From The Recesses - Near Death Idiots

From The Recesses - Middle Men