A few nights ago I met a sparkling, lovely couple from some septic backwater of the Great Neighbor to the North. They were overflowing with hope. They had the confidence of youth. They knew that through their activism and energy that their generation would make the difference.  Theirs was the cohort that would properly monkey wrench the gang in power, and gift back to this world its pure and unburdened soul.  Sweet kids, the sweetest there are, brand new backpacks, water filters and antibacterial gel, trekking westward through the Land of Nod toward Eden, having no idea how long the journey really is.  Not knowing that the very nature of the dream is to be forever receding, over the hills and far away.

I could feel Kurt Vonnegut on my shoulder when I laughed to myself and said to them, “But you know we’re doomed, right?”

I can’t say they liked hearing that.

It is good that these kids are willing to dedicate their spirits to what is most certainly a losing game, because the only causes worth fighting for are the lost ones.  And if they can’t see that now, then in the fullness of time, they will figure it out.  My only hope is that they do so with the wisdom of men like Vonnegut whispering in their ears.

Right now they are babies, beautiful bouncing babies, soft of flesh and decent of soul.  They are kids that know the non-elastic truth that we all are our brother’s keeper.  But if they don’t have a better bullpen than Michael Moore and Al Franken, they’re gonna get creamed.  They’re going to give up.  They’ll break and become bitter old fogies, or centrist Democrats.  And that would be a great tragedy within a larger one.

That would mean they died before they did.

For substance to feed their minds upon, I suggested a diet heavy on Arundhati Roy, Robert Penn Warren and Noam Chomsky.  For their bodies, I suggest acrobatic sex and long walks in the woods.  For their spirits I counsel good music, laughter and Kurt Vonnegut.

I suggest Kurt because the conversational byways of their nation are haunted by bandits like Bill O’Reilly, Sean Hannity and Ayn Coulter.

I suggest Kurt because they live in a world where honey-sweet lies spill like pigwash from the mouths of pundits, preachers and politicians alike.

I suggest Kurt because they live in a world in which they are told that trusting your neighbors (but doubting your leaders) means the terrorists win.

I suggest Kurt because they live in a world where Reality Television doesn’t include the news.

Hell, I suggest Kurt because they live in a world where guys like me tell them they’re doomed, without taking the time to explain why that is such a very good thing.

I first learned to embrace doom from books like Mother Night and Slaughterhouse Five. In those books I heard Kurt Vonnegut giggle as he showed me time and time again that human beings have a seemingly infinite ability to crucify other human beings, and that left to the worst angels of our nature, we’ll continue fucking one another out of our birthright to joy until we’ve turned the entirety of this hopeful blue planet into a red-rot charnel house.

Yet, in each of his books, Vonnegut reminds us that there are, despite  our inevitable end in the cold, cold ground, ways to remain clean; and they are, in no particular order, humor, love and hopelessness.

Have humor enough to laugh at madness posing as wisdom.

Have love enough to embrace your own failures and those of your neighbors.

And be hopeless.   Be completely, utterly hopeless.  But make it a hopelessness of your own design.

Off the shelf hopelessness – the kind you get by watching too much television, or hanging out with pious assholes – is a poorly woven hair-shirt; it is a bed of nails.  Instead, take Kurt’s implicit advice and look at this world, and your own frail body.  Know that the world-wide and centuries-long forces of greed, avarice, violence and injustice are beyond your abilities to remove or repair.

And then set to removing them and repairing them anyway.

We’re all in a sinking boat, but the stars look beautiful tonight, so bail.

Take the sadness of your own finite self and decide that you are not going to play their game to win.  Rather, play your own because it’s a blast. 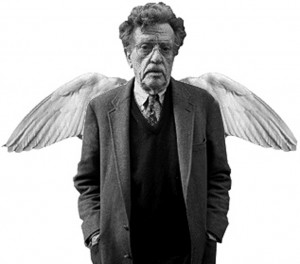 Dance three inches above their minefields of false meaning.  Take the fun out of every fundamentalist you find by reminding him that he’s a fool.  Keep singing to yourself in a tune of your own creation, “There is no way.  There is no truth.  There is no answer.”

Be what Kurt showed us we could be:  positive nihilists.

And, as you’re sure to get your eviction papers from this planet long before the last of us goes, leave something beautiful behind.

Here are some diamonds that Kurt Vonnegut dropped along the path.  I was lucky to pick them up at a time that mattered.  Maybe you’ll like them, too.

Hello, Babies.  Welcome to Earth.  It’s hot in the summer and cold in the winter.  It’s round and wet and crowded.  At the outside, Babies, you’ve got about a hundred years here.  There’s only one rule that I know of Babies – ‘God damn it, you’ve got to be kind.’

A Man Without a Country

Human beings are chimpanzees who get crazy drunk on power. By saying that our leaders are power-drunk chimpanzees, am I in danger of wrecking the morale of our soldiers fighting and dying in the Middle East? Their morale, like so many bodies, is already shot to pieces. They are being treated, as I never was, like toys a rich kid got for Christmas.

A Man Without a Country

From the Poem:  Worship

I don’t know about you, but I practice a disorganized religion.  I belong to an unholy disorder.  We call ourselves “Our Lady of Perpetual Astonishment.”

There was a message written in pencil on the tiles by the roller towel. This was it:

WHAT IS THE PURPOSE OF LIFE?

To be the eyes and ears and conscience of the Creator of the Universe, you fool.

And here is my final goodbye to an old friend:

He’s left the building.  He’s hit the tracks.  He’s kicked the bucket.  He’s bought the farm.  He is a was.

He’s fallen down and bumped his head.  Now he’s dead.

Our civilization is careening wildly down the carretera, but we might just have time to look back through the rear-view mirror and see an old man standing by the side of the road, smiling.  We’ve just got the time to roll down the window and toss him thanks, a few cigarettes and our love for the long walk he’ll be taking over the hills and far away.

We enjoyed it all.

Sorry to see you go, and I’ll carry your thoughts with me for the rest of my days.

From The Recesses - Ruminations At A Wedding

From The Recesses - Everything Was White