His name is actually James Edward Andrew Hanover, and if you think that’s a mouthful for a kid from Upstate New York, know that he very narrowly escaped “Clinton Dewitt Hanover IV.” I met him first during elementary school, but the friendship didn’t take. I was hanging with Charlie Martin, who was one of those two-name people, like Charlie Brown or Vida Blue. One day, Charlie Martin took me down to the Unitarian Universalist Church of Binghamton — one of the ugliest structures in all of architectural history — and his U.U. buddy, James, was there. I remember him as being on fire, and by gosh, that particular first impression was dead on.

He lived in Montrose, PA, and seemed to find that fact entirely interesting. Later, I’d learn that Jim finds almost all facts (and pseudo-facts, and conjectures and straight-up falsehoods) interesting enough to dissert upon. I remembered these things from that first meeting, but neither he nor the Unitarian Universalist Church captured me at the time.

Three years later, I was in ninth grade and lonely. The kids from my junior high did not generally go to the same high school, Binghamton Central, as freshmen, so I was surrounded by many strangers from the South Side’s MacArthur School (washed completely away by the flood of 2011).

I took to eating my lunch in a small stairwell off a side hallway that led to the library. Every couple of days Jim would saunter by and say, “Hey, want some M&Ms?” I don’t know if I remembered at first that I’d met him before. Maybe. But I would politely take a few, thank him, and then he’d talk. About history. Politics. A capella singing. James Taylor. Godknowswhatall. And there you go, I had a friend.

One day I asked Jim where he got the two 12-ounce bags of M&Ms he always seemed to have, and he suggested I meet him the next day out in front of the school right after fourth period. I did and Jim started talking while he walked across the street. And he just kept talking, loudly and dramatically, while he walked into the Giant Supermarket. Without pause, we went straight to the candy aisle, picked up two bags of M&Ms, and walked out.

I was terrified and amazed by this Artful Dodger.

I had a short-lived affair with kleptomania after that. One time, Jim and I nabbed two cheap shirts at Philly Sales — our hometown, low-rent discount store — for our long-distance girlfriends. I don’t think those gifts ever reached their destinations, but that was hardly the point.

Part of Jim’s appeal — or, to others, quite the opposite — was his flamboyant wackiness. He’d sing at the drop of a hat . . . no, a pin . . . no, nothing needed to drop. He’d just sing. It might be falsetto Frankie Valli, Swedish folk songs, Russian drinking songs, or improvised tunes off the top of his head. He’d make up one on the spot about latent homosexuality (I’m Just a Lonesome Cowboy), or Russian history, “Yermak was a Cossack, ya see, who understood being Tartar Khan.” At parties, you never knew what you’d get. One time, he burst out of the bathroom in medicine-cabinet-improvised whiteface, calling himself “Kaopectate Man.” At least he didn’t break into Al Jolson.

At his core, Jim is a performer, a star of the stage, a bullshitter nonpareil. Telling lies, or to be charitable, bending the truth, works best when you are brilliant and have a great memory for trivia, and Jim’s mind is like the world’s largest filing cabinet, just tipped over.

One year at the Rooney Fest, a bluegrass and old-time music festival held outside of Binghamton, NY, a friend brought five gallons of 13-bean salad for our campsite. I shit you not. I want you to imagine just how much bean salad that is and then realize that there is just no way for any number of campers to eat it. To deal with our bean-salad surplus, Jim made up a game called “Truth or Bean Salad.” In it, Jim would state some “fact,” and the players would determine whether it was the truth. If they determined it was not — if they determined it was bullshit, aka, B.S. — the players would pelt him with handfuls of bean salad.

Another variant — minus the beans and suitable for indoor play — is “Dates.” In this one, you call out a specific year after 1000 AD, and Jim instantly tells you some historical event that happened during that trip around the sun. The players determine whether the event is historical or complete bullshit. It’s actually quite difficult. Jim’s just like that somehow:

Jim, immediately, “The Battle of Hastings.”

The last time I saw Jim, we played Dates, and a friend’s teenage son demanded to be the historian. I was astonished at his chutzpah (nobody is Jim but Jim), and we called him on his bean salad, but, man, that’s a ballsy kid. He’s got a future, methinks.

Over our high school years, Jim and I went to a bunch of Unitarian Universalist youth conferences where the metaphorical bean salad flew perhaps more freely than it did anywhere else. One of our bits was telling new kids that we were twins.

Now, we’re not the same height, not particularly similar looking, have noticeably different eye color, and well . . . there’s no way we could be identical twins. But all that would be explained away by Jim, and invariably the other kids would buy it. 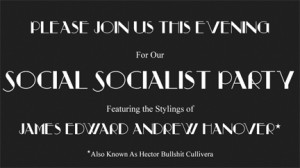 I’m not sure how this started, but all the guys from our youth group started writing “Hector Cullivera” on our name tags at one of the conferences. This quickly evolved into, “Hector Bullshit Cullivera,” then declined to “Hector B.S. Cullivera.” It was a kind of “I AM SPARTACUS!” thing for us. Solidarity in absurdity and bullshit. That early commitment to absurdity proved fertile ground for an actual belief system in later years.

One of my bon mots is “Nobody deserves nothin’.” I mean it, of course, both ways. It’s kind of my pithy distillation of John Rawls’s Original Position thought experiment. If anyone ever deserved success based on genius and ability, it would be James Edward Andrew Hanover. He is the most brilliant person I’ve ever encountered, with talents in almost every human direction. In the world that is not a thought experiment, he’s struggled with money and work, like we all do. He’s doing fine these days, with a good job with a major technology company as something of a high-end technical sales representative.

But nobody deserves nothin’. And I get angry hearing and reading worship of people like Steve Jobs — who deserves nothing — in a world full of brilliant, hard-working, creative people. Nothing happens that benefits us all without all our participation. And if that makes me sound like a communist, fine. Jim could undoubtedly tell you which one.

Truly, I’m a Social Socialist, committed to a grand time for the folks around me. And if I’m having a Social Socialist party (not Party), I want Jim as the entertainment. Who better than the Father of the Foolish Trotskyite League of Binghamton (FTLB)? Yes, he admits that their membership (2) experienced the requisite ideological schism, but that’s not the point, is it?

What was the point of all this absurdity, again?

This one goes out to a man I love.

Adam Wilcox lives and works in Rochester, N.Y., with his wife Anne and their three children. More of his work can be read at www.medium.com/@AdamAWilcox

Adam Wilcox lives and works in Rochester, N.Y., with his wife Anne, their three children and Violet, their Bernese Mountain Dog, More of his work can be read at www.medium.com/@AdamAWilcox
Read more by Adam Wilcox

From The Recesses - The Parting Glass

From The Recesses - Remembrance Of Sleaze Past