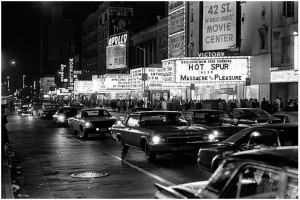 For some of us back in the day – or maybe just the über-alienated twenty-something nihilist pop-culture junkies like me – the movie Taxi Driver was our Wizard Of Oz. And if Travis Bickle was our gun-toting, whore-saving Dorothy, then the piss-yellow brick road that led to the Emerald City was New York City’s 42nd Street.

Once upon a time, 42nd Street between 7th & 8th Avenues was quite simply the greatest movie strip in the world. And back on any given day or night in the ‘70s and ‘80s, it resembled nothing less than Hell’s Midway. With its rows of elaborate neon marquees blazing on both sides of the avenue, ‘The Deuce’ offered a jaw-dropping selection of 30 different movies to choose from at more than a dozen different theaters. With a couple of bucks and a few hours to kill, the entertainment possibilities were limitless as heroes, psychos, slashers, muggers, bloodsuckers, shape-shifters, pimps, prostitutes, perverts, mad scientists, escaped mental patients and more all populated movies for audiences that were often comprised of the same. Depending on your point of view, it was either a revealing glimpse of life’s infinite possibilities or the sleaze-fiend’s equivalent of Discovery Channel.

History lesson: 42nd Street was, for better or worse, ‘America’s Entertainment Center’. From its golden age in the 1930s as home to Cole Porter, Helen Hayes and The Marx Brothers through its harrowing heyday as home to Bruce Lee, Seka, Charles Bronson and every degenerate in the Big Rotten Apple, The Deuce was King. Many of these theaters – complete with ornate marble lobbies, stunning frescoes and multiple balconies – had been built to house the nation’s leading musical, drama, vaudeville and burlesque acts. During the Depression, they were converted to huge-screen movie houses offering double and triple bills of second and third-run Hollywood features.

As a boy, I’d caught tantalizing glimpses of the street on local television news from the safety of my suburban cocoon, or through the windows of a school bus on class trips to Manhattan. By the time I was 14, I’d regularly cut school to explore NYC. A culture-starved kid, I’d spend the days at art museums, repertory cinemas and bookstores, but as dusk fell always found myself drawn like a beacon back to 42nd Street and its blaring mosaic of grindhouse marquees, garish movie posters and mighty tides of twisted humanity. It was a magical land of unrepentant visceral stimulation, a scene that promised love, hate, sex, death, self-destruction and redemption in equally damaging and delicious doses. No, I hadn’t ‘found a home.’  But the unleashed young misanthrope in me knew that it was gonna be one hell of a treehouse.

Think about it: If you felt you had to see, say, E.T., would you rather pay top dollar to watch it with a bunch of stuffy assholes on the Upper East Side or spend $2.50 to experience it with every deranged felon in the five boroughs plus a second feature of Ilsa: Harem Keeper Of The Oil Sheiks? The Deuce offered literally tens of thousands of remarkable double or triple features during which you could smoke anything, drink everything, shoot-up, jerk-off, eat, sleep, shit, piss, fuck or kill, all from the comfort of your theater seat.

From The Recesses - The Mob and Me

From The Recesses - God Bless You Mr. Vonnegut

Or The Case For Positive Nihilism
By Michael Tallon
Wednesday, December 26th, 2007